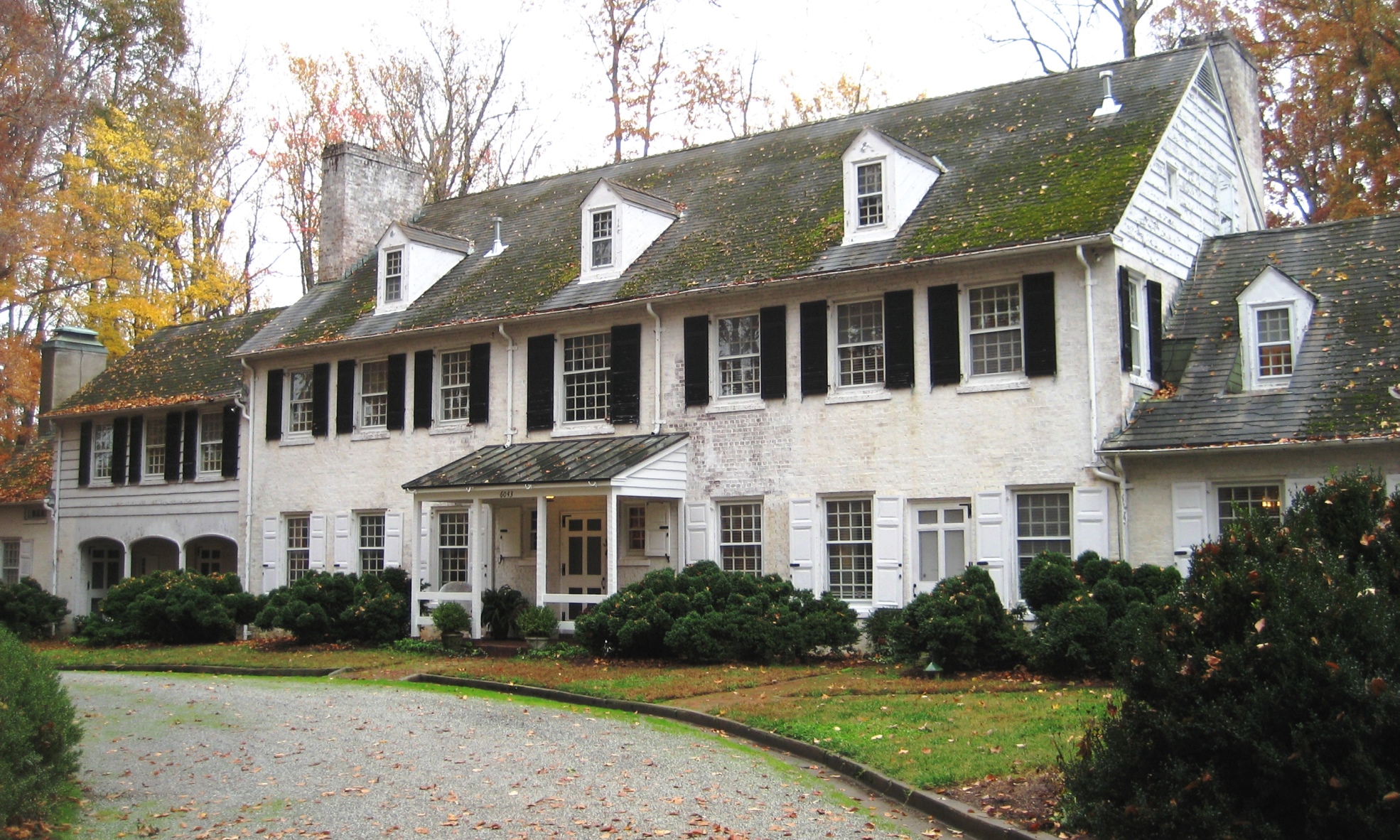 Sited on a bluff overlooking the waters of Lake Brandt is a classic Colonial Revival house with a broad white portico reminiscent of Mt Vernon. The similarity to the home of George Washington overlooking the Potomac River in Virginia is not coincidental. The matron of Hillsdale was a great admirer of Mt Vernon, and upon returning from a visit from the historic house museum in 1922, she embarked on an ambitious plan to construct her own estate inspired by Washington’s home. Hillsdale Farm, as the estate would be known, remains a well-preserved and notable country manor with a full expression of outbuildings, a lake, and even its own water tower.

Construction on Hillsdale Farm was begun in 1929 by Margaret and Lunsford Richardson III. Lunsford was one of two sons and three daughters of Vick’s VapoRub founder Lunsford Richardson II. Lunsford’s older brother, Henry Smith Richardson, began a magnificent home in Greensboro’s Irving Park in 1928 designed by Philadelphia architect Charles Barton Keen. Keen is well-known in North Carolina for projects such as Reynolda House in nearby Winston-Salem. As Lunsford was an avid hunter and fisherman, he elected to build his home on a 2,800 tract of land off Lake Brandt Road north of the city. Though Lunsford chose the bucolic location, his wife Margaret was said to have been so charmed by the Colonial character of Mt Vernon that she sought the services of one of the best Colonial Revival architects in the country to design her own home, Richardson Brognard Okie.

Okie was a Philadelphia-based architect who developed a national reputation for designing splendid sprawling country estates using America’s earliest architecture as inspiration. His clients included prominent civic leaders and businessmen as well as museums. In 1930 he drew plans for reconstruction of William Penn’s home Pennsbury Manor followed by specifications in 1937 for the restoration of the Betsy Ross House. His plans for Hillsdale Farm were made in consultation with Greensboro architect William Holleyman. Hillsdale Farm is the only known commission in North Carolina of Okie.

Okie’s Colonial Revival designs were notable in that they applied materials and design features of colonial period structures into new building construction. The resulting structures often appeared to be centuries old, when in fact they incorporated all of the conveniences and spatial uses required of mid-twentieth century families such as modern kitchens, private bathrooms, laundry rooms, garages and walk-in closets. Okie used several design techniques to assure the illusion of history, such as rambling floor plans that appeared to have been added organically through time, massive masonry chimneys, and fine hand-carved woodwork. His trademark detail that serves as a signature of his work is use of hand-wrought hardware on doors, cabinets, and shutters that provide an authentic and sometimes whimsical appearance.

Constructed at the crest of a hill, the house is surrounded by various outbuildings including a multiple car garage, and a play house. To the west stands a water tower, installed to assuage Margaret Richardson’s fear of fire engulfing the house. To the north of the estate beyond a stand of mature hardwoods located within a circular drive is a large lake that served as a canoeing and swimming locale with a bath house and a pump house.

The house is distinctive in having two different elevations. The

south elevation features a two-story full-width portico supported by square wood columns and topped by a Chippendale-style roof balustrade in the fashion of Mt Vernon in the 1920s (image, right). Later restoration of Mt Vernon removed the roof balustrade, but the feature remains a part of Hillsdale Farm. The north elevation takes the appearance of a rambling Mid-Atlantic farmhouse with a central shed-roofed porch, dormer windows, and flanking wings. To heighten the illusion of history, a one story log kitchen was erected as part of the house to the northwest. Interior elements include a 30 x 36 foot living room, teak floors, grand fireplaces, hand-forged iron hardware, raised paneling, and original light fixtures from the 1920s.

The Richardson family enjoyed the house as their primary residence for only five years, at which time they relocated to Greenwich, Connecticut. There, Lunsford was best known for his leadership of the Vick Chemical Company during a period Vicks became a product known around the world. The house was retained for use during holidays and vacations, during such a stay Lunsford suffered a heart attack and died in 1953. Margaret returned to the family home in the early 1970s, and died in 1979. Hillsdale Farm left the Richardson family in 1983.

The property remains well-preserved as a private residence. In November 2010, the farm was designated as a Guilford County Landmark Property for its authenticity, quality of design, and associations with architect Ogie and civic leaders Margaret and Lunsford Richardson.