A Hollywood Dream House in Greensboro 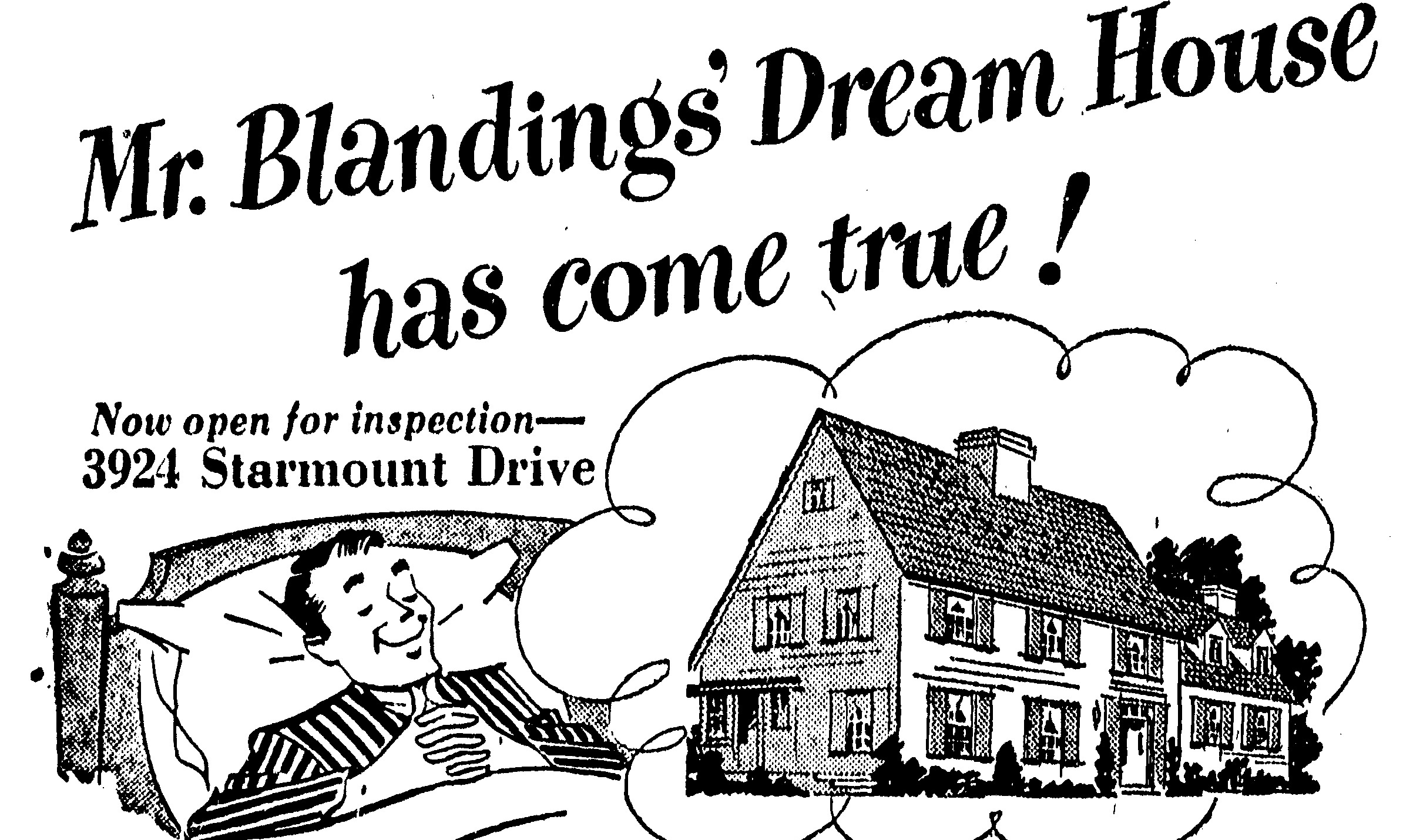 The comedy film “Mr. Blandings Builds His Dream House” was released in 1948. It enjoyed a distinguished pedigree – produced by RKO Radio Pictures, directed by H. C. Potter, and showcasing stars Cary Grant, Myrna Loy, and Melvyn Douglas. Although the movie attracted modest audiences, it was cleverly paired with a national promotion of “dream houses” in 73 cities across the country, including Greensboro. The movie-inspired model homes were not just public relations events to stimulate movie ticket sales, but they were also used to jump-start interest in home appliances, local home construction, and furnishings activity.

The film was based on a book of the same name, written by Eric Hodgin in 1946. The basis of the storyline revolves around two primary characters, Muriel and Jim Blandings, who flee their cramped city apartment for an expansive new home in the country.  Over the course of the film, the characters are confronted with numerous challenges involving design and home construction, but persevere in securing a comfortable residence in spite costly setbacks and troubles. The movie’s Greensboro premier was held at the Carolina Theatre on September 8, 1948.

RKO Producer David O. Selznick and the General Electric company sought dual interests in promoting the Blandings film with its release in 1948. RKO worked with local GE dealers and homebuilders to commission near-replicas of the Blandings dream house. Each house was stocked with GE appliances, and was finished and furnished by other local contractors and suppliers. The result was a nation-wide event that cross-marketed the film as well as material goods.

The Greensboro dream house was constructed on a hillside lot located at 3924 Starmount Drive overlooking the Starmount Forest Country Club golf course. The Starmount neighborhood was re-branded from the earlier 1920s-era Hamilton Lakes development that suffered with the Great Depression. The Blandings House was a creative way for home builder The Starmount Company to promote the neighborhood in the earliest years of post-war construction boom.

Local General Electric dealer Nash-Steele-Martin was likely the catalyst for the Greensboro house, one of just two such projects in the state (the other was in Rocky Mount). The dealer offered refrigerator-home freezers, electric sinks (dish washers), push-button stove ranges, “flatplate” clothes irons and all-automatic (clothes) washers from their showroom at 321 South Davie Street. All items were also on display in the model house.

The design of the Blandings house was not a replica of the silver screen version – rather, an inspiration from the original. The Greensboro variation (image, right) follows a basic theme including a two-story New England-style Colonial house. The film’s clapboard frame house featured three bays of openings with the entry to the far right on the main block, and a central chimney stack. A one-story wing continues to the right. The Starmount rendition is a two-story brick house with three bays, the center-most bay the entry. A one-story wing extends to the left of the main block, and a one-story porch extends to the right. Interior appointments were traditional and furnished by Morrison-Neese Furniture Company. “Gray and turquoise striped walls are found in the foyer, complemented by grey carpeting” reported the Greensboro Record, “On the right is the living room, decorated in red, chartreuse, and turquoise.”

The “Dream House” house was opened for tours on Sunday, September 19th, 1948 and remained open for 15 days. Admission to the house was free, and both the film and show house were promoted in local papers.

Greensboro designer Virginia Ford Zenke remembered her experience with the project in her 2006 autobiography “Midlife ~ Mid-Century ~ Mid-South” (available at the Blandwood Museum Shop):

“A house under construction by a land owning company, a client who was ready to buy the house, a downtown emporium that was willing to supply the furnishings, and the blue ribbon girls from the local garden club who did very proper flower arrangements produced the ingredients to make this a real show.  I do not know why I was selected to tie it all together as the decorator, except that the noted designers in the business had decided not to be a part of it.”

The Blandings house was purchased by Dallas and Allie Neese while it was under construction. Neese was employed as a salesman at the Odell Mill Supply Company. Its value was estimated to be $50,000, including appointments. The couple remained in their Starmount “Dream House” until 1982. The house remains standing in very good condition today.