The Secrets of Hamilton Lakes 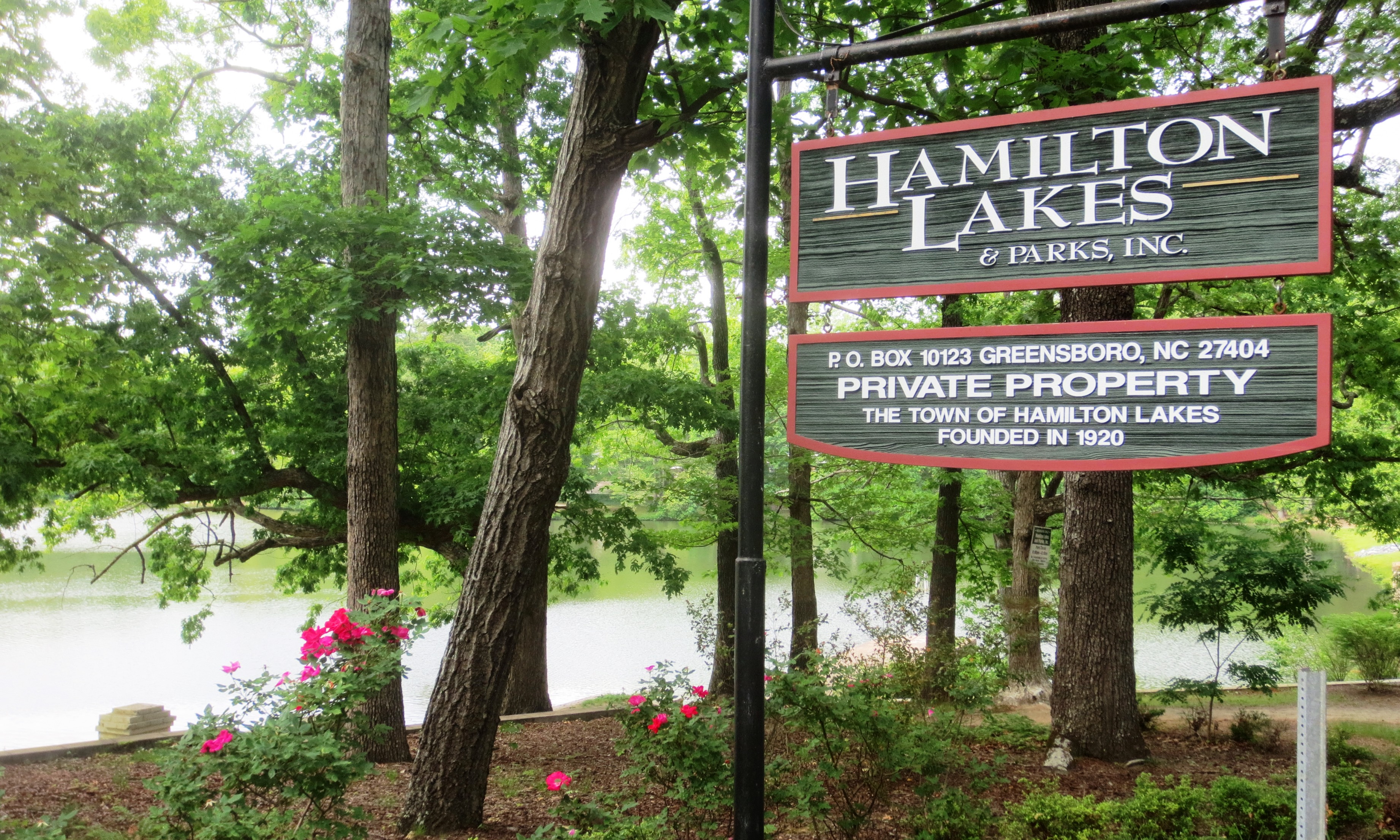 In spite of the high profile that the name “Hamilton Lakes” enjoys in western Greensboro, many in the Gate City are unable to attach to name to any specific location. Is the area part of Starmount? Is it the Guilford College area? Is it near Westover? Few people who zip along Friendly Avenue and West Market Street have ever seen the “lakes” of Hamilton Lakes.

The truth is – Hamilton Lakes is one of Greensboro’s most treasured places.

Hamilton Lakes is a community created as one of the largest assemblages of property in the history of the Greensboro. Beginning as early as 1900, Alfred Moore (A. M.) Scales, an attorney and nephew of a former North Carolina Governor with the same name, began to acquire tracts of land north and west of the city. With business partner Alexander Worth McAlister, the pair developed the easternmost tract of this land as the Irving Park golf course community in 1912, under the auspices of the Southern Real Estate Company.

Leveraging the success of Irving Park, Scales purchased farms owned by established Quaker families such as the Caldwells, Coffins, and Ballingers located along the primary thoroughfares west of the city. By 1922 he had amassed 4,683 acres that extended from West Market Street and Wendover Avenue on the south and east to Battleground on the north and Jefferson and New Garden roads on the west. With his land secured, he set out to create a resort-like community to accommodate the growing demand by middle and upper income residents for large lots in a bucolic and relaxing setting.

Scales’ vision resulted in the Town of Hamilton Lakes, incorporated 6 March 1925 and containing 1,600 acres, ten miles of roads – four of which were paved with distinctive tan-colored asphalt, water and sewers mains, and numerous recreational opportunities such as playgrounds and lakes (image, right). Scales, as mayor of his newly formed village, marketed the community to prospective homeowners as:

“Out from the crowded streets of the town, far from the congestion and traffic, a beautiful village is designed to soothe the senses. Parks and lakes replace crowded corners – the songs of birds, the noise of motors and trolleys – and flowers and shrubs bloom on every side. Thousands of rose bushes grace the roadsides, and dogwood, redbud, and laurel have been planted in the work of beautification.”

Hamilton Lakes expanded on the prospect of a recreational lifestyle established with his earlier development, Irving Park. Irving Park had a country club and golf course, but Scales expanded recreational opportunities in Hamilton Lakes to include “Lakes – tennis courts – bowling greens – wading pools – parks – gardens that are scattered over the village. Plan to come out and live where you play.” Central to the pastoral lifestyle theme of the neighborhood were two lakes; Lake Euphemia (named after Scales’ mother) and Hamilton Lake that were impounded behind decorative fieldstone dams (image, right). The large lakes provided a focus for the community, and distinguished Hamilton Lakes from any other community in the Gate City.

Though Scales broke new ground in offering amenities, he continued the tradition in Greensboro of dedicating lowlands for use as park space and encircling these natural spaces with curvilinear roads. Begun in Fisher Park in 1901, the technique allowed for Sunday afternoon drivers to enjoy scenic vistas and architectural confections from opposing sides of their car. Scales called these parks “dales” and incorporated four such spaces in his plan: Keeling Dale, Erskine Dale, Kemp Dale, and Nut Bush Dale.

The earliest houses were erected in the neighborhood in 1926 and 1927, many designed by distinguished architects.

Likely the first was Scales’ own house, a grand neoclassical composition at 1207 Lakewood Drive (image, right). The house was designed by architect Christopher Gadsen Sayre, at that time a resident of the city, and an accomplished architect who was among the first in the state to be licensed. The brick house overlooks Lake Hamilton and features two remarkable facades: one focused landside and the other looking lakeside. The landside elevation is formal with a classical entryway centered within eight Corinthian pilasters, four sets of French doors and a full modillion cornice. The lakeside is just as elegant, with a grand portico topped by a Chippendale balustrade.

The Ruth and Joseph R. Morton House at 302 Kemp Road West is attributed to Baltimore architect William Duncan Lamdin, a partner in the firm Palmer, Willis and Lamdin. The firm was proficient in designing homes of early American and European-style architecture, having composed numerous estates and educational buildings in the Mid-Atlantic. The Norman-inspired house features sweeping rooflines of multi-colored clay-tiles, a conical stair tower, and a massive chimney. The home was complemented by the surrounding gardens that were designed by Ruth Morton The Morton House is the only know structure designed by this firm in North Carolina. Joe Morton was the founder of Morflex, a Greensboro-based chemical supplier.

The architectural momentum in Hamilton Lakes was so attractive that it lured the investment of one of Greensboro’s primary architects, Harry Barton. Barton, designer of the Guilford County Courthouse, the UNCG Quad, High Point Central High School, and the War Memorial Stadium, built his striking home at 104 Kemp Road West (image, right). The home is an exotic Spanish Colonial composition that includes a Spanish tile roof, stucco walls, and numerous details such as spiral columns, shields, and iron balcony and a quatrefoil window above the main entry. The house is one of the only examples of Spanish architecture in Barton’s vast portfolio of designs across the state.

In addition to the diversity of domestic architecture within Hamilton Lakes are impressive examples of stonemasonry in the form of utilitarian improvements such as dams (image, right), bridges, culverts, and recreation space. These stone features are crafted of native fieldstone, set with as rubble stone, and often sporting a semicircular arch motif for rails and guards. These features were likely constructed to enhance the resort-like atmosphere of the community, and are the most significant group of a family of stone landscape features that distinguish Greensboro from other Piedmont cities.

In the 1920s, golf was a growing sport, especially among the upwardly mobile leisure class that Scales was targeting to buy land and construct homes. To meet his high expectations, Scales selected the golf course design duo Wayne Stiles and John Van Kleek to plan a course for Hamilton Lakes. An amateur golfer, Stiles was based in Boston and oversaw the construction of over 100 courses throughout the country. His partner Van Kleek was a professionally trained landscape architect with experience designing municipal parks and playgrounds. By 1924, the pair formed their partnership to leveraged growing interest in golf course development into a nationally-recognized firm.

“In one of the most sightly sections, an eighteen-hole golf course is being built. It was designed by Stiles and Van Kleek, and constructed under their supervision. It will be of championship caliber, and provide a severe test for the most expert, as well as countless hours of pleasure for the beginner. The course will be open for play in the early fall.”

Stiles and Van Kleek specialized in designing challenging courses, and it is said they sometimes designed fairways beginning with the greens first. The greens were often hidden from the teeing ground by native vegetation, and the pair’s skill in cultivating the aesthetics of their courses is much admired. The course was the only one in North Carolina designed by this famous pair, and it has since been reconstructed twice, once in 1971 and again in 1999.

The golf course opened in 1930, an auspicious period in the history of the Hamilton Lakes community. The Great Stock Market Crash occurred in October 1929, but overbuilding in Greensboro in the years prior caused the financial panic that threw highly leveraged investors such as Scales into foreclosure with their lenders. Scales had received financing from the Sternberger brothers, Emanuel and Herman, investment partners with the Cone family and the Cone Mills Corporation.

Upon foreclosure, the 4,683 acre tract of land assembled by Scales became the property of Emanuel’s daughter Blanche Sternberger Benjamin and her husband Edward Benjamin.

To confront sluggish sales, Benjamin re-oriented Scales original vision for the Town of Hamilton Lakes by developing land closer to the city of Greensboro and extending West Market Street into the community (image, right). This provided a direct route to downtown Greensboro and Lindley Park Elementary school. Benjamin leveraged the new Stiles and Van Kleek golf course into the Starmount Country Club, so named by anglicizing the surname “Sternberger.”

With an improved market position and a strengthening local economy, sales of homes in the newer section of the community known as “Starmount Forest” gained momentum throughout the late 1930s.

In 1948, as part of the promotion of the H. C. Potter comedy film “Mr. Blandings Builds His Dream House” starring Cary Grant, Myrna Loy, and Melvyn Douglas, film producer R. K. O. Studios partnered with General Electric to construct 60 “Dream Houses” across the country. Starmount Forest was selected as the location for one of only two such homes constructed in North Carolina and opened for public tours and promotions.

Starmount Forest grew increasingly popular in the 1950s, yet its residents still lived in a primarily rural setting with few retail amenities. Benjamin examined several options to provide residents with shopping opportunities – including a village of shops along Madison Avenue – before choosing to recast an
unrealized subdivision known as Friendly Village as a suburban shopping center. Opened in 1957, the new Friendly Shopping Center featured popular

stores such as Belk, Colonial Stores grocery, and Woolworth’s, all with convenient access to a sea of 1,300 parking spaces (image, right).

In 1957, the Town of Hamilton Lakes was annexed into the City of Greensboro. The town’s small police force and other services were disbanded, but the community maintained its own parks and walking trails through neighborhood association dues and private contributions.

Into the twenty-first century, Hamilton Lakes and Starmount Forest remain popular neighborhoods that are defined by the vision of A. M. Scales and Edward Benjamin, the contributions of designers Sayre, Lamdin, Barton, Stiles, and Van Kleek, and the generosity of the Scales and Benjamin family. In 1988 the Scales Mansion was recognized by the Greensboro City Council as a Guilford County Landmark property. As recently as 2007, the Starmount Company, heir to the Benjamin family interests, donated a verdant five acre tract of land to the city of Greensboro in honor of Blanche Sternberger Benjamin.

Special thanks to J. Taylor Doggett for his private publication “Memories of the Town of Hamilton Lakes”