The Miracle on Johnson Street: How Community Support Saved a Landmark 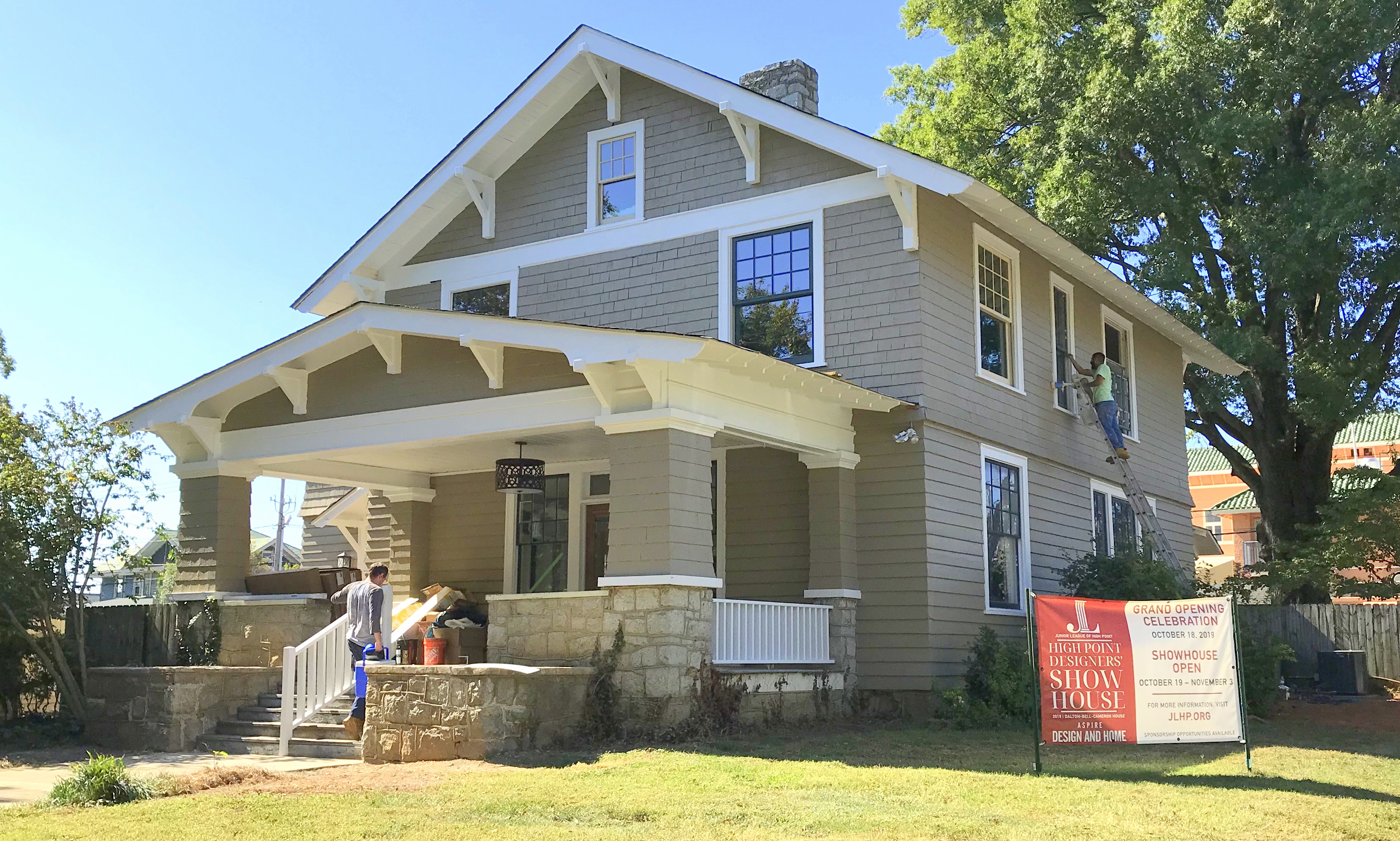 On a night in January 2012, a fire roared through the Dalton-Bell-Cameron House, a flagship residence of High Point’s Johnson Street Historic District. The house stands as the earliest documented Craftsman-style house in High Point and serves as the center piece of city’s flagship historic district.

Carter Dalton, an up-and-coming attorney and politician and his wife Mary, purchased the lot at 1013 Johnson Street in 1913. The couple began construction of their home immediately and selected a style for their home that was a revelation for many High Pointers. The Craftsman-style features of the house were not influenced by traditional East Coast styles but looked to California and the Far East. The two-story house introduced exposed rafter tails, diagonal bracing beneath wide overhanging eaves, and sawn rake boards. For the next twenty years, these Asian-inspired grew details grew highly popular in High Point as Craftsman-style houses were built across the city.

The house has some interior features that are rare to the area. A handsome masonry fireplace mantle is composed of pressed brick with fluted pilasters and “egg and dart” detail, likely purchased as an ensemble. The floors of the dining room include boxed strip floors of oak, and the staircase is an example of a “Good Morning Stair”, in which steps rise from both the kitchen and the living room to join before continuing to the second floor, allowing occupants the chance to cross paths and greet each other with the start of their day.

Later homeowners included the Harris Bell and Robert Cameron families. When the proposal for a historic district on Johnson Street was considered during the 1980s, the Dalton-Bell-Cameron House was determined to be at the heart of the best-preserved street in the city. When historian Tom Hanchett evaluated the neighborhood, he discovered that Johnson Street had lost only one significant structure. Residents proudly rallied for historic district designation to maintain that track record. The city council granted that designation to Johnson Street in 1986.

The path of preservation was not easy. Restoration on the street proved to be contentious as property owners resisted decisions made about their properties. Just a few years after the district was designated, the Dalton-Bell-Cameron House seemed destined for destruction because a Main Street business wanted to build a parking lot there. Community leaders saved the house by devising an alternative plan for a screened parking lot. Then, in 1998, a fire damaged the house, but an intrepid preservationist named Mary Powell Young DeLille completed a careful restoration and saved it from destruction.

When fire struck again in 2012, a small group of preservationists gathered at the house to meet with the owner’s representative. The outlook for the house was not good. The fire was so devastating that it compromised the structural integrity of the building. Some considered razing the house, a decision that would have left a disheartening breach on the historic street.

Preservationists worked once again to save the Dalton-Bell-Cameron House, requesting an opportunity to identify a new buyer to restore the house. Although many were intrigued by the project, none could make the numbers work. In the meantime, no stabilization was done by the owner to prevent interior water infiltration. Without a roof, the house deteriorated further and by 2017, the city considered the structure to be a nuisance and ordered that the house be repaired or demolished.

With the apparent final chapter of the Dalton-Bell-Cameron nearing, the newly revitalized High Point Preservation Society rallied to save the house by raising $34,000 in private donations over the course of five days to purchase the house. The Society then sold the property to Margaret and Rick Lewis with a preservation easement and rehabilitation agreement to restore the house. Margaret Bell Lewis was motivated for restoration – the house was her childhood home! She agreed to restore the house in partnership with the Junior League of High Point as a Designer’s Show House. Aspire Magazine signed on as the project lead and orchestrated 21 spaces by designers as diverse as High Point, New York, Toronto, Denver, and San Francisco!

The Johnson Street Miracle is the result of High Point’s “Can Do!” attitude, and its intrepid preservation community. The project is an important accomplishment for High Point in several ways. The Dalton-Bell-Cameron House remains important for its historic and architectural significance, upholding its critical role as the center piece for the 30-year-old Johnson Street Historic District. Its restoration also illustrates a renewed spirit of revitalization in the city. As a newly restored architectural landmark, the house will embody the city’s preservation of its past, its determination to recreate an “Uptown,” and its growing investment in the future.

The High Point Preservation Society has a healthy list of preservation projects under its belt. Incorporated in 1984, it was certified a nonprofit organization in 1986 and early achievements include restoration of the 1907 Southern Railway Passenger Depot and establishment of the High Point Preservation Commission to oversee our historic districts. Most recently, the HPPS collaborated with county commissioners to preserve the c.1900 Hedgecock Farmstead with 12 dependencies at Rich Fork Preserve and is supporting work to preserve the Reverend Blair House, the childhood home of jazz great John Coltrane on Underhill Street.

The High Point Preservation Society is deeply appreciative of the community support surrounding the preservation of this important house, from donors including Margaret and Rick Lewis to the Junior League of High Point, and sponsors and ticket-holders! It is with their partnership that this amazing project has been accomplished!

The Grand Opening Celebration will take place October 18th, 2019, at 6pm. Tickets for this fundraiser are $125.