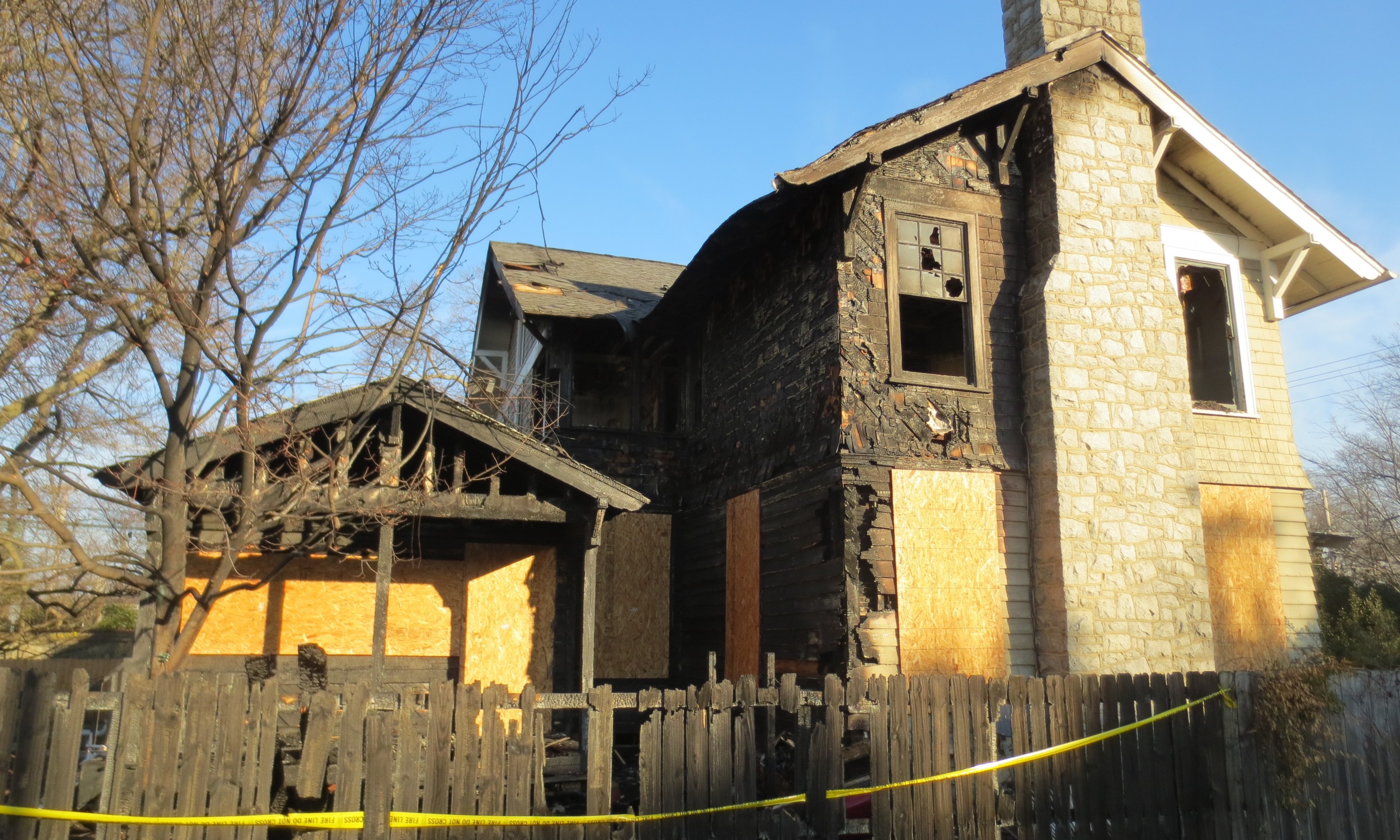 Late in the evening of January 21st, a fire mysteriously ignited near the back porch of the Mary and Carter Dalton House, a 99-year-old house in the heart of the Johnson Street Historic District in High Point. Flames quickly rose and engulfed the porch and wood shingle siding. By the time firefighters were called, the house was fully engaged in flames. Hours later, firefighters were still quenching hot spots, having extinguished the inferno just as the roof collapsed. Although a majority of the house was spared flames, the entire residence suffered major smoke and water damage, and 50% of the roof was burned away.

The Dalton House was one of the earliest Craftsman-style houses in High Point (1923 image, right). Carter Dalton was an up-and-coming attorney when he purchased the lot at 1013 Johnson Street in 1913, and the couple began construction of their home the next year. The style they chose for their home was foreign to many High Pointers, influenced not by East Coast American history but by looking to California and the Far East. The two-story house featured exposed rafter tails, diagonal bracing beneath very wide overhanging eaves and sawn rake boards. All of these Asian-inspired details became highly popular in High Point as Craftsman-style houses were built across the city for the next twenty years.

Within days after the January fire (image, right), a small group of preservationists gathered at the house to meet with Gray Angell, the son of the home’s owner Don Angel who passed away just days after the fire of a long-term illness. The prognosis for the future of the house was not good. The fire was so severe that it compromised the structural integrity of the building. So precarious was the roof that covering the open sections was highly risky due to damage to the remaining rafters. The plan at that time was to raze the house and perhaps establish a garden in its place.

This was not the first time the future of the Dalton house was in question. In the early 1990s, then-property owner Harold Davis, the proprietor of the adjacent Chapel of Flowers funeral home, sought to expand his parking capacity by tearing the vacant old house down. The community rallied and Davis compromised his plans by building parking around the house. In exchange for his compromise, he was allowed to extend his parking area several feet closer to Johnson Street than he would otherwise be allowed, and he placed a preservation easement on the property that would prevent future owners from tearing the house down. The deal was a major victory for Johnson Street, as the Dalton House held a prominent corner location in the heart of the district.

A few years later and still unoccupied, the house caught fire. The blaze damaged a downstairs room and exterior details before being extinguished by firefighters. In response to the fire, Harold Davis sold the house in 1997 to the intrepid Mary Powell Young DeLille who set about restoring the house (2005 image, right) by upgrading the kitchen and bathrooms, refinishing details and updating mechanical systems. Freshly painted and refurbished, the Dalton House took its place among the fine century-old homes that line Johnson Street.

In 2008, the house was purchased by Don Angell, a preservationist and investor from Winston-Salem who had acquired Harold Davis’s old building after it had been converted to use as the J. H. Adams Inn. Acquisition of the Dalton House was logical for Angell to compliment his adjacent property holdings and allowed for overflow accommodation from the inn.

The January 2013 fire (image, left) once again placed the future of the Dalton House in question. Although it had been rescued from destruction for use as a parking lot, and restored from an earlier fire, the most recent blaze was perhaps the final blow that would tear a vacant space into the midst of High Point’s flagship historic district and visually cleave the linear neighborhood into two halves.

Throughout the long wet summer that saw record rainfall amounts seep through the open roof, members of the preservation community quietly worked to assure the future of the home. Residents of the neighborhood held a particular interest in the fate of the property because it held such a prominent location for the district. Its loss would be felt aesthetically as well as economically. As the summer cooled to fall, the future of the house began to brighten as potential owners Murri and Matthew Everhart negotiated with Gray and Don Angell’s estate to devise a course of action that would result in the preservation of the house. Last month, an offer to acquire the house for restoration was accepted by the estate with restrictions by the Angell family that the home be preserved and maintained as a single family home. The agreement allows for further analysis by an architect and contractor, and i If all goes well, a closing on the property could follow in January.

This project is important for High Point in many ways. Not only is the property important for its historical and architectural significance, and not only does it hold a critical role as a keystone for the 25-year-old Johnson Street Historic District, but the restoration of the home illustrates the enthusiasm both families have for the city. This is particularly important for older central High Point, where real estate values have flagged and re-investment in properties has slowed over the past 15 years. The fact that the Angell and Everhart families see opportunity in this house speaks well to strength of the Johnson Street Historic District and reinvestment momentum in High Point’s “Uptown”.

The Everharts will continue refining their plans for the restoration of the Dalton House, and a closing might occur in the next few months. In the meantime, historic preservation may find a chance to contribute to broader revitalization plans in this part of High Point.