The Magnolia House: A Pivotal Point Of Greensboro History 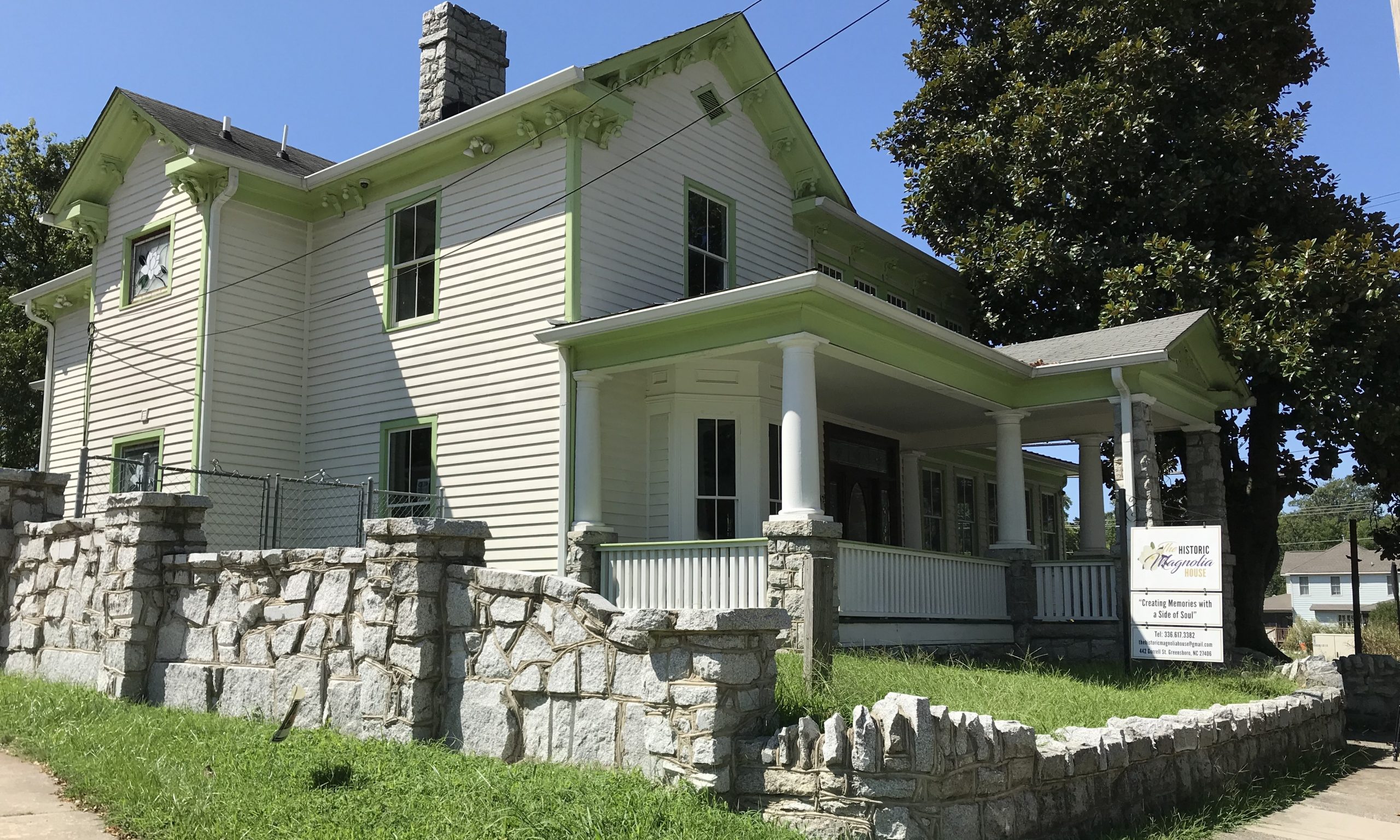 The landmark house on Gorrell Street is most notable today as the Magnolia House Motel, a Green Book-era accommodation with deep roots in Greensboro’s Black community. Beyond its legendary hospitality, the Magnolia House has been witness to Civil Rights history, political history, and a growing celebration of Black history.

The house itself was built in 1889 and boasts a narrative that pre-dates the renowned motel. It was first occupied by white homeowners Annie and John W. Reed. Reed was a grocer of bulk meats, lard, multiple brands of flour. The house was built by contractor John Donnell Jr. and early insurance maps indicate it featured a three-story tower above the front door. Very few features survive from this earliest period of construction. The couple purchased the house in October 1889 for $1300. Reed’s grocery store opened a month later.

Unfortunately, Reed’s grocery was severely damaged by water used to extinguish a large South Elm Street fire in March 1890. Most of Reed’s stock of flour was ruined and he held no insurance on his business. Two months later, in May 1890, Annie Reed died of consumption, but the property remained in her extended family by will to her son by first marriage, Thomas Tiddy. Her second husband, John, retained a life estate to the property. Over the next 20 years, the house was rented by the Tiddy family to Annie’s parents, Dr. Calvin Graves and his wife Caroline, as well as to Captain Daniel Dulany DeButts and wife Francis “Fannie” Sidnor DeButts. Captain DeButts was a businessman who began a career in Greensboro as a flour salesman.

In 1914, the house was sold to Nina and John Plott, a road contractor. The Plotts raised their three children – Mildred, Shuford, and Virgie – in the house. Though John died in 1938, Nina retained the house until 1949. It is likely the Plotts made major changes to their home shortly after they acquired the property by expanding the house’s floor plan and updating architectural features [1921 image, right]. Mount Airy Granite stonework was added, attributed to Greensboro stonemason Andrew Leopold Schlosser. Most of the existing details of this house date from this period of construction. It was during the Plott’s ownership that the house was badly damaged in the 1936 Greensboro Tornado. During the 1930s and 1940s, the Plotts rented up to six rooms, both furnished and unfurnished, for income.

Louie and Arthur Gist were the next owners of the house. Arthur Taswell Gist was born in 1888 in Union, South Carolina to Lucy and Aaron Gist. He was a veteran of World War I and was trained as a brick mason. Louie was also a South Carolina native, born in 1908. She had two years of college education and earned income as a seamstress. The African American couple raised their family in Spartanburg, SC, but their eldest son attended NC A&T in the 1940s. By 1950, the family lived in the Gorrell Street house, also listed as the Magnolia House tourist home in the Greensboro city directory.

During this era, accommodations for Black citizens were selected carefully. Mainstream hotels across the country often denied service to Black travelers. To assist them in their journeys, customers were guided by a publication known as “The Negro Travelers’ Green Book: The Guide to Travel and Vacations.”

In 1951, a new accommodation opened near the Magnolia House. Named the Plaza Manor Hotel, the facility located at 511 Martin Street was advertised as having hot and cold water, steam heat, and meals served. With nightly rates ranging from $2.00 for singles and $4.00 for double occupancy, this hotel targeted a middle-income market.

In contrast, the Magnolia House catered to upper-income Black travelers. It was an immediate sensation. The Pittsburgh Courier reported in September 1951, “Mrs. Arthur Gist’s [image, right] bridal luncheon at Magnolia House was superb…succulent was the word for the barbeque dinner…” The Magnolia House first appeared in the Green Book guide in 1955 and took a place at the top of the city’s list for Black clientele.

In 1952, columnist Vivian Rowell from Tuskegee, Alabama described a road trip from Raleigh to West Virginia. She narrated her trip, “But I finally got away just in time to drive to Greensboro before dark, where I spent the night at the Magnolia House, sort of a private hotel home. Mr. and Mrs. Louis Gist, formerly of Spartanburg and who know my good friend, Mrs. C. H. Franklin, own this house.”

Throughout the 1950s and 1960s, Magnolia House was a distinguished and upscale accommodation for members of the entertainment industry and other celebrities. Historians have documented memories of James Brown playing with neighborhood children, Joe Tex signing autographs for fans on the front porch, and sightings of entertainers such as James Baldwin, Ray Charles, Sam Cooke, Jackie Robinson, and Ike and Tina Turner. Greensboro minister Donald Trapp remembered “It had Oriental carpets on the floor and a chandelier. It stayed full all the time, especially on weekends.”

The house hosted numerous special events. In 1957, the house was the site of Black employees of Piedmont Natural Gas for their annual Christmas party and presentation of service awards. In 1960 it accommodated a reunion of veterans of World War I, where all such veterans were welcome. In 1968, the house served as the meeting location for the executive committee of the Democrat Club of Guilford County. The elder Gists took a role as political reformers in the city.

The tourist home also served as a touchstone to Civil Rights efforts, exemplified in May 1958 when the house was the site of the organizational meeting of the Guilford County Negro Democratic Club. Arthur Gist was elected treasurer. The club sought to coordinate with the Democratic Party and to meet Democratic candidates for public office during a time of Black empowerment in Greensboro. In July 1962, the house was a stop on the Freedom Drive in the south by the Congress of Racial Equality (CORE) to “end segregation at roadside restaurants”. Principal targets of desegregation were the Howard Johnson and Holiday Inn chains. The Magnolia House served as a training site for nonviolent protests, building on the civic engagement accomplished during the Woolworth Sit In demonstrations at area lunch counters of 1960.

Upon her return to Greensboro, a June 1957 article in The Greensboro Record described Dr. Gist’s challenge of segregation and racist’s reactions, stating “Members of the family of Dr. Ann Gist, Negro woman of 442 Gorrell St., who was with a companion was denied admission Tuesday afternoon to the Lindley Park Swimming Pool, stated yesterday afternoon that they have received several threats of violence by telephone.” Like her parents, Dr. Gist took a role as a reformer, but openly challenged rules that were biased against her Civil Rights.

By 1964, Arthur and Louie moved to a smaller cottage at 605 Bragg Street two blocks south. As late as 1968, the Magnolia House was listed as a Tourists’ Home in the Greensboro city directory. Arthur Gist died in the Veterans Administration hospital in Durham in 1966. Louie died in 1986. Within these years, the facility closed as a tourist home. Representative Herman C. Gist lived in the house until his death in 1994. Though empty and vulnerable to trespassers, the house has been recognized as an important and contributing property within the South Greensboro National Register Historic District since 1991.

The house was acquired by Sam Pass in 1996 from Grace Gist, Herman’s widow. Sam Pass learned of the history of the house and developed a plan for a living history museum. Guests would not just examine the house as a museum, but could experience the landmark through learning, staying overnight, and dining…just as visitors had during the 1950s and 1960s. Today, the house is operated in tandem with his daughter, Natalie Pass-Miller, who continues to restore the site for continued use as an historic center for Greensboro.

The Historic Magnolia House is operated as a living museum with a variety of engaging events and programs. It is currently (January 2021) raising funds for the restoration of its iconic sign! To learn more about this site and its history, visit www.thehistoricmagnoliahouse.org.

In 2021, the Historic Magnolia House was featured in Preservation Greensboro’s 11th Annual Tour of Historic Homes & Gardens in Southside.