Old World Cottage In Fisher Park Was Built in 1917 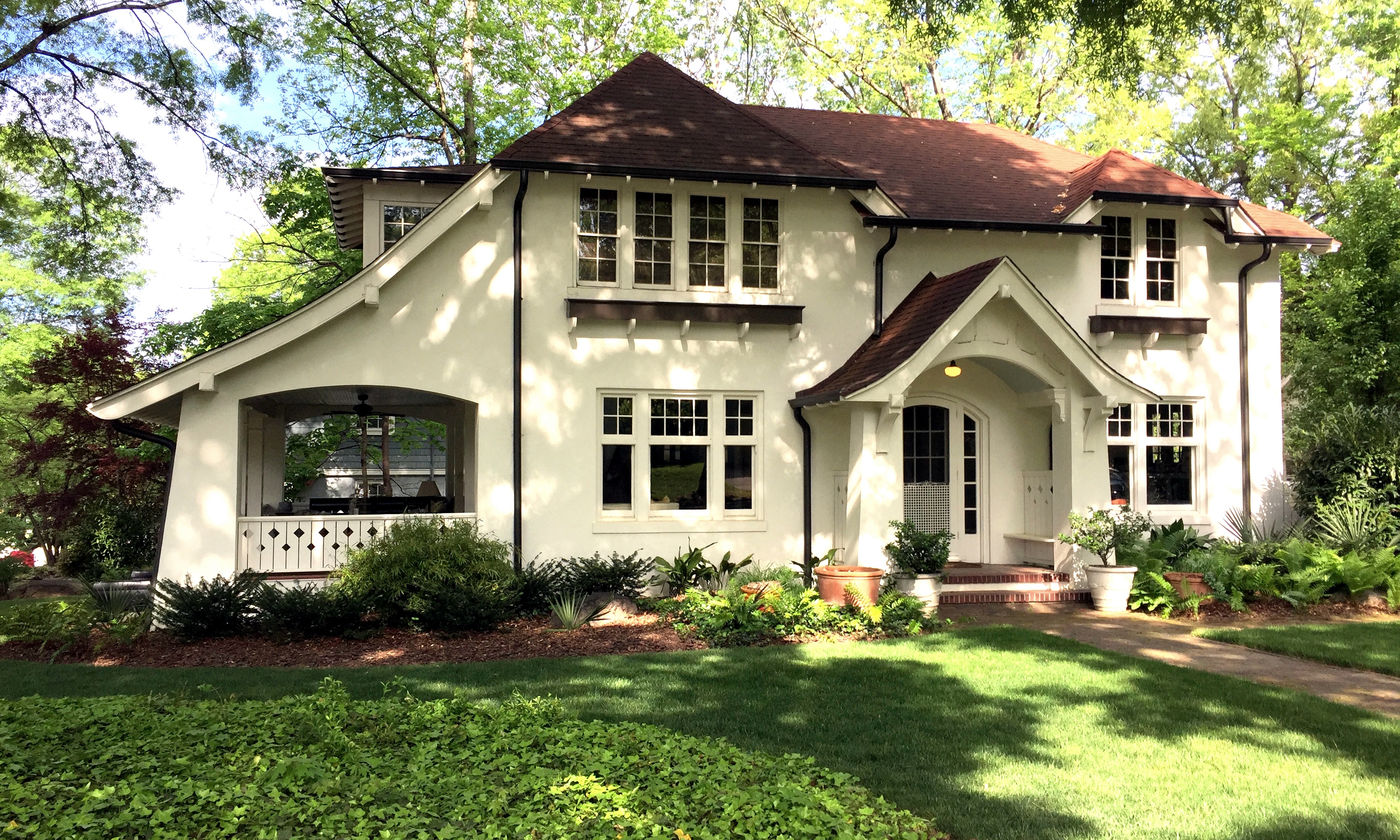 Whether it’s the “Three Bears’ House” or “Cinderella’s House,” people who know the Thompson House at 1101 Virginia Street are enchanted by its fanciful Old World style. It stands today as a well-preserved example of Period Revival architecture in the neighborhood.

In October 1917, the Greensboro Daily News reported, “Mr. and Mrs. R.L. Thompson have bought one of the attractive homes on West Bessemer avenue from the J.E. Latham company and expect to move into it within the next few days.” The Germanic Revival cottage was originally addressed as 300 West Bessemer Avenue when Anne and R. L. Thompson purchased the house. Bessemer, Virginia, and Parkway were streets associated with Fisher Park, Extended, a new phase of Fisher Park developed by Latham in 1916.

The house was likely designed by Raleigh James Hughes. An article in the Greensboro Daily News in February 1916 announced “that contract had just been let for the erection of six handsome dwellings in Fisher Park, Extended, three on Bessemer Avenue and three on Virginia Street.” Considering that this house was sold in October the next year, it is possible the house is one of the six commissions Hughes received from Latham.

The house is considered “Period Revival” because it recalls an earlier architectural tradition. Many houses of the 1910s and 1920s fall in the Period Revival category. The clipped “Jerkin Head” gables, flower boxes, sawn balusters, and kick eaves of the front porch give the Thompson House a rare “Germanic Cottage” appearance. The walls are terra cotta tile parged with stucco. Interior appointments are not as thematic as the exterior: plaster walls, a charming staircase with multiple landings, and simple moldings. Originally, the house featured a flat tile roof and walls covered in ivy. Otherwise, the appearance of the house is much unchanged.

Robert and Anne were originally from Raleigh. They married in 1899 and had a son, Robert Jr., and a daughter, Laura. When they lived at 300 West Bessemer, Robert was part owner of Thompson & Mullen Cotton Brokers. 1916 was a boom year for cotton prices due to short supplies and the Great War in Europe. The Thompsons apparently benefitted from the boom, moving into their new house in 1917. At the time, their son attended Woodbury Forest in Virginia, and daughter Laura attended Fassifern School in Hendersonville. The family moved to New York City in 1919, and the Matheson-Wills Real Estate Company advertised, “FOR SALE. The R.L. Thompson home on West Bessemer avenue. Seven rooms and sleeping porch. Steam heat, hardwood floors, vacuum cleaning plant, corner lot 90×150. In perfect condition, possession now.”

The house was purchased by Mabel and Grover Cox for $13,500. Cox was the secretary and treasurer for the Gate City Motor Company. They had one son, Grover Jr. The house was income property through the Great Depression. The next long-term owner-occupants were Catherine and Robert Clegg who moved into the house in 1967, and remained until 2008. The house caught the eye of Betsy Phillips, a native of High Point who purchased and restored numerous properties in Greensboro. She retained original details and returned missing architectural features to the house. On the stairs to the basement, Betsy preserved a heart with carved initials – perhaps a love note from the Cleggs? By 2015, the house was home to David Yelverton, its current occupant. The house is included in the National Register Historic District and the local district.