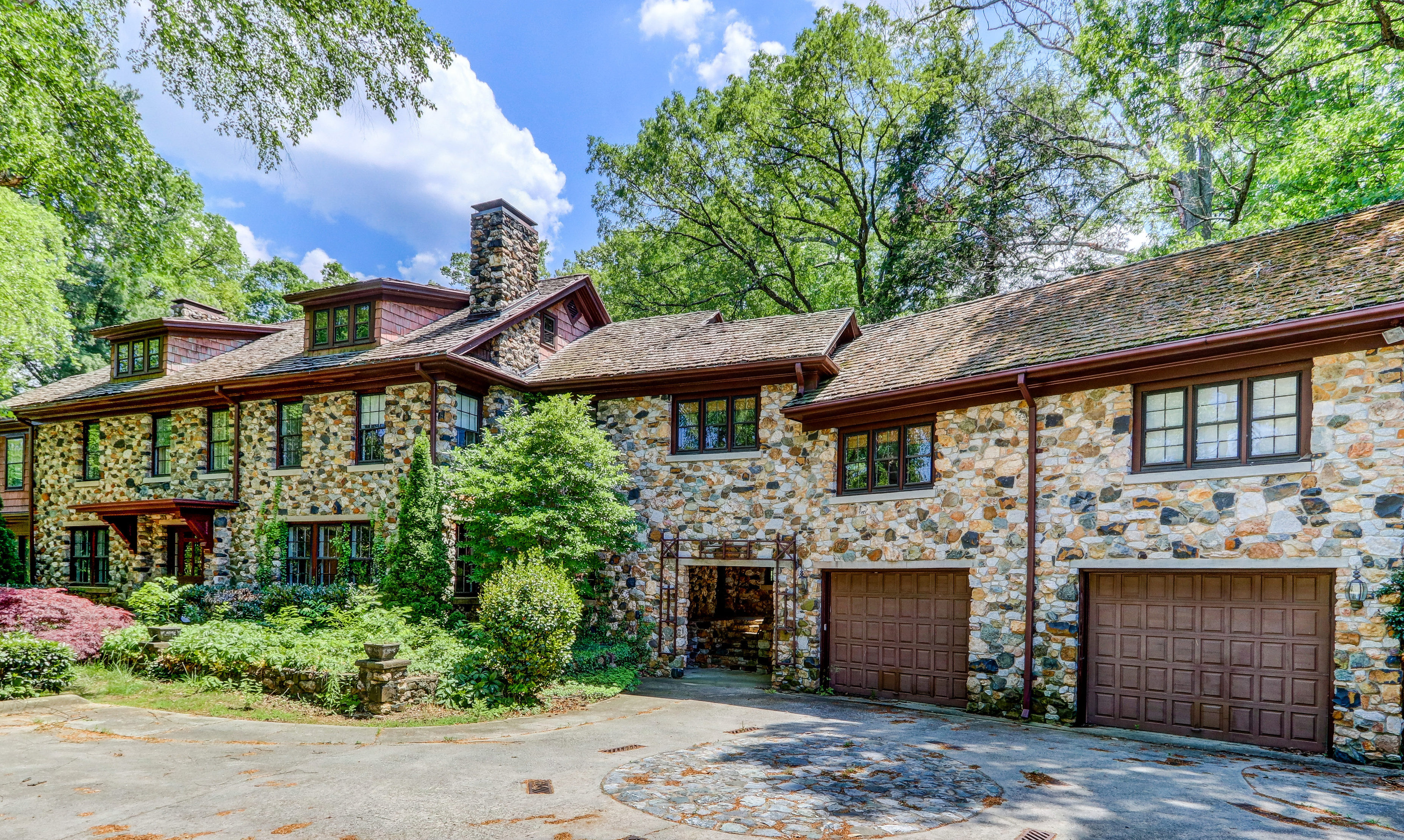 One hundred years ago, it was a center of Greensboro’s social scene, but today the rustic Edgewood Estate sits empty after a period of neglect. It stands ready for a new owner to restore the formerly rural retreat to its next chapter in history.

Located in the middle of a suburban block at 111 Arden Place, and bounded by West Market Street, Sylvan Road, and Mayflower Drive, the early history of Edgewood remains largely a mystery. The house predates the adjacent College Park and Sunset Hills neighborhoods, and is thought to have been completed around 1912.

The rambling two-and-a-half story Colonial Revival-style house features a striking multi-colored stone façade that includes attached and detached garages with servant’s quarters. The landscaped estate is part of a family of comparable houses in Greensboro that reflect interest in establishing rural havens away from the city center.

Judge Thomas Jefferson Shaw, the builder of the eclectic house, was a barrister and jurist of statewide repute. Shaw was born in Montgomery County on 5 March 1861, the fourth of Rebecca Kelley and Peter Cornelius Shaw’s seven children. He was educated under the tutelage of his father before entering the University of North Carolina where he prepared for enrollment in the Dick and Dillard Law School in Greensboro 1883. The school was considered a leading institution for legal education in North Carolina during its active years between 1878 until 1893.

Shaw was admitted to the bar in the fall term of 1884, and he began practicing law in his hometown of Troy in Montgomery County. The next year he moved to the Moore County seat of Carthage where he managed legal affairs for the next four years. During his time in Carthage he met Mary Florence Woollen (1869-1935). Mary was native of White Store crossroads community in Anson County and she taught music in Carthage. The couple married in 1887.

Early in his career, Shaw associated with established practitioners W. C. Douglass Esq, as well as Alfred Moore Scales, and Charles A. Hines. Those later two relationships likely led to the couple moving their home to Greensboro in 1893. They resided in a house at 122 Smith Street and joined the First Presbyterian Church. He was elected an elder int he church and served as city alderman for several years. In 1904, the couple had their only child, Thomas Jr.

Shaw was elected to the Superior court bench in 1899. During his eight-year term, it was said that “Judge Shaw is pre-eminently one of the best judges on the Superior court bench. A man of smooth, even temperament, a judge of human nature, able wise, upright, strict in the enforcement of law and order, but merciful and kind-hearted.”

In June 1906, Judge Shaw’s judicial service ended when he was not re-nominated by the Democratic party. A newspaper editorialized “the only fault we have to find with his judicial conduct is the fault found by many others, that Judge Shaw has often been unduly severe in the matter of imposing sentences in criminal cases.” He returned to private practice with notary Charles Hines under the incorporated name Shaw and Hines. In 1907, the Shaws purchased a modest house located on Church Street across from the First Presbyterian Church.

The Shaws sold their Church Street house In January 1911, and in November 1911 Mary and Judge Shaw purchased eight acres of land in western Greensboro for $2200. Considering substantial homes of the period often cost in excess of $2000, this price indicates no structure stood on the land at the time of purchase. The heavily wooded property was located south of the Benbow farm and east of land held by Col. James T. Morehead. Both tracts would be acquired by developer A. K. Moore and developed as the Sunset Hills subdivision in 1922. Edgewood was likely built during the winter and spring of 1912.

Its design is attributed to Greensboro architect J. H. Hopkins. The house shares several details with Hopkins only other surviving documented residence, the Leak House at 909 North Elm Street. Aside from Colonial Revival symmetry and massing, other shared features include beamed ceilings, use of wainscoting in the dining room, a distinctive stair newel of pickets arranged in a circle, and generous sleeping porches. Other interesting features of the house include a double entry air-lock, old growth Southern Yellow Pine flooring, corner fireplaces in second floor bedrooms, and a gracious full height attic. Hopkins was most active in Greensboro from 1900 until his death in 1923.

Perhaps the most unique aspect of the house are its exterior stone walls, a blend of irregular-cut Mount Airy Granite, Winnsboro Blue Granite, and local Milk Quartz. Residential stone construction was relatively new to Greensboro – the Latham-Baker House of 1909-1910 is an early example – with comparable houses built in the Fisher Park and Irving Park neighborhoods in the 1910s. The stonemason for Edgewood is undocumented, but Andrew Leopold Schlosser and O. D. Boycott were both stone contractors in Greensboro at the time. The stone is roughly dimensioned with rakes joints and features cast-concrete window and door lintels.

The Greensboro Record newspaper made the first public reference of the house in July 1912, reporting that “Miss Alma Henley will entertain a number of friends this evening at “Edgewood,” the country home of her uncle, former Judge Thos. J. Shaw.”

County homes were long popular around Greensboro, where professional families sought a rural respite from the commotion and consternations of the city. With improved roads from the city, families with disposable income and leisure time commissioned modern homes in rural locations. Contemporaries of Judge Shaw including Edgar Broadhurst, Robert Douglas, Alfred Moore Scales, and Aubrey Brooks all erected country houses in Fisher Park and Irving Park in 1912. City directories indicate Edgewood was initially accessed by way of Spring Garden Street, and later a driveway was created to access the terminus of West Market Street near Josephine Boyd Street.

Shaw’s career received a boost in 1913 when he was appointed by Governor Locke Craig to serve as judiciary to the 12th District Superior Court – a position in which he remained until he suffered a heart attack while holding court at Graham in 1936. The 1920s saw a great deal of change to the landscape surrounding Edgewood as the Sunset Hills neighborhood was laid out in 1922, and the College Park subdivision was platted in 1924. The Shaws subdivided the remainder of their estate in 1925, creating Arden Place. Mary and Judge Shaw sold Edgewood in 1929 to Richmond Virginia trustees David Harris and Tristram Hyde. Mary died in 1935.

Upon Shaw’s death in 1937, North Carolina Governor Hoey remarked “in the death of Judge Shaw, the state lost one of the wisest and ablest judges. In his long period of service on the Superior court bench, he was able to lift the enforcement of law and the administration of justice to a very high level.”

The property saw a rapid succession of sales after Judge Shaw’s death. C. H. Gingher sold the property to G. Simpson Boren in 1937, who sold it to City Manager H. A. Yancey in 1943. Lucy and Charles MackIntosh acquired the house in 1946 and sold it to Virginia and Marvin Legare in 1964 (image, right). In turn, the Legare’s sold the house to Susan and Judge Frank Bullock in 1974. More recent owners include Carol and Robert Lock (1986-1992), Barbara and Michael Bruce (1992-1999), and Orren and Harry Falk (1999-2017). The property is currently owned by BB&T bank, and is on the market for purchase.

Previous property owners never sought recognition of Edgewood to the National Register of Historic Places nor Guilford Landmark status, despite designation of the Sunset Hills neighborhood just west and north of the house in 2013. Designation would do much to secure the future of the landmark, which was added to Preservation Greensboro Treasured Places Watch List in 2017.

Update! This property was purchased in July 2018 by Kristi and David Ceiner. They look forward to restoring the historic house and grounds and living there with their family.