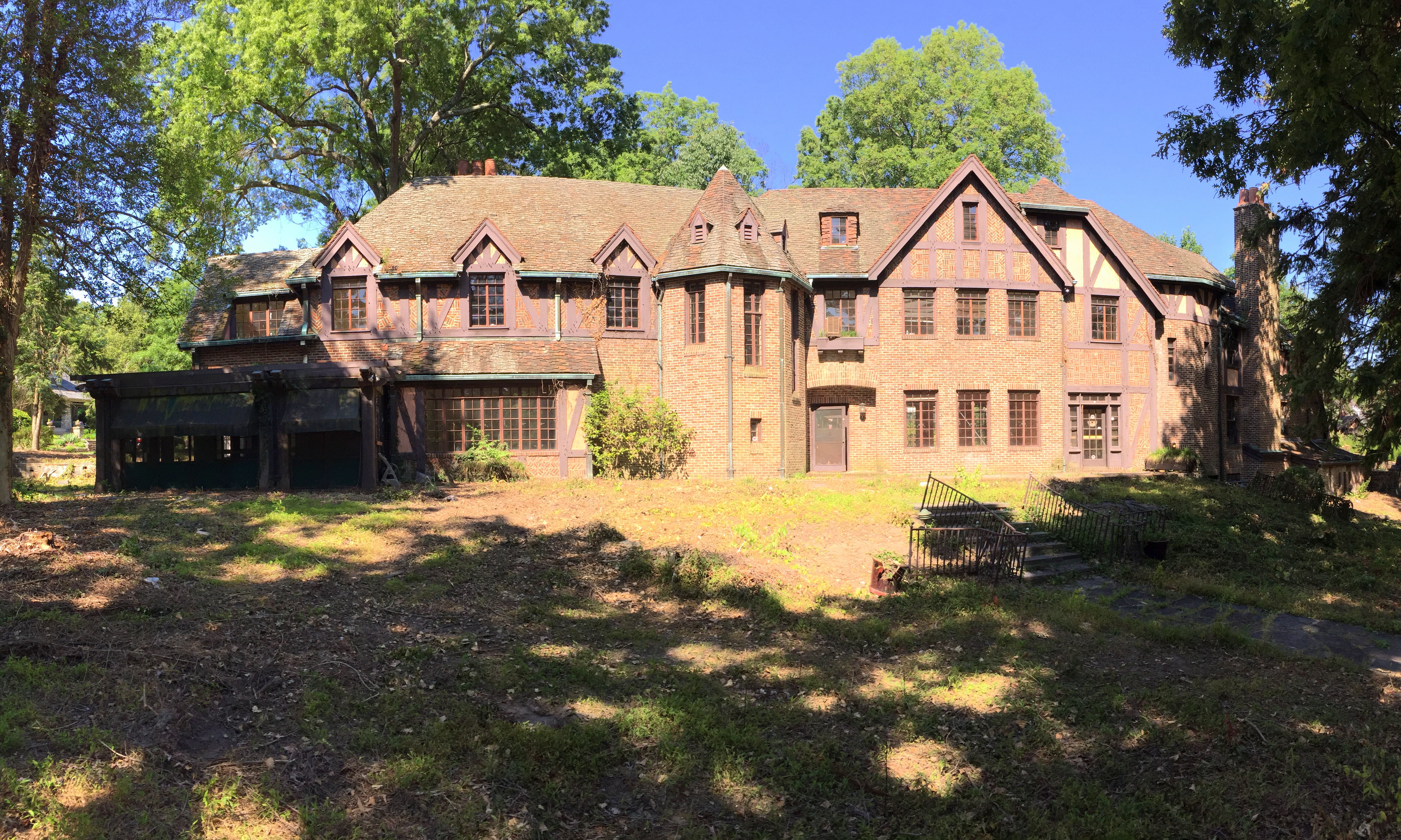 Hillside sits at the head of the table that is Fisher Park at 301 Fisher Park Circle. Begun in 1928 and completed in the spring of 1929, the sprawling residence evokes a rambling English Tudor manor. The house is among a group of Greensboro houses that express the craftsmanship, design talent, and vast wealth that was assembled in Guilford County in the 1920s — recognized as having statewide significance in 2015.

Architect Charles C. Hartmann designed this home for his most important client, Julian Price. By the time of this commission, Hartmann was at the peak of his professional career. He was called upon to design courthouses, banks, hospitals, and college halls across the state. Price is most remembered as chairman of the board of the Jefferson Standard Life Insurance Company and a philanthropist.

The two men were connected by architecture. In 1919, Hartmann arrived in Greensboro under the auspices of W.L. Stoddard, Architects of New York City to design the O. Henry Hotel for the Foor and Robinson chain.  Price offered Hartmann the job of designing a major project, the corporate office tower for Jefferson Standard, if he’d move to Greensboro and open a practice. Hartmann accepted and spent the rest of his life in Greensboro, designing notable buildings throughout North Carolina.

Price was born near Richmond, Virginia. He found early employment with the railroad, which led to service as a telegraph operator and dispatcher for the Southern Railway. This position took him to Durham in 1895 and shortly thereafter to Greensboro. In Greensboro, Price accepted a position with the American Tobacco Company and in 1905 went to Greensboro Life Insurance Company. Greensboro Life joined with Jefferson Standard in 1912, and Price was elected vice-president and agency manager. He was promoted to president of the company in 1919 and served in that capacity for twenty-seven years until 1946.

Price also picked Hartmann to design his estate. Located on a gentle rise overlooking the western lobe of Fisher Park, the sprawling residence is an example of Period Revival architecture. The linear Tudor house is broken into three distinct sections, perhaps to suggest an ancient residence that grew and expanded with the family’s fortunes. The central façade features herringbone brick and half-timbered “Jerkin Head” gable, a segmental arched entryway, casement windows, and a stair tower. The southern portion of the house features a hipped roof, more patterned brickwork, casement windows, and wall-dormers. The northern wing is distinguished by half-timbering with rough plaster, double-hung windows, and a massive brick chimney with articulated flues and clay pots. The eastern façade faces Fisher Park with a terrace. The western façade addresses a driveway with a porte-cochere and a motor court. The landscape of the estate is united by stone retaining walls, serpentine flagstone walkways, and mature trees, some original to the property such as the central Chinese Fir.

Price was married to his wife, Ethel, for forty-six years. She died in 1943, and Julian died in 1946 due to injuries sustained in an automobile accident near Blowing Rock. Their son, Ralph, and his first wife, Martha, remained in the family home until he donated the property to the First Presbyterian Church in 1959. The church used the house as its Manse, and members recall visiting Dr. John A. Redhead Jr., the longtime pastor, in the house during the 1950s and 1960s.

Dr. Joseph B. Mullin served as pastor beginning in 1971. He and his family occupied the house until 1973. The house stood empty until an offer to purchase was accepted from Sandra and Glynn Cowart in 1975. It sold for $125,000.

Many in Greensboro today remember the house when it was opened by the Cowarts as a Designer Show House in 1979. Members of the Carolinas Chapter of the American Society of Interior Designers chose among 31 rooms. James Wesley Essary of Charlotte designed the living room with a flame pattern upholstery “in bittersweet, deep blue, parchment, and yellow.” Coy Carpenter designed the dining room with “orangey hues full-strength in walls and cotton draperies” and a “persimmon and white custom designed rug.” Mary Elam connected these rooms with the tower-stair foyer with “warm shades.” Proceeds benefitted the Greensboro Council of Garden Clubs, raising $30,000 and attracting 8,000 to 10,000 visitors.

Sandra remained in the home after a divorce, and she ran her highly successful design business from the house. In spite of designation of the property as a Guilford County Landmark in 1983, residents noticed a general decline of the Hillside property over the past decade. The estate was vulnerable to being destroyed for redevelopment, but Preservation Greensboro worked with the North Carolina State Historic Preservation Office and Sandra to see the house gain statewide significance in order to prevent demolition. As the condition of the house deteriorated and finances grew increasing restricted, the mortgage holder auctioned the property in 2016.

The purchasers were Eric and Michael Fuko-Rizzo, who plan a complete restoration of the property. They are working with Fisher Park landscape architect Chip Callaway to rejuvenate the grounds, which were taken over by invasive plants such as bamboo, ivy, poison ivy, and honeysuckle. They are coordinating their work with Preservation Greensboro to open Hillside as a Designer Show House in 2018.

Hillside is today an active construction site. Access is limited to the most impressive public rooms on the ground floor during the Tour of Historic Homes and Gardens.

In 2017, vintage homes such as Hillside in the Fisher Park neighborhood opened their doors to ticketholders during Preservation Greensboro Incorporated’s seventh annual Tour of Historic Homes & Gardens.