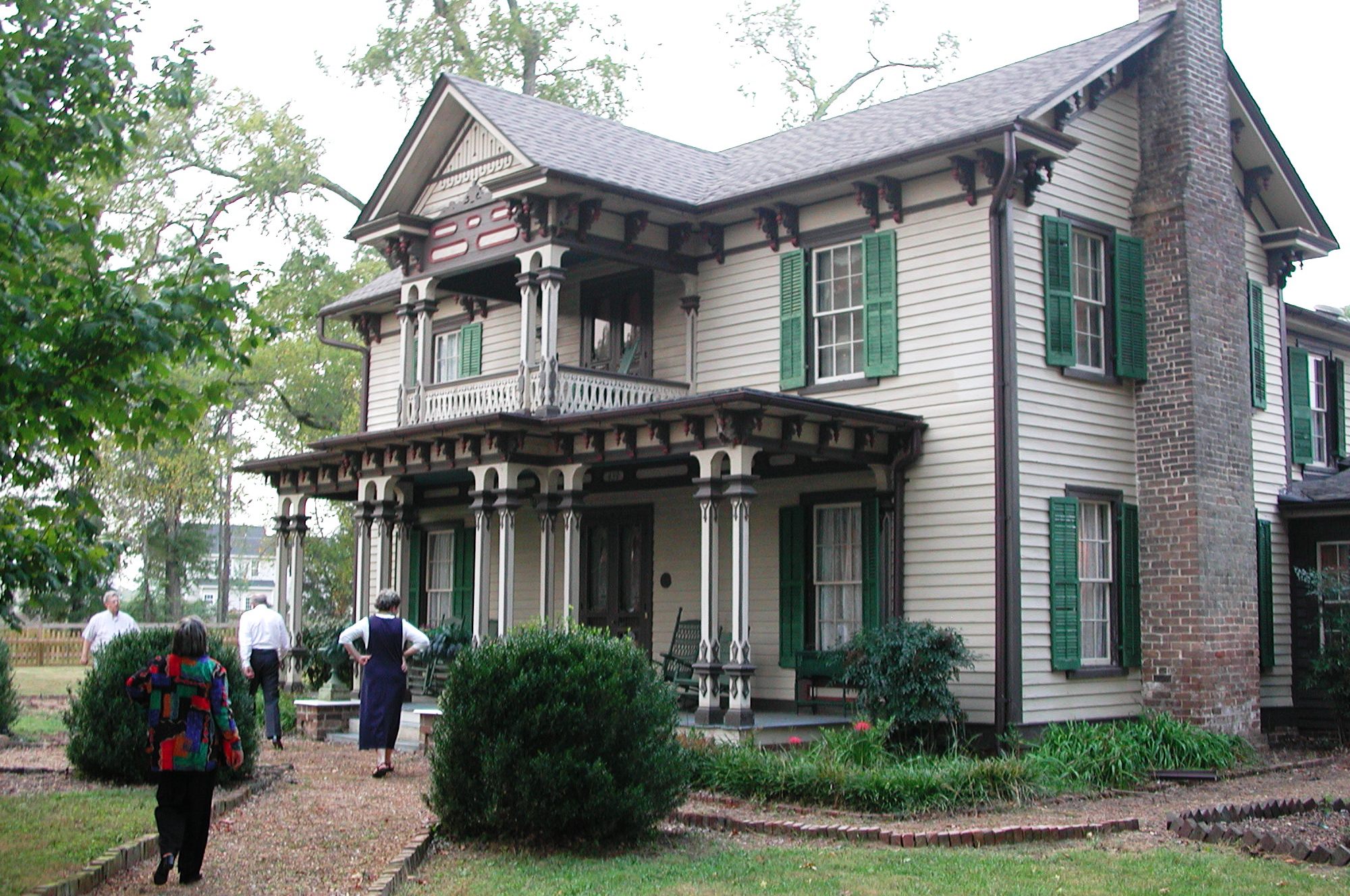 The Daniel Paisley and Cledora Foust House is a benchmark for architecture and design in Guilford County during the Victorian Period. It illustrates the holdings of a successful Guilford County farmer who cultivated 3,000-acres during the Reconstruction Era near Whitsett.

The Foust family arrived in the Piedmont of North Carolina in the eighteenth century as part of a larger migration to the region by German settlers. By the early nineteenth century, the family of Daniel Foust, (1788-1882) and Mary Clapp (1790-1834)was established in eastern Guilford County in a sizeable home several miles north of the Brick Church, the center of a German Reformed community. The church was known as Der Klapp Kirche until c. 1813 when the current brick building was constructed.

Daniel Paisley Foust was born 25 October 1827, the eighth son and tenth child of Daniel and Mary. He was raised on the family plantation that was among the most prosperous in the neighborhood. On 26 April 1855 he married Cleodora Teresa “Dokie” Clapp, a daughter of John George “Robertson George” Clapp and Elizabeth Robertson. The couple commenced construction of a two-story, center-hall plan home at an intersection alongside the old stage road connecting Raleigh and Hillsborough to Greensboro. The four room house was substantial for a newlywed couple, and illustrated that they came from families of wealth.

In the years before the War, Foust held twenty-five enslaved people and operated a general store and post office from the crossroads that he named “Allemance Post Office”. Over time, he accrued additional investments included the G. S. Mill and Company on Big Alamance Creek, several rental houses in Greensboro, and stock in the North Carolina Railroad.

His role in the community grew in importance with age.  In 1868, he donated land for the Springwood Presbyterian Church, a congregation born from an unauthorized Presbyterian pastor ministering during the hardships of the Civil War at Brick Church. He gave $125.00 to the building of Springwood Church in 1873, and Foust was named as a ruling elder. Upon his death, his estate was directed to benefit the church for construction of a manse and improvements to the cemetery. He served as a Justice of the Peace, and according to local tradition he married many freed African Americans.

In addition to his support of religious and commercial enterprises in and around the Allemance crossroads community, Foust and his siblings donated land for the Fairview Academy in 1884. By 1888 the school was renamed the Whitsett Institute for Guilford County native William Thornton Whitsett.

At its height, his plantation included 1,000 acres of Meckenburg and Iredell loams; an upland soil deemed suitable for corn, oats, and hay. The location of the farm proved quite fortuitous with the arrival of the North Carolina Railroad in 1856. The rail line allowed Foust to service a greatly expanded statewide market, thus securing a robust profit for his goods.  By 1870, the agricultural schedule reported Foust producing wheat, corn, oats, potatoes (Irish and Sweet) and hay. Foust also raised livestock; specifically horses, mules, cattle and pigs. By the time of the 1880 census, Foust added a tannery, a grist mill, sawmills, and two orchards of apple and pear trees to his holdings.

Sometime between 1867 and 1881, the Fousts constructed a grand two-story, three-bay addition to their simple Greek Revival-style residence of 1856. The new wing fronted the stage road and was designed in the fashionable Italianate style, sporting a two-level porch, sawn trim and bracketed eaves. Notably, the home featured marble mantels and double-leaf front doors with etched and cut-glass panes with representations of urns and hanging baskets.

When Foust died on July 20, 1911, his estate inventory listed 1,384 acres in Rock Creek Township as well as several rental houses in nearby Greensboro. Foust had accumulated bank and North Carolina railroad stock. The total estimated worth of his estate was $77,111.36. His widow, Cleodora survived until her death in 1919, at which time her property passed to her great-niece, Margaret Greeson before being granted to the Orange Presbytery (Springwood Presbyterian Church).

The grand Foust House became rental property by  1921 when the Orange Presbytery (now  Salem Presbytery) inherited the property. In November 1944, the church trustees sold the house and property to T. L. and Clara Hooper and on that same day, the Hoopers then sold the property to F. G. and Robbie Screen. Robbie Gould Screen became the sole owner upon the death of her husband. Mrs. Screen was a colorful character in the community, and she thoughtfully left the property to Guilford County when she died in September 1988 to fund construction of a county-owned drug and alcohol rehabilitation center. In May 1989, the home was severely damaged by a severe thunderstorm that blew ancient maple trees on to the home that threatened its future. Preservation Greensboro acquired the property from the county through its revolving fund, and sold the historic property to Jerry S. Nix in November 1991 with a preservation easement. The easement ensures that the property will remain well-maintained and historic features will be maintained. Nix orchestrated a transformative restoration on the house that was largely complete by 1995.

The house was designated as a Guilford County Landmark property 31 January 1985, and was listed to the National Register of Historic Places in 2004.