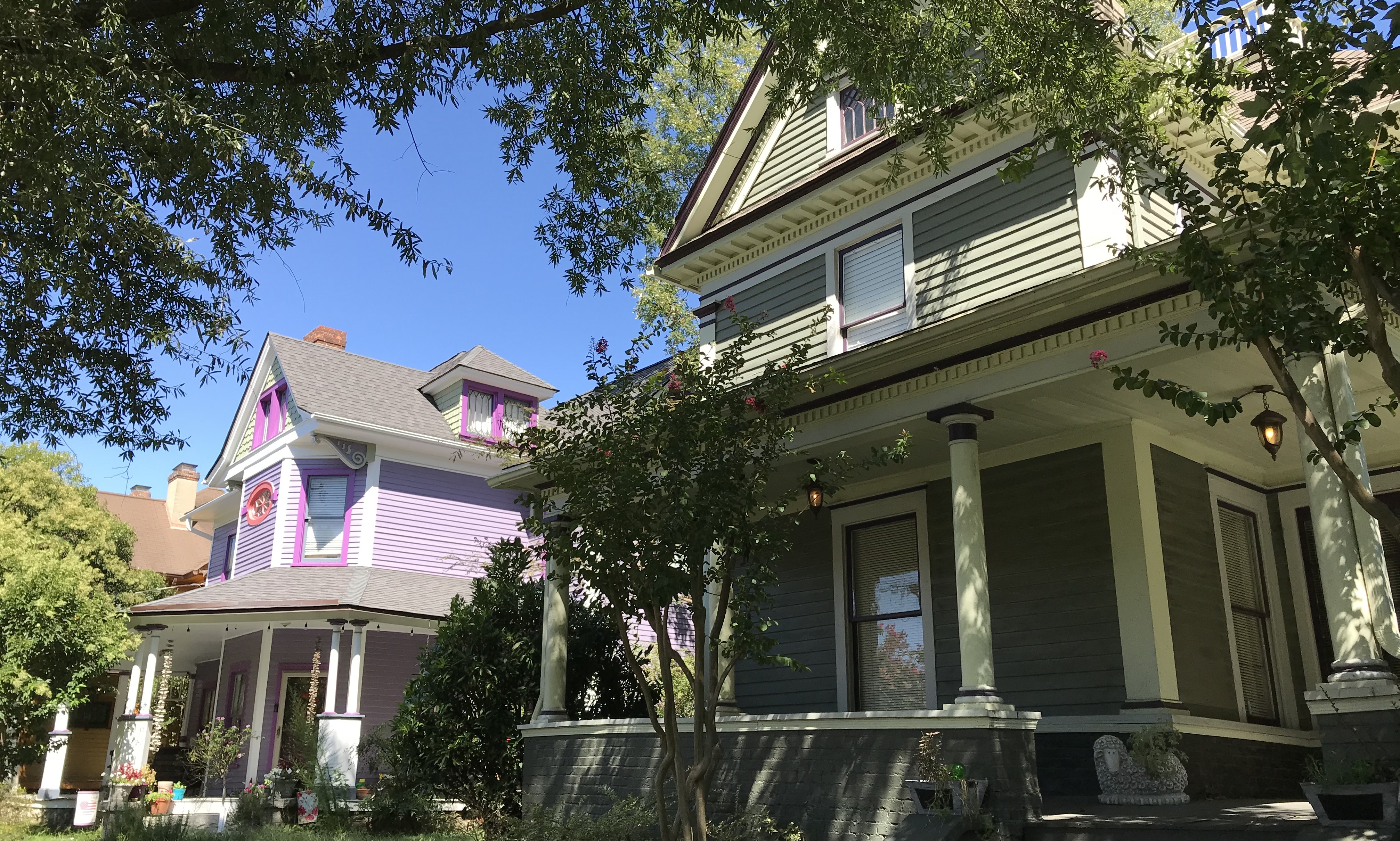 On September 15, 1875, the Greensboro Patriot newspaper announced “Mr. Eugene Morehead has tendered the city the right of way for several beautiful streets over his lands on the South-Western limits of the city. This is right and soon we may expect to see houses going up in that quarter. The city has had the streets surveyed and Walker street will be opened at once – giving our country friends a good road to the city without encountering the two ugly hills on the old Salisbury road.”

The Morehead lands referenced in the article included portions of Blandwood, the ancestral seat of the Morehead family located on Washington Street. The Salisbury Road was a route that likely dated to the founding of Greensboro that connected Guilford’s county seat to communities southwest such as Jamestown, High Point, and beyond to Salisbury. The road took a diagonal path from the intersection of Spring Garden and South Mendenhall streets northeast by Wafco Mill and terminating at West Market Street near today’s Eugene Street. The two hills referenced might have been ugly visually, but the unpaved road would have been quite challenging to horses and carriages during wet weather.

When Eugene Morehead realigned the diagonal Salisbury Road to conform to Greensboro’s grid, he established a new east-west thoroughfare. The road captured the attention of Greensboro’s growing white collar managerial class. Those prosperous residents sought to erect imposing new residences along impressive avenues in the city, and Walker Avenue certainly met their goals.

Today, a trio of impressive houses survive along Walker Avenue as a picture of Victorian Era Greensboro. Their collective narratives add to the fascinating history of Greensboro’s first historic district.

Architecturally, this home brings together two architectural styles that were popular in the College Hill neighborhood.

Orlo Epps, Greensboro’s well-known architect and owner of the residence at 808 Walker Avenue, likely erected this house as a speculative investment around 1902. The first tenant of the house appears to be civil engineer William Burgess Trogdon (1855-1934), his wife Cora (1869-1927) and their family of five children. A Reidsville newspaper reported that the Trogdon family lost their home in that city to fire in April 1903 and reported on June 4 1903 “W. B. Trogden [sic] went over to Reidsville Saturday night after his family and they will come to this city tomorrow and reside at 810 Walker Avenue.” Trogdon owned a prolific land surveying practice – his work included the Frank Mebane’s German-American Mill woolen blanket mill in Spray, plats for neighborhoods such as Park Place, and Battleground Avenue north of Greensboro. In 1904 the Trogdons purchased and relocated to new house at 1111 West Market Street (also still standing).

The Rackley family next occupied of the house. On Dec 21, 1904 the Greensboro Patriot reported “Mr. W. G. Rackley who recently moved here from Franklin County to take advantage of the exceptional educational facilities the city affords, has bought the Epps property on Walker avenue, and will become a permanent resident.” Deeds indicate Rackley purchased from Orlo Epps for $2,500 – the property value verifying a substantial structure was on the property at the close of the sale.

William Gaston Rackley (1849-1909) was a merchant in Wilmington and Louisburg before acquiring this Walker Avenue residence in 1904. The family included his wife, Mary Moore (1862-1930), daughter Inez, and sons Robert F (salesman) and Royce “Ross” (shipping clerk). They were members of Walker Avenue Presbyterian Church, and Rackley was employed in the insurance trade. After his death in 1909, the family maintained ownership of the house until 1920.

The two-story frame residence features a complex Queen Ann form embellished with Neoclassical details. The Queen Anne forms reference a high hipped roof with lower cross gables, a second-floor balcony, and an extensive wrap-around porch. Neoclassical details include Tuscan porch supports and corner pilasters, and a modillion cornice. The style, recognized as the “Free Classic” subtype of Queen Anne architecture, reflects the national influence of the World’s Columbian Exposition of 1893 in Chicago.

This grand house remains well-preserved due to its ownership by one family for half of its existence.

On April 2, 1900, George Gilliam “Tom” Gregory (1869-1950) purchased a lot from Mrs. B. A. Cunningham for $450. The low cost of the sale indicates a house was not present at that time. Tom and his wife Sadie Byers (1881-1958) were wed in 1899 and they occupied their home in time for their inclusion in the 1903-04 Greensboro City Directory. The couple eventually had six children. George held a sales position at the Odell Hardware Company for 35 years and the couple were members of the West Market Street Methodist Church. Tragically, George was a victim of manic depression and was a resident of the state hospital in Morganton when he died.

The house remained in the Gregory family a remarkable amount of time! It only left the Gregory family when daughter Sarah Gregory sold the house to George Pawl in 1974. Pawl, in turn, sold the house to Kathleen and Alan Talansky the following year, and it was again sold two years later to Sally and Richard Mennen. By 1985, the house was restored and included on the College Hill Tour of Homes, described as “One of an outstanding group of Queen Anne houses on Walker Avenue…the current residents (Mennens) purchased and started an extensive renovation. In its early years this house was heated with coal fireplaces. There are six restored fireplaces throughout the house, all having carved details that are exuberant for the period. Ornate and highly detailed stairway, wrap around front porch.”

The two-and-a-half story frame house is a notable example of exuberant Queen Anne architecture, including an irregular roofline that blends hips, gables, and dormer windows. A prominent chimney rises as an element of the façade, and other unusual features include a flared roofline, cut-away bay window, and a wrap-around porch with corner entry. The elliptical window centered on the front bay has served as the logo of the College Hill neighborhood since the 1980s.

The Harding House at 818 Walker Avenue is a touchstone to the days when Greensboro was a center of the insurance industry.

Previously identified as the Waddell House, research indicates the house was in fact constructed in 1899 by Mrs. Mary “Kate” Jollee Bryan Harding (1856-1925). Kate married Bernard Reaux Harding in 1892. From their home in Raleigh he served as a mechanic for the Seaboard Air Line (railroad). After his death from heart failure in 1897, Kate sold their Raleigh home and moved to Greensboro to live with her sister’s family in a house on East Market Street. It is likely she erected the residence at 818 Walker as in investment, or perhaps intended it for her own use.

Instead, the house was immediately rented by Duncan Cameron Waddell (1843-1916). Waddell was a native of Hillsborough, and brother of the infamous A. M. Waddell, the mayor of Wilmington after the only successful coup d’état in US history. He was also the boyhood friend of Julian Carr of Durham. A confederate, Waddell married Mary Wright in 1867 and was a leading figure in Asheville where he sought to establish a trolley line in 1896. Moving to Greensboro, Waddell partnered with S. H. Boyd and R. G. Glenn to establish a fire insurance company in 1899. Later he was an agent with Wharton, McAlister & Vaughn. The Waddell family moved to a new residence on West Market Street in 1905 (no longer standing). That same year he sold his insurance interests and then chartered the Central Electric Company in 1906.

The Harding House was next rented by Nancy Booker and Robert Sidney Petty. Previously associated with the Greensboro Boiler and Machinery Company, in 1906 Petty co-founded the Wayland-Newman Machine Company. The family remained tenants of the Harding House until 1914.

Numerous owners and occupants followed, until 1981 when the property was acquired by the Greensboro Redevelopment Commission. The Commission was incorporated in 1951 to conduct studies, formulate plans, and implement redevelopment projects for blighted areas within the city. In 1979, after a College Hill Concept Plan was approved by residents and city council, the Commission first identified properties to be acquired for redevelopment. The Commission partnered with the Greensboro Board of Realtors to invest $75,000 converting the four-unit apartment house to its original single-family occupancy. At the time, the Harding House was the largest residential rehabilitation in the history of the program.

Like its neighbors, the Harding House stands two-and-a-half stories in height. The Queen Anne-style, frame structure is composed of a hipped roof cross gable roofline pierced by tall corbelled chimneys. The gables are sheathed with squared shingles, as is a small balcony on the second floor. The wrap-around front porch sports squared columns with fluting.

These three houses represent an important era in Greensboro, as the city grew to become an insurance and industrial center for the state. The architecture of these houses demonstrates the aspirations of citizens who commissioned stylish residences to display their prosperity. The hard work of preservationists in the 1970s and 1980s allows for the enjoyment of these buildings, and the College Hill neighborhood, today.