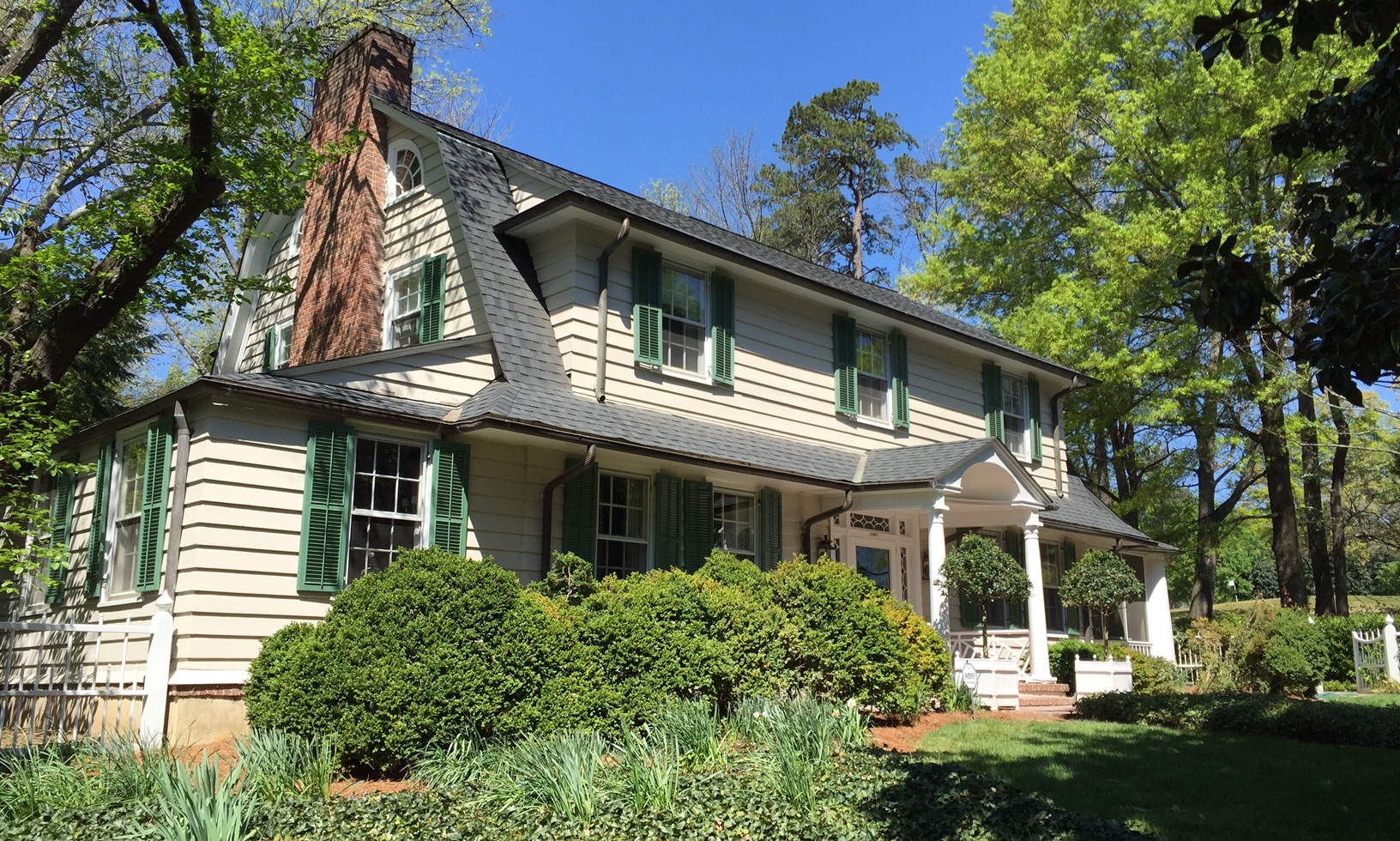 One of eight residential commissions by Philadelphia architect Charles Barton Keen in Greensboro, the Cora and Major John E. Rossell Residence, 1607 Carlisle Road is a charming example of his work and stands as one of the first generation of homes constructed in Irving Park. The house was commissioned around 1919 by its first occupants, Cora Galloway Mebane (1891-1976) and Major John Ellis Rossell (1894-1939).

Major Rossell was a native of Washington, the third son of Brigadier General William Trent Rossell. His mother was Jane Graham “Jeannie” Ellis, a daughter of North Carolina Governor A.W. Ellis. Rossell entered the United States Military Academy at West Point in 1911. He graduated in 1915 and entered the Army as a Second Lieutenant with the Sixth Infantry.

Major Rossell is remembered as one of the few qualified aviators in the Army on the eve of World War I. His skills were too valuable to send overseas, so he remained in the United States, training pilots in San Diego, San Antonio, and Louisiana. He pioneered the use of radio communications in aircraft, but not serving overseas was one of the great disappointments of his life.

Major Rossell married a Rockingham County native, Cora Gallaway Mebane, in 1917. They had two children, John Ellis, Jr., born in 1918, and Letitia Carter, born in 1920. After their marriage, he served as the commanding officer at Mitchell Field on Long Island in 1918, but the next year he resigned to accept a position at Penney and Long, Incorporated, a Greensboro-based regional dealer for the American Motors Corporation. In 1921, Penney and Long was awarded the sales rights for Dodge automobiles in Greensboro at their salesroom across Elm Street from the O. Henry Hotel. Cora’s brother R. Jesse Mebane was the treasurer of Penny & Long; he also commissioned a home by Charles Barton Keen.

For the Rossells, Keen designed a handsome two-story frame Colonial Revival dwelling with a gambrel roof and a pent eave. Today, this house form is identified as Dutch Colonial, but when the Rossell House was constructed it was likely a casual blend of Philadelphia Georgian and Craftsman features. Colonial details of the house include a central classical entrance flanked by sidelights with a transom and six-over-six window sashes with louvered blinds. Arts and Crafts details include the robust plaster porch columns and the original scroll-bracketed entry porch.

The Rossell family moved to St. Andrew’s Road in 1922 and left Greensboro in 1929 when the Major took a job in Bridgeport, Connecticut, with Sikorsky Aviation. He died in Staten Island, but Cora survived several decades until her death in Wilmington, North Carolina.

The second family to call the house their home was that of Louise Wolf and Herman Cone. Cone was the son of Greensboro industrialist Moses Herman Cone, and when he purchased the house in 1922 he served as treasurer of Proximity Manufacturing Company and assistant treasurer of the Cone Export & Commission Company. Before taking residence in Irving Park, the Cones lived close to family interests near the intersection of Summit Avenue and Bessemer Avenue. The Cones commissioned Greensboro architect Harry Barton to nearly double the size of the house with a large rear ell around 1925. Barton was a well-known designer, having completed other high profile projects in the city, including the President’s House at the Woman’s College (now the Armfield-Preyer Admissions and Visitors Center at UNCG on Spring Garden Street) in 1923 and the Cone Export Building on Greene Street (today the home of the Community Foundation of Greater Greensboro) in 1924. The family quickly grew to include their sons, Herman Junior and Alan Wolf. The Cones remained at the Carlisle Road address until moving across the golf course to 806 Country Club Drive in 1937.

A number of subsequent owners included Anne and Benjamin Cone, Isabel and Sydney M. Cone, Jr., and Eleanor and Dr. C.R. Mills. Jackie and Hugh Humphrey acquired the home in 1968 from Jessie and Walter B. Elcock, and Jackie continues ownership today. The structure was inscribed to the National Register of Historic Places as part of the Irving Park Historic District in 1994.

This house was open for tours in 2016 as part of Preservation Greensboro’s 6th Annual Tour of Historic Homes & Gardens.