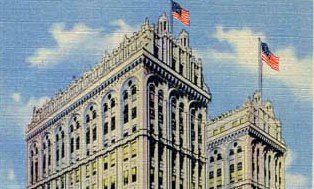 This building has endeared itself to Greensboro residents ever since actor Will Rogers visited the city and exclaimed local citizens were as proud of the one building on its skyline as parents are of a baby’s first tooth! The tower briefly laid claim as the tallest in the state, and perhaps even the South when completed in 1923.

The building came about through a unique partnership between two men: Julian Price and Charles Hartmann.

Julian Price (25 Nov 1867 – 25 Oct 1946) was chairman of the board of the Greensboro-based Jefferson Standard Life Insurance Company. He was born in Meherrin, Lunenburg County, Virginia near Richmond, the son of Margaret Greene Hill and Joseph Jones Price and educated in a one-room schoolhouse. His first job was cutting firewood for use by wood-burning locomotives alongside the railroad. From his associations with the railroad, he learned Morse code and found employment as a telegraph operator and dispatcher for the Southern Railway. This position took him to North Carolina in 1895, moving first to Durham and shortly thereafter to Greensboro.

In Greensboro, Price took a position in 1903 a representative of the American Tobacco Company, though he was more intrigued by the insurance business where he found employmentwith the Greensboro Life Insurance Companyin  1905. When Greensboro Life joined with Jefferson Standard in 1912, Price was elected vice-president and agency manager. He was promoted to president of the company in 1919 and served in that capacity until 1946. Noteably, his leadership resulted in company growth from assets of $9.7 million and insurance in force of $81.6 million to assets of $179.2 million and the insurance in force exceeded $672 million. At that time, Jefferson Standard ranked thirteenth in the nation among insurance companies.

2011 Image of the Jefferson Stadard Building

Charles Hartmann (11 June 1889 – 31 December 1977) was an architect, born in New York. He likely recieved training in New York through both the Mechanic’s Institute as well as the Beaux-Arts Institute of Design. By 1905 he was serving as an apprentice in the New York architectural firm of Warren and Wetmore where he assisting in the design of Grand Central Terminal’s main lobby ceiling. Hartmann began work as a draftsman in 1907 for New York architect Charles E. Birge before taking a positiona s Head Draftsman and Associate Partner around 1913 with William Lee Stoddart. Stoddard’s firm was one of the leading hotel architects in the United States, including the O.Henry Hotel in Greensboro.

In 1919, New York architect Charles Hartmann came to Greensboro to design a Foor and Robinson chain hotel named the O.Henry Hotel on North Elm Street.  Price offered Hartmann the job of designing the corporate tower for Jefferson Standard Insurance if he’d move to Greensboro and open a practice. Hartmann accepted the offer and spent the rest of his life in Greensboro designing notable buildings throughout North Carolina.

Price sought to build the corporate tower for Jefferson Standard as the highest building between Washington and Atlanta because he recognized the manner in which the public sought “to identify their financial institutions with impressive buildings that inspire confidence.” Pragmatically, he wanted all employees of his growing company in one building instead of being scattered in a half a dozen buildings all over Greensboro. The skyscraper cost $2.5 million, plus $177,000 for the land, both paid in cash. The insurance company occupied only five floors in the tower the rest was leased to doctors, dentists, lawyers, insurance agents, various clubs, and contractors. It was heralded as a “city within a city” containing 129 businesses and 1,000 employees. The first floor contained a bank, a railway ticket office, and various retail stores including a florist, jeweler, a tobbaconist, abd a barber.

The Equitable Building in New York

Its U-shaped floor plan allowed light and air into the central offices of the massive building, a technique that following the lead of earlier skyscrapers in lower Manhattan such as the Equitable Building of 1915. Hartmann borrowed another feature from the Equitable Building: the use of terra cotta tile to decorate the elaborate facade. Terra cotta held several advantages over natural stone or cast iron. It was lighter in wieght for construction and application on tall buildings. It was also more adaptable in form and color, and its glazed surface was brighter and needed less maintenance. The tile was likely supplied by the Federal Terra Cotta Company of Woodbridge, New Jersey.

A terra cotta bust of the company’s namesake, President Thomas Jefferson, adorns the pediment above the doorway, and buffalo nickels represent thrift and economy aside each window on the ground floor. The building was listed on the National Register in 1975, among the earliest in the city. In 2012, Lincoln Financial was recognized with a Preservation Award for their restoration and stewardship of the building.