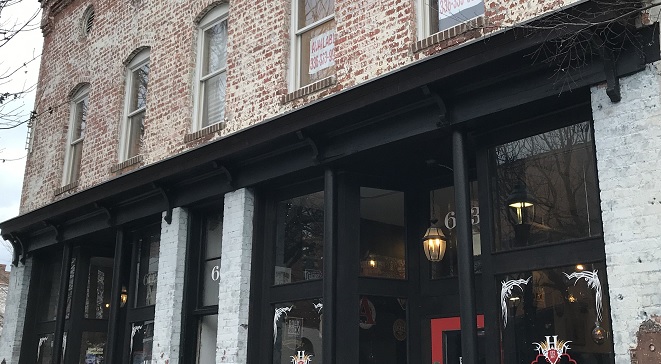 One of Old Greensborough’s pivotal historic properties is currently under consideration for local landmark designation. The corner building, known as the Weaver-Sherwin Building at 603 South Elm Street, exemplifies themes of history and architecture that make South Elm Street one of the best-preserved big city downtowns in North Carolina.

The building was constructed in 1903 by Cyrus P. Frazier. An article in the “The Greensboro Patriot” newspaper printed in July 8, 1903 stated “Material is being placed on South Elm street for a block of five new store buildings which will be erected on the vacant lot adjoining Townsend’s implement store on the south and formerly owned by Dr. Benbow, Prof. C. P. Frazier will own two of the buildings…The buildings will be two stories in height, eighty feet deep. Apparently, plans changed later that summer when separate investors took each of the four buildings.

Cyrus Pickett Frazier (1853-1933) was a member of the Society of Friends (Quakers) and born in Randolph County south of Trinity. He was educated at Trinity College (Randolph County) and Haverford College near Philadelphia. In his life he was a professor, administrator, and entrepreneur. His special interest was real estate development, but he also served as the superintendent of Greensboro City Schools (1985-1988) and was a long-time trustee of Guilford College (1901-1931). His fine Queen Anne-style home, originally located at 313 West Washington Street, was relocated to 300 Murray Street in 1988 where it stands today. Frazier Elementary School located at 4215 Galway Drive in South Greensboro was named in his honor. His son, Robert, was and attorney and Mayor of Greensboro from 1951 to 1955.

The building Frazier commissioned is two-stories in height and features a double-storefront separated by a central door accessing the second floor from South Elm Street. Architectural embellishments are simple, but round attic vents, segmental arched second floor windows, and a classical cornice above the double storefronts reference Italian influences that were popular during the Victorian period. The well-preserved storefronts are remarkable survivors along the dynamic and changing street scene of South Elm Street.

The first occupant of Frazier’s investment property was Edgar H. Weaver, who operated a grocery store in the northernmost storefront and lived on the second floor. The southernmost unit was first taken in 1907 by the Greensboro Steam Bottling Works, a company associated with the manufacture of early soft drinks. Numerous occupants followed, as the shopfront served as an incubator for small businesses – as they outgrew their spaces – or failed.
Former occupants of the Weaver-Sherwin Building catalog Greensboro’s entrepreneurial spirit during the first half of the twentieth century. The roster includes Mint Cola Bottling Company, King Cola Bottling Company, harness maker Cornelius N. Robeson, Jr., Acme Furniture Company, butcher William L. Cates, The Princess Mary milliner shop, and Hyman Furniture. Sherwin’s Feed and Seed occupied the building first in 1939, but Herbert and Edith

Sherwin acquired the building in 1951, and maintained ownership until 1973. At that time, the building was sold to Richard and Mary Rhyne, who operated Rhyne’s Corner Cupboard antique shop (image, right) there until 2014. Today, the building houses Horrigan’s House of Taps and the Bearded Goat.

The building also held a central role in another chapter of Greensboro history – the Greensboro Tornado of April 2, 1936. The cyclone passed directly over the intersection of South Elm Street and Lewis Street, causing damage to buildings. Although the Weaver-Sherwin building survived the storm primarily intact, it likely suffered loss of window glass and perhaps an elaborate pressed metal cornice.

The building enjoys designation as a Contributing Structure within the Downtown Greensboro National Register Historic District, an honor it has held since 1980.

Recently, the building has been carefully refurbished by owner Eric Robert, who has worked to retain architectural features integral to the its history and authenticity. The nomination for the landmark designation was completed by preservation consultant Samantha Smith of Gate City Preservation, LLC. The nomination was reviewed by the Guilford County Historic Preservation Commission, which forwarded a favorable recommendation to the Greensboro City Council. Council will consider the designation at a future meeting.

Historical information for this article derived in part from research by consultant Samantha Smith of Gate City Preservation, LLC.

Postscript: The application to designate the Weaver-Sherwin Building as a Guilford County Landmark Property was approved by Greensboro City Council on April 21, 2020.