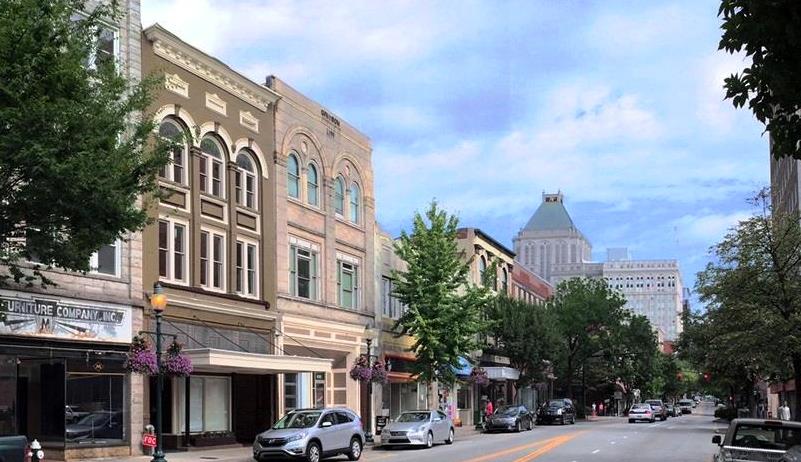 Greensboro fared poorly on two recently published lists by the American Institute of Architects of North Carolina ranking North Carolina’s Favorite Architecture (List A was solicited from the general public, list B was drawn from AIA members). Our beloved Jefferson Standard Building was the only mention, coming in at number 22 of 23 favorite places.

Our railway station and even Blandwood (designed by one of three founding member’s of the AIA) were bested by such popular structures as the Charlotte / Douglas International Airport Parking Deck (image right: AIA NC website), tobacco barns, and a building destroyed seven years ago – the Catalano House in Raleigh.

High Point earned a mention with the Natuzzi Americas showroom on South Elm Street, and Winston-Salem won kudos for Graylyn Conference Center as well as Old Salem. Asheboro saw recognition of the African Pavilion at the NC Zoo.

Does this mean the Gate City pales in comparison to the architectural splendor of Charlotte and Raleigh, each receiving six and eight nominations respectively? I really don’t think so. However, both of those cities are far ahead of Greensboro in understanding the power of architecture and good design. Raleigh has developed an appreciation of architecture in being the home of the NCSU School of Design since 1948. Charlotte was hit over the head with the importance of good design with architect Robert A. M. Stern’s 1986 proclamation that Queen City was “the ugliest collection of third-rate buildings in America.” Through the years, the press in both cities has cultivated a population that has an appreciation of architecture and design. In contrast, the Greensboro News and Record has provided little coverage on design issues, focusing instead on historic preservation (and often on the conflicts therein).

So, there you have it: very poor representation for the Gate City in terms of awareness of architecture in a statewide context. Preservation Greensboro’s own polling confirms that the Jefferson Standard Building ranks high in the minds of our citizens as an important landmark…along with our collection of unique college campuses, South Elm Street, and our neighborhoods. That appreciation has not, evidently, translated to higher levels.

PGI continues to cultivate initiatives intended to raise public awareness of architecture and design in Greensboro; it’s part of our mission. As Tribune critic Blair Kamin said last Thursday “If all of your city’s buildings and public spaces are third-rate, then the image of your city is third-rate.” We don’t need to head off on that path. Greensboro can do much better than that.

Thanks to Mac Whatley for the link to the AIA NC site.