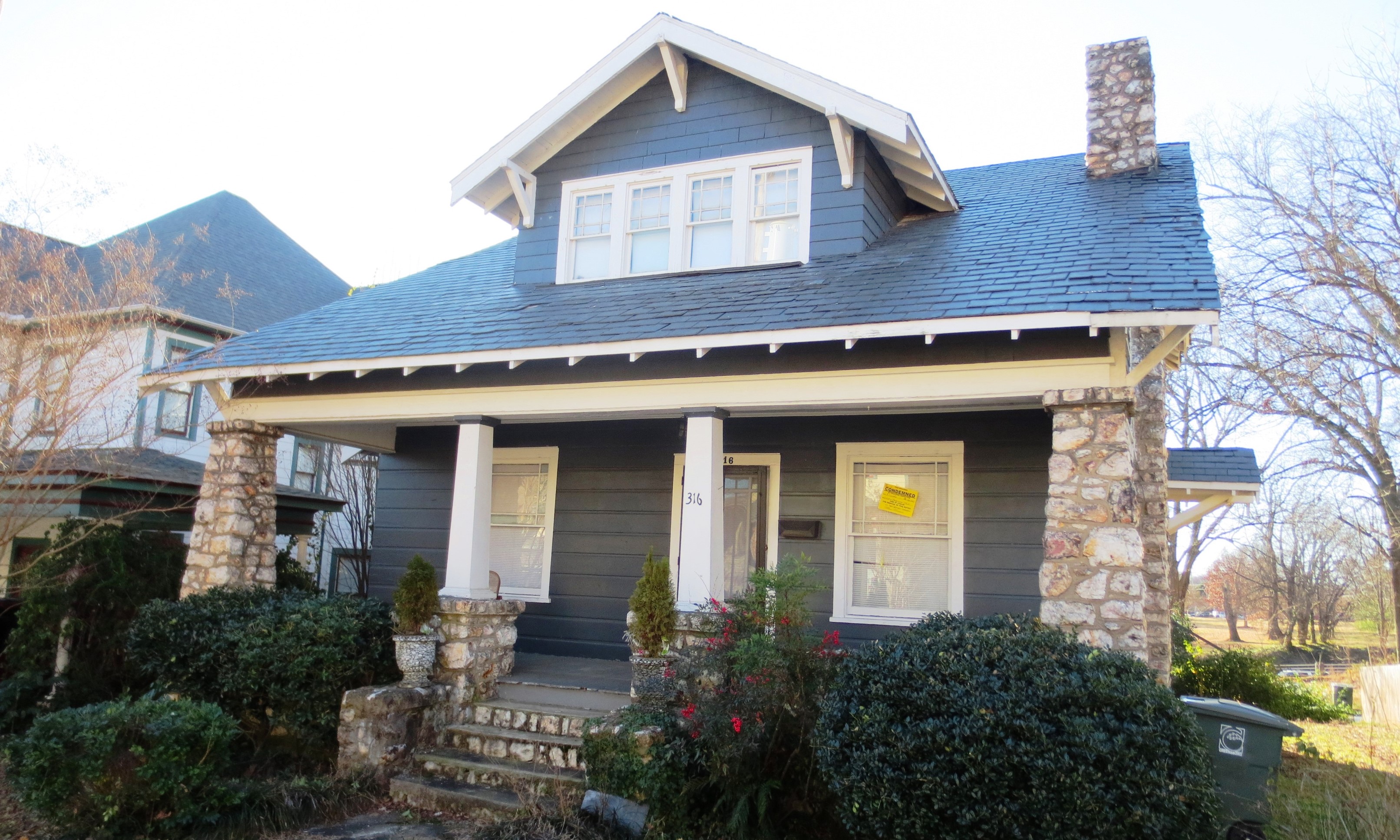 A 1923 Craftsman bungalow in the Southside neighborhood will undergo a complete restoration by a well-known restoration team.

The Coltrane-Gray House stands at 316 Murray Street in the midst of the Southside neighborhood. The home was one of a handful of properties that did not go through rehabilitation by Southside Builders a decade ago when the neighborhood was redeveloped under a “new urbanism” model. Constructed around 1923, the house was built by contractor Thomas Starr who lived a few doors up the street at 312 Murray Street. After completion Starr sold the property to Nora Alice Coltrane, who managed the house as an investment property by renting it first to business manager Russell Hall in 1923, and then to the Chandler family in 1925. Coltrane was the adopted daughter of Mrs. J. Addison Hodgin. Both women lived in the grand Neoclassical Revival House at 336 Martin Luther King Jr. Drive just a block to the west until Hodgin’s death in 1919. Nora remained in the Hodgin house through the 1930s.

Coltrane sold the house in 1932 to newlyweds Mary Margaret and Floyd Ernest Gray. At the time, Gray held a position at Southern Public Utilities as a clerk. The couple remained in the house until 1954 when they took a home on Westridge Road.  They likely rented the house to others until Mary Margaret sold the property in 1973.

The two-story, 2,006 square foot home is unusual in that it is accentuated by a stone known as “Milk Quartz” (image, right). The quartz is native to Guilford County, and synonymous with the Carolina Piedmont’s Carolina Slate Belt of metamorphic rock. It features a durable glazed texture and an opaque appearance. The Coltrane-Gray house contains numerous milk quartz features, including the front porch supports, foundation, chimney and the interior fireplace mantel. The stone is accentuated by a grape vine mortar joint, so-named for its resemblance to tubular grape stalk making its way along the mortar joint. Stonework and mortar joints were popular in Greensboro int he 1910s and 1920s, perhaps made popular by masons such as Andrew Leopold Schlosser.

The exterior of the home features typical Craftsman appointments such as wide overhanging eaves, a low-pitched roof, and oversized windows. Interior details are typical for the period in Greensboro, including narrow width oak floors, French doors, a breakfast nook, and an elegant stair balustrade. Craftsman details were novel in Greensboro in the 1910s and 1920s, considered exotic and reminiscent of Far Eastern architectural traditions.

The house remains in fair condition as determined by purchasers Cheryl and Tracy Pratt. The Pratts are well-known in preservation circles having completed a magnificent restoration of a c. 1916 bungalow on Magnolia Street in Fisher Park. The Coltrane-Gray house will be the couple’s first speculative project. Upon completion, they will sell the house fully restored, including and not limited to updated mechanical systems, a new kitchen and bathrooms, an improved floor plan, and freshly painted interior and exterior walls.