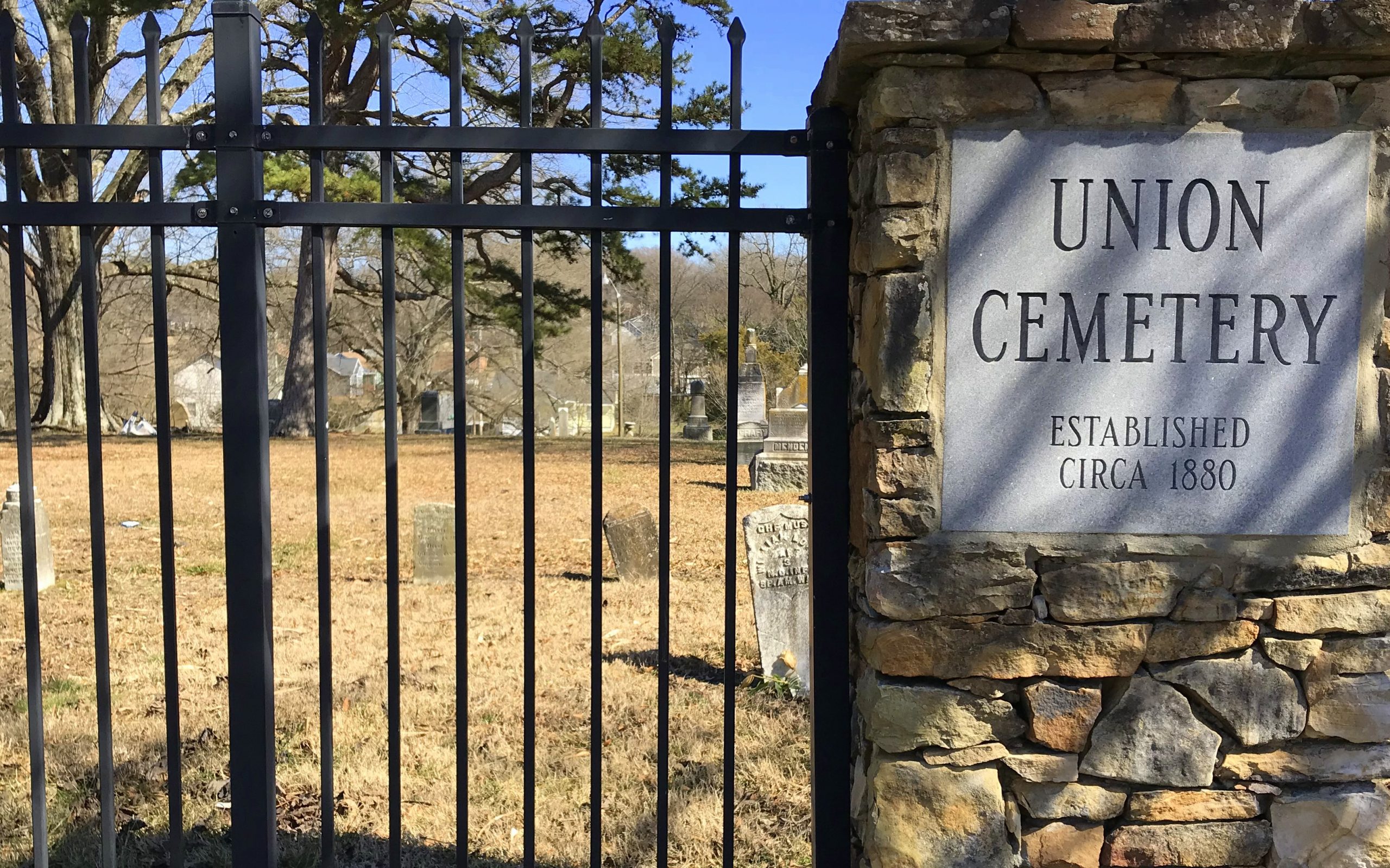 Union Cemetery is Greensboro’s earliest known Black cemetery. It is east of the historic Warnersville neighborhood and was named in the 1880s for a ministerial union of St. Matthew’s Methodist Church, St. James Presbyterian Church, and Providence Baptist Church. Closed for burials in 1917, the cemetery is thought to contain 1200 graves, and was added to the National Register of Historic Places in 1993.

According to research completed for the cemetery’s nomination to the National Register, “Union Cemetery for the Colored Race was established by the congregations of three churches in the early 1880s: the now St. Matthew’s Methodist, St. James Presbyterian, and Providence Baptist Churches. In 1917, the City closed Union stating that further interments would be a potential health hazard to residents whose homes surrounded the

cemetery. Its proximity to white South Greensboro, and the strained race relations of the mid-teens in the city may have a1so contributed to the commission’s decision to close the cemetery. Periodic interments were granted by permit only in continuously owned family plots which had sufficient space. Although maintenance of the cemetery was neglected) sporadic burials continued throughout the twenties and thirties. To provide
further burial sites for the city’s Blacks, Maplewood Cemetery was opened in east Greensboro in 1918.”

In the 1990s, Preservation Greensboro was one of several organizations that raised funds to care for the traditional African American burial ground located on South Elm Street. Funds were used to repair damaged stones and improve landscaping. This community support made a much-needed comprehensive restoration project including possible, and the donors are recognized on the entrance gates to the cemetery today.

Though many notable residents of Greensboro are interred in the cemetery such as Jacob Nocho, Harmon Unthank, and James Monroe Dean, a random sample of those interred reveals a fascinating story-line of Greensboro during Reconstruction and the Jim Crow Era.

James Black was the son of Jane Black, a notorious character in Greensboro history. Jane was a native of Virginia, was likely born in 1847 when slavery was legal in the United States. She had twelve children, of which only two remained with her by 1880 – James and Laura. Jane was annotated as Black in the census, while her children were classified as mulatto (mixed). James was employed to look after horses of people staying at a nearby inn at the age of 20. He died in 1892 at the age of 21. After his death, his mother took the moniker “Jane the Irrepressible” for selling food and liquor without a license. She was convicted of this crime in 1897 but was pardoned by North Carolina Governor Daniel Russell on account of her failing health. Of Jane, the Greensboro Telegram stated “This is more that half-a-dozen times the persistent amazon has been indicted for selling firewater, but she has never spent much time in jail.”

John McCauley, Jr. was born in Alamance County in November 1888 to John and Fannie McCauley. His family moved to 729 Guilford Avenue (today’s Westerwood neighborhood) where his father served as a sexton, an overseer of a church, likely the nearby St. Paul’s Methodist Episcopal Church at 710 Guilford Avenue. John Jr. was a Private with Company C in the 321st Service Battalion QMC (Quartermaster Corps) during World War I. He was 35 years old when he died of heart failure. His sister, Daisy, applied for his marker “for the unmarked grave of a soldier” in 1927.

Amy Bevill was born in 1844, when slavery was legal in the United States, likely in Center Grove township near the Hillsdale community. Martin Bevill was a blacksmith, and the pair were married July 15, 1859. In 1888, Martin purchased a quarter acre lot in Warnersville for $110 from Eugene Morehead, the youngest son of the former governor of North Carolina. From the family home at 806 South Ash Street, Amy earned additional income as a dressmaker and raised their five daughters: Bettie, Louisa (Bell), Sally, Corida (Cora), and Alice. Any died in 1903.

Today, the cemetery remains under the care of the City of Greensboro, though additional work is needed to conserve fragile and important gravestones.