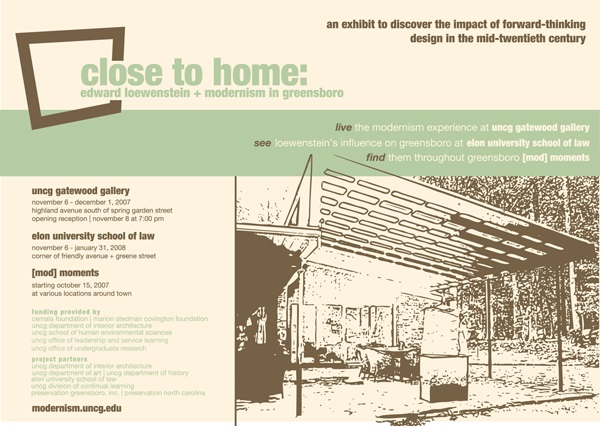 When someone in Raleigh discovered that a friend of mine was involved in the Loewenstein Legacy project here in Greensboro in 2004, the Raleighite exclaimed “I hope Raleigh will be more like Greensboro one day!” In terms of appreciation of modern design, Greensboro has been at the head of the pack in North Carolina. Imagine…the City of Oaks hoping to be more like the Gate City…much of the progress due to student-powered UNCG.

Last Thursday, the same kind of project that Raleigh envies was was held again here in the Gate City: the Close to Home: Edward Loewenstein + Modernism in Greensboro exhibit. This massive undertaking culminated with a grand opening of more than 300 Modern design enthusiasts. The exhibit has been developed over the course of the semester by 18 UNCG Department of Interior Architecture students in Patrick Lee Lucas’ upper level studio. These students, in the spirit of hands-on and part-time instructor/ architect Edward Loewenstein, were joined by partners throughout the university and the Greensboro community to create an exhibit that expands our understanding of Greensboro’s past.

The ongoing exhibit celebrates the work of Modernist Edward Loewenstein and his impact on Greensboro’s mid-century design scene. The multi-sited exhibit can be viewed through 30 November in the Gatewood Building, 527 Highland Avenue and through 31 January 2008 at the Elon University School of Law, corner of Friendly and Green Streets. You may also run into additional kiosks, featuring the dramatic angled roofline (seen in image, right) for which Loewenstein is known today, throughout the community. For more information, visit the exhibit website .

Special thanks to all who were involved in the project; you have contributed much to Greensboro’s understanding of its unique past and built environment. As recently as five years ago, few even knew of Greensboro’s modernist movement, nor could they identify Edward Loewenstein. My how things have changed. Our city is a better place for all of these efforts, and I can’t wait to see what further collaborations will turn up!

56th Annual Meeting Takes Stock, Recognizes Accomplishments, and Inspires Future
February 10, 2022
Please Join Us!
Did you know? As Greensboro’s only not-for-profit advocate for historic preservation, we receive no funding from city, state, nor federal sources. Our success is based on your support. Members receive two free passes to Blandwood, and much more. Preservation Greensboro is among North Carolina's oldest city-based organizations dedicated to saving our community's architectural treasures!
Join Us!
Go to Top
Loading Comments...