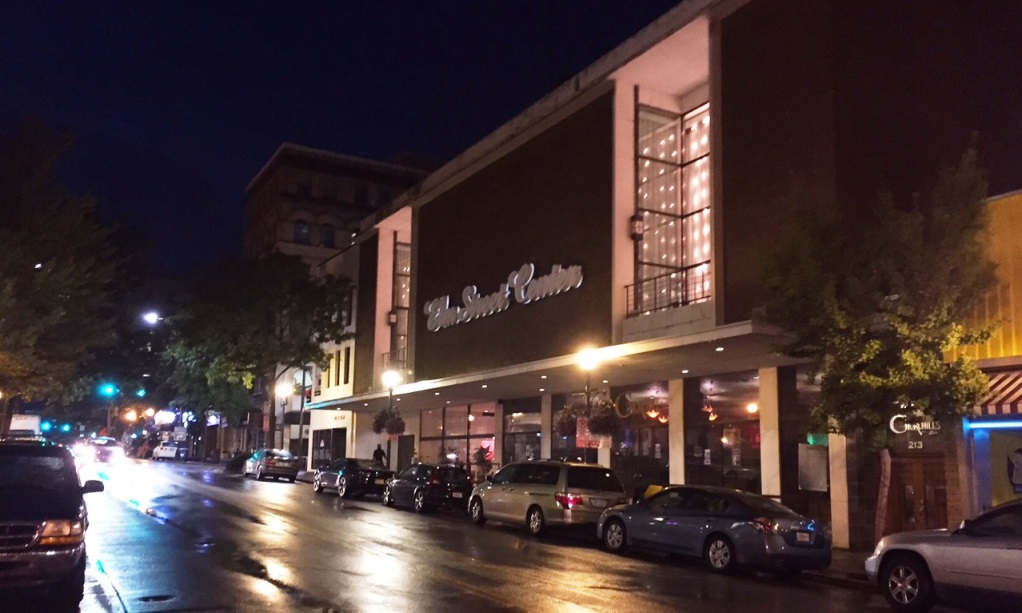 In 1955, the Greensboro Chamber of Commerce launched a program entitled “Keep Greensboro Ahead”, which was intended to ensure that Greensboro remained an industrial and manufacturing powerhouse in North Carolina. The city was second only to Charlotte in population at the time and suburbs were expanding north and west of the city, fueled by new offices of national firms such as Western Electric, Dow Corning, and J. P. Stevens as well as growth of local firms such as Lorillard, Cone Mills and Burlington. It was in the context of this expansion and prosperity that Greensboro witnessed commissions of architecture that illustrated some of the most notable examples of Modern architecture completed in North Carolina.

“Less is More” was the well-celebrated proclamation of the German design school Bauhaus, and Walter Gropius was Bauhaus’ founder. In Greensboro, one building is attributed to the world famous designer that helped introduce modernist design principles to the American public.

A native of Berlin, Gropius was an architect and art educator who founded the Bauhaus in 1919. The school became a voice in architecture and the arts for the then-radical belief that design should be both functional as well as aesthetically-pleasing.
In the world or architecture, the Bauhaus school advocated a functional and machined architectural style that eliminated surface decoration and extended the use of glass. Gropius left Nazi Germany secretly in 1934 and eventually joined the architecture faculty of Harvard University where he introduced Bauhaus concepts and design principles to a generation of American architects. Gropius worked on projects around the world, including Columbia, Mexico, the United Kingdom, and Greensboro before forming the Architects Collaborative in 1945. Among the Collaborative’s commissions were the U.S. Embassy in Athens and the University of Baghdad. The Pan Am Building (now the Metropolitan Life Building) in New York City was one of his later designs, developed in alliance with Pietro Belluschi.

His Greensboro project, annotated in his records as “Entwurf für eine Fabrik (Design for a factory) in Greensboro, North Carolina,” was constructed between 1944-46 on East Market Street as a local facility for Container Corporation of America. The expansive industrial building features Gropius’s trademark banded windows, multi-colored brick, and clean, plain walls (image, right). The main office exhibits large windows overlooking Market Street, and a small landscaped plaza. Unlike most industrial buildings of the time, Gropius presented a pleasing facade to the the public street while relegating loading areas and venting to the rear. Copies of the drawing and early photos can be found in the Harvard Art Museums collection.

Greensboro’s economy began to show signs of rapid growth in the years just after World War II, when Sears, Roebuck and the United States Postal Service both opened southeastern hubs in the city. Accordingly, another early example of Modern design came to Greensboro in 1949 when the New York firm Voorhees, Walker, Foley and Smith designed the austere Ellis-Stone department store on South Elm Street (image, top). The firm was led by partner Ralph Walker, once voted “Architect of the century” by his peers. The firm was well-known in New York as designers of the 1939 World’s Fair complex, 1 Wall Street (now the Bank of New York), the Barclay-Vesey Building, and New York Telephone Company headquarters Building in Lower Manhattan. Walker was the president of the American Institute of Architects when he designed the Greensboro department store. Known today as the South Elm Center, the building retains its Carrera marble entry, clean brick walls and rectilinear forms that exemplify early Modern period designs.

Greensboro-based architect Ed Loewenstein came to the city from Chicago in 1946, and immediately set a new standard for modern designs. Educated at MIT, Loewenstein was influenced by the organic architecture of Chicago architect Frank Lloyd Wright, and often incorporated large expanses of glass, natural textures, and dramatic interior spaces into his designs. Loewenstein is well-known in Greensboro for having designed the old Public Library (today the Elon Law School; image, right) at Greene Street and Friendly Avenue, as well as the Stern House, and UNC-G’s Alonzo Towers. The Elon Law School features contrasting aggregate walls, with sculpted relief panels designed by UNCG artist Gregory Ivey. Loewenstein’s own home on Granville Rd features hand laid stone walls, broad expanses of tilted windows, clerestory windows, and a relationship between interior and exterior space and light. The house was featured in the New York Times Magazine in June, 1955.

San Francisco native George Matsumoto also brought nationally popular contemporary designs to Greensboro in his 1958 plans for the E. K. Thrower House in Sedgefield. A graduate of the Cranbrook Academy of Art in Michigan, Matsumoto studied under internationally renowned architect Eliel Saarinen. In 1948, he and several other faculty and students assisted Henry L. Kamphoefner to establish the School of Design at North Carolina State University. During his tenure at the School of Design between 1948 and 1961, Matsumoto designed the Thrower house incorporating sleek lines within a natural setting that won an Award of Excellence from Architectural Record Annual Honor Awards in 1961. The notable landscape drew the attention of the American Society of Landscape Architects, which recognized Matsumoto’s gardens and terraces by way of an Award of Merit.

In 1962, A&T graduate W. Edward Jenkins established his own firm in Greensboro. Jenkins initially practiced design and engineering with Ed Loewenstein, but on his own, he designed a broad range of Modern style buildings, such as the J. Kenneth Lee House on Broad Avenue in east Greensboro (image, left), and the gymnasium for Dudley High School, for which Jenkins was recognized with an award. As one of the first African American architects in North Carolina, Jenkins is remembered for his innovative designs of brick and wood, as well as his engineering proficiency for spanning large spaces, as exemplified in his design for the Three College Observatory atop the Cane Creek Mountains south of Burlington.

By the late 1960s, Greensboro’s Modern movement was in its highest expression, and interest in Modernism resulted in local designs from architects of national and international significance. One such firm, Odell and Associates, had a strong influence on Greensboro’s corporate architecture. Arthur Gould Odell Jr., a native of Concord, N.C., graduated from Cornell University as well as the Ecole des Beaux Arts in Paris. In 1940, he founded Odell Associates in Charlotte, which became an influential firm in spreading Modern designs across the southeast. In Greensboro, the company designed several buildings, including the 16-story gray steel and blue glass Wachovia Building in 1966 (reskinned; render, right), the sleek Novartis complex on I-40 and Swing Road in 1967, and the striking Burlington Corporate Headquarters on West Friendly Avenue in 1971 (destroyed). Odell specialized in corporate architecture that demonstrated progress and innovation.

Another contribution to Modern design in Greensboro came from Eduardo Catalano of Cambridge Massachusetts. Born in Buenos Aires, Argentina, Catalano engineered unique modern structures such as his home in Raleigh (destroyed), built in 1954 after arriving to teach at the School of Design in Raleigh, NC. Catalano’s

work synthesized art, architecture, engineering, and science into designs. His Greensboro project was the Government Center, constructed on three blocks on downtown Greensboro between 1965 and 1975. Designed in the Brutalist style, the concrete buildings are massive and permanent, evoking simple geometric shapes often cantilevered over a central plaza (image, left). Other buildings designed by Catalano include the US embassies in Buenos Aires, Argentina and in Pretoria, South Africa and the Juilliard School of Music at New York City’s Lincoln Center.

Those interested in learning more about Greensboro’s Modernist past will have the opportunity to attend a free lecture entitled Mayberry Modernism on WEDNESDAY, March 6th at 6:00pm in Room 207 at the Elon Law School Building, 201 N Greene St, Greensboro. George Smart, founder of Triangle Modernist Houses will explore some of Greensboro’s wonderful Modernist gems and the architects who designed them, such as Lamar Northup, Willie Edward “Blue” Jenkins, Clinton Gravely, William Streat, Gerard Gray, and Ed Loewenstein.