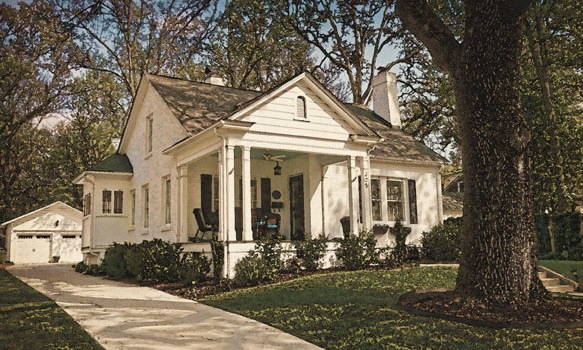 The Graves House is an interesting example of a Colonial Cottage. Built for only $5,000 on the eve of the stock market crash, the charming house was a presage for modest homes built during the Great Depression and the beginning of a “Small House Movement” that lasted through the middle of the twentieth century.

John Graves was born in Greensboro in 1897. Wife Ruth was born in 1903. The couple was married and lived on Arlington Street in the Old Asheboro Street neighborhood before purchasing a lot from A. K. Moore Realty in 1928 and erecting their Colonial Revival-style home. John served as an engineer with Southern railroad for nearly all his professional career. His wife was a native of Winston-Salem and a member of the West Market Street United Methodist Church. She was a past president of the ladies auxiliary of the local Brotherhood of Locomotive Fireman and Enginemen. The Brotherhood was one of several railroad unions of the late 19th and early twentieth centuries that began as a mutual benefit society for workers employed to operate dangerous equipment associated with steam locomotives.

This home is sponsored by Double Hung Windows, a Greensboro-based company that restored the original wood windows and provided new wooden storm windows for the home.

Tour this house and six others on Preservation Greensboro’s Tour of Historic Homes sponsored by the AIA Piedmont Chapter on May 19-20!

The Tour will feature the Sunset Hills neighborhood and highlight interesting architecture, design ideas, and local history. Plan to spend the weekend touring through stunning homes of the roaring 1920s. Advance Tour of Historic Homes Ticket Voucher Sales start April 1. Advance admission is $15 for PGI members, $20 for Non PGI members. On May 19th and 20th, tour tickets will be available for $25 at each home for all visitors. We will also be accepting credit cards at one of these homes.

We hope to see you in Sunset Hills! Learn more here!