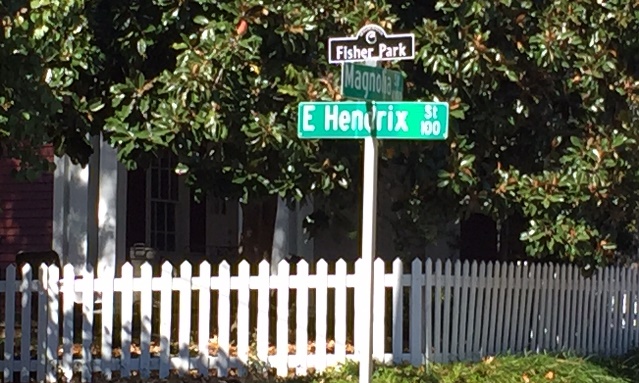 All too often, visitors and citizens wonder where exactly Greensboro’s historic neighborhoods are located. There are, after all, no lines on the ground to delineate the boundaries of the community.

However, now the curious need only look to look up.

Though sign toppers are new to Greensboro, they are common in other major American cities as diverse as New York City, Portland,and Dallas. Their advocates (including Preservation Greensboro!) say they build community identity and pride, cultivate an awareness of the importance of history and preservation, and are a gentle reminder of the diversity of neighborhoods in each city.

The pilot program is currently being evaluated by various city departments in order to determine future policy, sign applications, and placement and financing procedures. A few additional neighborhoods have already shown an interest in the toppers.

Perhaps additional sign toppers will appear throughout Greensboro’s other two historic districts as a tool to identify these neighborhoods. The city is rich in neighborhoods, and this flagship program is being carefully studied for future applications.

In the meantime, at least in one Gate City neighborhood, history is indeed looking up.