Secrets of the Greensboro Masonic Temple 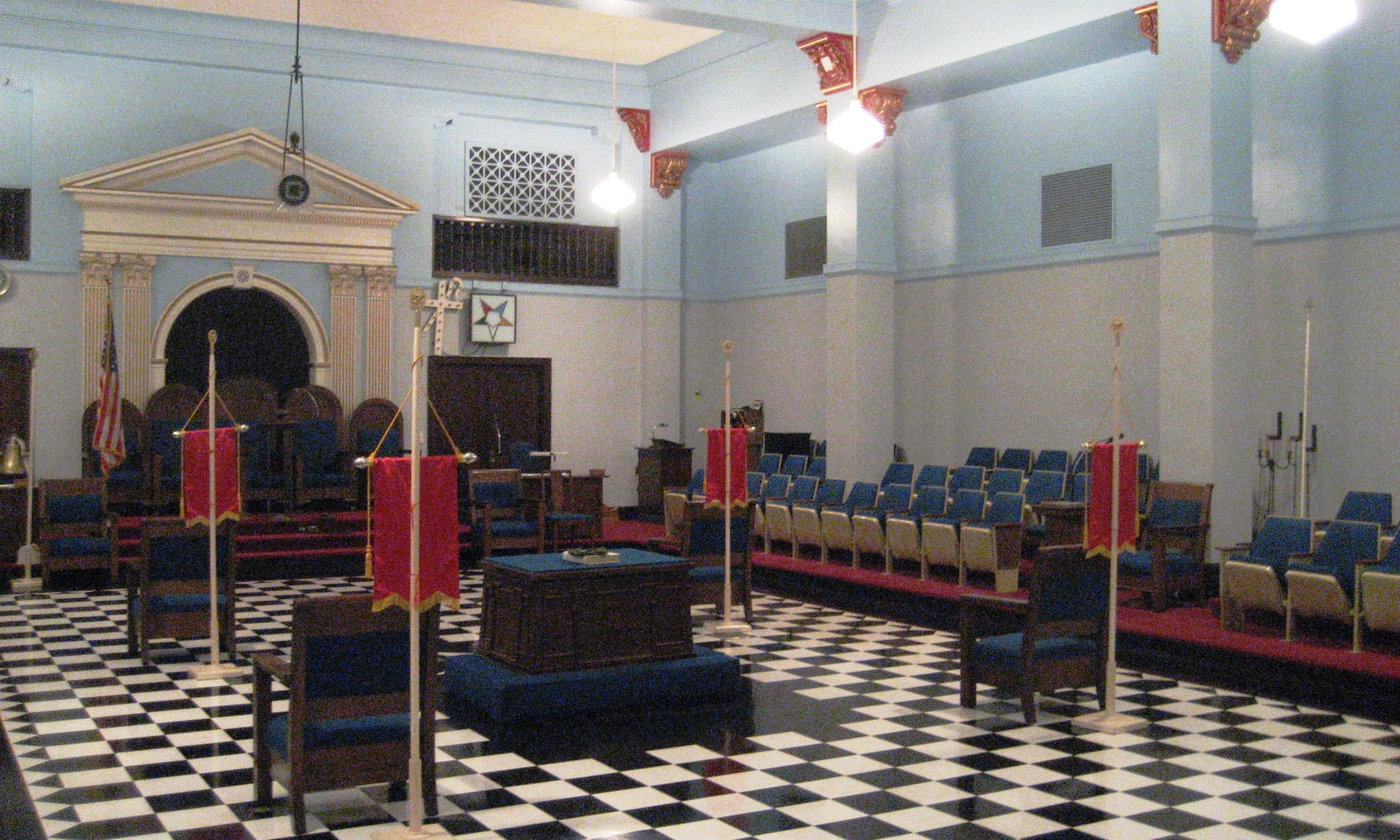 Masons have had a presence in Greensboro since shortly after the city’s founding, but few know about the history and architecture behind the façade of the fraternal organization’s impressive Temple at 426 West Market Street.

The Masons that call this Temple home have deep roots in our community, having been chartered on March 1, 1821 as the Greensborough Lodge # 76 – roughly indicating its place in the sequence of lodges established in North Carolina. The organization has had notable influence in the community, claiming members such as hotelier Christopher Moring, industrialist Henry Humphreys, attorney and Mayor Cyrus Mendenhall, businessman Julian Price. The organization assisted in laying cornerstones for many landmark properties in Greensboro, including Greensboro College’s main building (August 20, 1843), the 1858 Guilford County Courthouse, the McIver Memorial Building at UNC-G (May 25, 1908), the First Presbyterian Church on (Dec 23, 1890), and the Guilford County Courthouse (May 22, 1918). They also dedicated the cornerstones of the Masonic & Eastern Star Home on Holden Road (Jan 1912), and their own Greensboro Masonic Temple on March 20, 1928.

As a prominent organization in the Gate City, the Masons set high standards for their own lodge. Greensboro architect John B. Crawford was hired to develop several schemes and James Fanning was selected as the project’s General Contractor.

The monumental, stone façade is evocative of a Grecian temple, complete with fluted engaged columns topped by curled Ionic capitals, a Greek-key stylobate, a triangular pediment topped by an anthemion (Greek term for “flower”). Upon the entablature is inscribed eis doxan theou “for the glory of God.”

Behind the impressive public façade is a highly ceremonial interior laden with symbolism and ritual. Stylized blue flowers on the floor of the entry symbolize Forget-Me-Nots, a flower representative of Masonic oppression in Germany during the Second World War. An antechamber ritually displays the charters of the five local lodges and other organizations that meet in the building.

The main meeting chamber or Lodge is arranged along the lines of a traditional Masonic Hall (see diagram and third image), with the chair for the commanding Worshipful Master placed on the eastern wall three steps above the floor. To the west is the second-in-command Senior Warden, whose chair sits two steps above the floor. On the south wall, backed by three symbolic pilasters, is the third-in-command Junior Warden, who sits just one step above the floor. Other officers have ritual positions throughout the chamber that reflect their duties and hierarchy within the organization.

Above the meeting chamber is the Scottish Rite Room (fourth image), a palatial space flanked by theater-style seats and centered upon an elaborate stage. The polychromatic room takes an Egyptian theme, with sphinxes guarding the stage, and high columns topped by papyrus capitals. The Rite is an appendant body of freemasonry that used the room for theatrical productions that represent themes of history and morality.

The Masons enjoy a rich history that teaches personal responsibility for betterment in the world. In their belief, each man, woman and child can do something to help others and to make things a little better. Their efforts range from financial support of area children’s hospitals to individual aid for disadvantaged elders. Masons never solicit membership, so you will never be asked to join. Their motto “To be one, ask one” encourages each individual to follow their own leading to become a member.

Today’s Masons are no longer cloaked in the secrecy that might have been associated with their organization in the past. In fact, if you would like to explore the secrets of the Greensboro Masonic Temple on your own, you may do so during the Bicentennial Heritage Festival on April 12-13. On that day, the Temple will be open to the public. Though other impressive temples have been destroyed, such as the 1918 Egyptian Revival Charlotte Masonic Temple, Greensboro is fortunate to have one of the most impressive Masonic Temples in the state of North Carolina. Great preservation practices in the Gate City allow citizens here to visit places long lost in other North Carolina cities, and that’s something to celebrate during our Bicentennial.