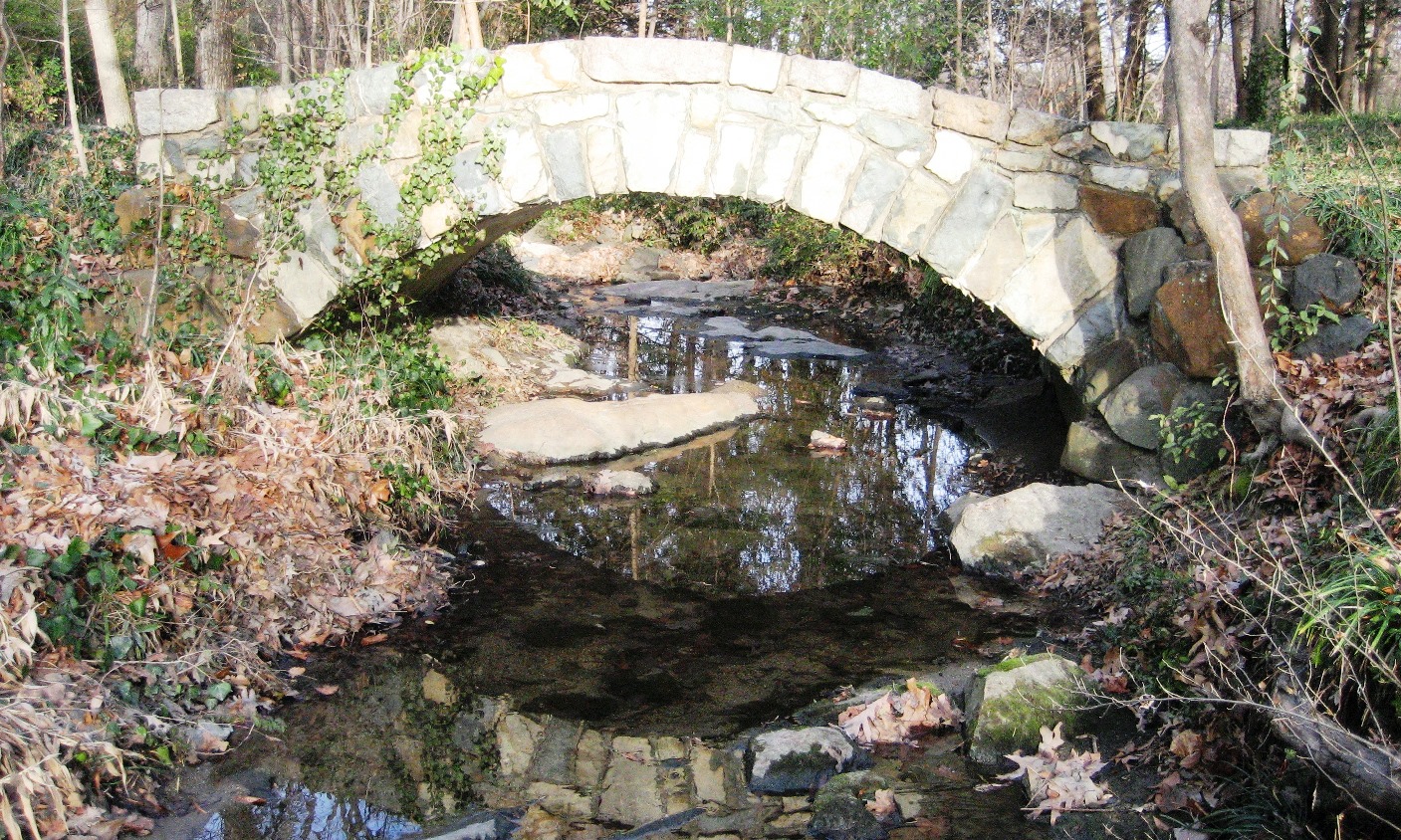 It’s true that one of the secrets of Fisher Park is that it is the geographic center of Guilford County. This point featured prominently in 1807, when the county seat was relocated from Martinville (near Guilford Battleground) to the relative wilds of central Guilford County. When surveyors established the center point in 1808, they found it “in the middle of a duck pond in a brush thicket.” Unsuitable for the location of a new town, lawmakers rectified the situation by platting the village of Greensborough a mile south at the intersection of today’s Market and Elm streets.

By the turn of the twentieth century, the area around today’s Fisher Park remained undeveloped as Lindsay’s Woods. Historian Ethel Stephens Arnett reported the area to be “a famous haunt for birds, squirrels, and ‘possums, which provided great sport for hunters.” One hundred years later, the park remains popular with all three long-term inhabitants.

The story of the creation of Fisher Park is a much celebrated part of Greensboro’s history. The fact that a wealthy British gentleman and gold prospector, British Captain Basil John Fisher (1851-1903), deeded the heart of his new subdivision – named in his own honor – to the city for perpetual public use is an inspirational lesson in civics. Few, however, know that this gesture of largess came with a few conditions.

Captain Fisher (also an astute businessman) required in the deed that the approximately 14 acre parkland be sold to the city for five dollars in exchange for the city “building a drive-way around the park” (now North Park Drive, South Park Drive, and Fisher Park Circle). The remaining natural space was “to be kept open for the joint benefit for said City of Greensboro … for the purpose of a public park and pleasure ground.” Fisher, who wanted to add value to his subdivision through the transaction, left nothing vague in his expectations on the city’s side of this deal.

In the 100 years since it was created, the park has seen elements come, and go. Few people today remember the shallow round concrete wading pond located just east of North Elm Street. It was a grand affair, roughly 30’ in diameter, and contained a central fountain to the enjoyment of area waders. This element was removed in the mid-twentieth century.

Others remember the “Summer House” a substantial wooden structure with a roof and open on all sides located just west of North Elm Street. The structure was a favorite meeting place for families, neighbors, and

especially neighborhood kids. Whether it was round (as remembered by some), or octagonal (as remembered by others) it provided a central focus for the park for decades until it was removed in the mid-twentieth century.

Others recall the wooden bridges (image, right) that crossed the small stream passing through Fisher Park. The rusticated bridges were built of railroad ties with rough-hewn and bark-covered branches forming handrails. These bridges likely did not last long, and were likely replaced during the 1930s by today’s handsome stone arched bridges. Possibly constructed through efforts of the Civilian Conservation Corps as part of President Franklin Delano Roosevelt’s initiative to put Americans back to work after the Great Depression, the stone bridges act as a uniting theme for the park and a popular subject for local artists’ canvases (image, top).

Recent efforts in park improvement have centered on honoring the park’s past, including the East Park’s “Genesis Monument” erected by historian Jim McLamroch to recognize the County’s center. Another monument along North Elm Street recognizes the history of the park through a gift from neighborhood resident May Gordon Latham Kellenberger.

Stewardship of the park has gone beyond routine maintenance. Over the past century countless city residents have volunteered their time and energy to the preservation of the public space. Such stewards include, but are not limited to amateur gardeners Dr. Robert “Bob” Garrard (1905-1989) and William Hugh “Bill” Craft, Sr. (1929-2010), who did much of the landscaping in the west park in the sixties, seventies, and eighties.

In 1975, grand plans to reconstruct the east park as Greensboro Beautiful Inc’s Bicentennial Garden received a harsh rebuke from the neighborhood. The plans covered 5.5 acres and called for 3,500 shrubs and 42,000 bulbs and shrubs with a fountain and and paths. Neighbors feared this plan deviated from the removal of the existing meadow and six mature trees. Resident Mary Lee Copeland was quoted in the Greensboro Daily News, saying “Fisher Park is already beautiful…[it] is the last natural open space in downtown Greensboro and the people love it the way it is.” With over 500 signatures, the plans for Fisher Park were scuttled and the east park space remained open and natural.

The Philadelphia landscape firm Wallace, Roberts, and Todd designed park improvements that worked to solve the longstanding problem of erosion caused by cars parking along the edges of the park. The solution was found in the form of landscaped parking bays lined by concrete curbing and aggregate gutters around the park, funded by a capital improvements bond in the 1980s. The project included decorative lighting and street signs (image, right).

A grant from the National Trust for Historic Places helped fund a reforestation plan for the park in the 1990s. With help from resident landscape architect Chip Callaway, the project focused on the park but included consideration of neighborhood street trees as well. The City of Greensboro contracted with Keely Nursery near McLeansville to supply the trees for the project. These efforts were complimented by the Neighborhood Association, which rebuilt the wisteria arbor in the West Park in 1996.

Recent work includes the addition of “New York City-style” trash receptacles in 2002, the replacement of playground equipment, and construction of a hand-crafted stone entrance to the park by scout Will Copeland in memory of his grandmother and long-time park advocate Mary Lee Copeland (image, right).

Fisher Park has had a lasting effect on the city’s popular consciousness, resulting in a civic appreciation for open spaces such as the Greensboro Arboretum and the Bog Garden. Momentum continues with plans for a Bicentennial Greenway and Gateway Gardens. These projects define the city in an age of homogenization in which Durham sometimes blends with Charlotte. Clearly Greensboro has a love affair with its system of public parks…and Greensboro’s public parks began with Fisher Park.