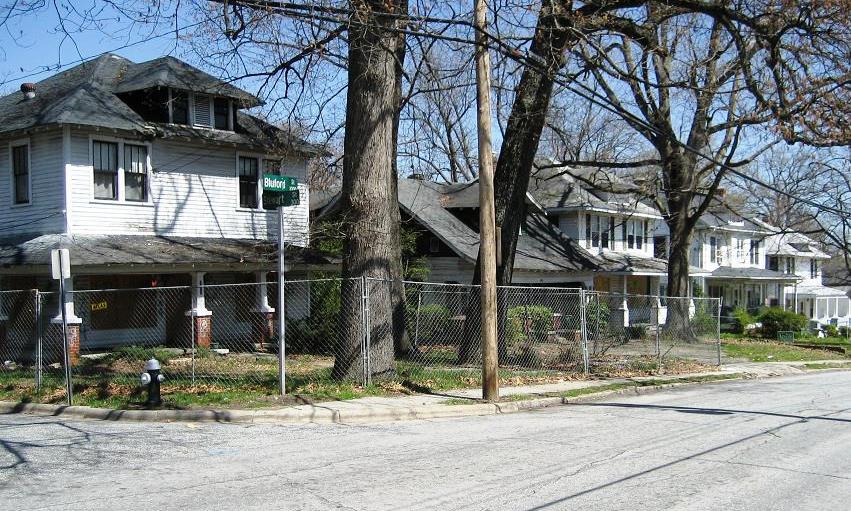 Guilford County has a wealth of treasured places, yet from time to time, some of these places are threatened with destruction. Redevelopment, facility expansion, inappropriate new development, and even neglect can cause concern among citizens who value places that hold unique personality and character. This Watch List was formulated in 2005 to illustrate our community’s interest in important historic places that are threatened in various ways. It has served as a spotlight that has gained the attention of many public news organizations, including the News and Record and WUNC Public Radio

A&T’s Heritage Row This historic community along Bluford Street overlooks the A&T campus to the south. Platted around 1900, the street was a convenient location for professors and administrators who built fashionable Craftsman bungalows and rectilinear Foursquares with generous front porches beneath pendulous oaks. The oldest home on the street is Nelson Station at 903 Bluford Street. It was constructed around 1903 as the home of Agnes and Walter Nelson. Mr. Nelson taught in A&T’s Mechanical Department. Their Queen Anne-style house features turned porch posts with sawn brackets. A block east is the Bluford-Jeffries House at 1007 Bluford Street. This handsome American Foursquare house was constructed in 1916 and features Prairie-inspired details and served as the home of Hazel and Dr. F. D. Bluford. Dr. Bluford was hired by A&T in 1916 where he quickly rose through the ranks to become President from 1925 until his death in 1955.

What to watch for: Bluford Street began to change in the late twentieth century as homeowners retired or moved away and their homes were converted for rental use. Poorly maintained older homes have increasingly been condemned and destroyed for parking or multi-tenant housing. As neighborhood land values continued to decline, A&T is taking the opportunity to expand its campus north across the street. The current campus master plan calls for the streetscape to be destroyed and replaced with green space within a 10-15 year timeline.

Adamsleigh Located in the Sedgefield neighborhood, Adamsleigh is an estate that features a sprawling 15,000 square foot manor house coupled with a caretaker’s cottage, a pond, two swimming pools, gardens, and other outbuildings. Greensboro’s grandest manor house was designed for their clients Elizabeth and John Hampton “Hamp” Adams by Luther Lashmit, a talented architect in the offices of the Winston-Salem firm Northup-O’Brien. Though plans were finalized the week of the October 29th 1929 “Black Tuesday” stock market crash, work on the opulent house continued without pause. Adamsleigh is the only known work of Lashmit in Greensboro. The eclectic Renaissance-inspired English Tudor style architectural theme includes a covered porte-cochere for arriving guests, a cylindrical stair tower topped by a conical roof, a classically-inspired entry-way to a flagstone terrace and lawn, and a stunning array of hand-forged wrought iron that graces windows, doors and a weathervane.

What to watch for: Though the estate has been little changed since the 1930s, and a majority of decorative treatments, finishes, and fixtures remain from the original period of construction, the property is currently vulnerable to destruction for redevelopment for new homes. As the city’s largest house, opportunities exist to return the home to its splendor using local, state and federal abatements and tax credits, but the home remains on the market years after being listed.

Angle House Carrie Lee Finney and her husband Charles Joel Angle built this home around 1907 and remained in the house until 1942 – a remarkable 35 year span in ownership! The approximately 3,800 square foot house was converted to income property in the 1980s, and suffered a fire in 2011. Costs to repair the house are beyond the mission and interests of the property owner, the neighboring College Place United Methodist Church. Church leaders are faced with the decision to demolish the home, or sell it for preservation. However, the listing price is steep for a burned property. City zoning requires a complete restoration and a return to a single-family occupancy. Architectural features such as the original diamond-pane windows and wide wrap-around porch must be retained. Some interior appointments, such as the original fireplace and oak flooring must also be retained. These features can be protected by a preservation easement, held and monitored by Preservation Greensboro.

What to watch for: Preservation Greensboro acquired the 105-year-old Carrie and Charles Angle House located at 919 Spring Garden Street in the heart of the College Hill Historic District. The organization is marketing the property to purchasers who will complete a restoration of the home. This is the first case in which MSD funds have been used directly for historic preservation purposes in Greensboro, a major development made possible through the work of the College Hill Neighborhood Association and their District 3 City Council representative, Zack Matheny, who took the initiative to persuade City Council to amend the applicable ordinances to expand the possible uses for MSD funding to include historic preservation purposes.

Cascade Saloon The historic buildings that line South Elm Street are considered by many architectural historians to be the best-preserved “big city” main street in the state, but the future of the Old Greensborough streetscape is tenuous, at best. The Cascade Saloon at 408-410 South Elm Street is exemplary of these historic resources that are sometimes preserved more by luck instead of through a government design review or overlay process (which downtown Greensboro does not have). The Saloon was built around 1896, and is notable for having housed an African-American-owned business at the turn-of-the-twentieth-century, rare on southern main streets during the Jim Crow Era.

What to watch for:

As the street continues to grow its profile as a viable commercial location, large companies and chain stores without appreciation of Greensboro’s culture might clash with the city’s celebrated historic core. With no design review or binding guidelines, property owners are free to alter, demolish or construct any building in ways that are not allowed in other major cities in North Carolina. Already, large parking lots replace historic buildings along stretches of the 300 and 500 blocks of the street and other critical buildings are threatened such as the Cascade Saloon. The Saloon needs a plan that takes into consideration the fact that it is a part of the South Elm Street historic district, and a locally designated Guilford County Landmark (as nominated by its current owner).

Glenwood Originally platted as a series of neighborhoods with names such as Silver Run Park, Jackson Park, Mt. Vernon Heights, and Piedmont Heights, the entirety is today recognized as Glenwood due to the primary avenue that featured a streetcar line connecting the community to the city center. The houses of Glenwood reflect a broad period of architectural styles and forms ranging from early Queen Anne, Craftsman, Colonial Revival, Foursquare and a Shotgun House. The construction methods for some homes were innovative; homebuyers could select plans from a catalog, and all materials arrived at the site ready to assemble. Grove Street is recognized as a commercial center of the neighborhood and is home to eclectic venues such as the Glenwood Community Book Shop, Glenwood Coffee and Books, and GlenFest held each spring.

What to watch for: Glenwood was the focus of city planners in 2008 when a Neighborhood Plan was created. The plan sought to address concerns of residents such as declining condition of housing stock, traffic issues, crime, and development. Since the report, the nearby University of North Carolina at Greensboro has announced plans to extend its campus into the northern blocks of the neighborhood. Meanwhile, disinvestment has continued in the southern blocks where several businesses have closed along Grove Street. Careful coordination with UNCG could enhance the northern edge of the neighborhood, and incentivizing property investment through National Register tax credits might energize Grove Street.

Model Farm The Model Farm, located at 2058 Brentwood Street in the southern section of High Point, was constructed around 1867 by Quakers. It stands as an important site representing Quaker history, particularly in respect to introducing agricultural technology to farmers in the state that were suffering from the devastation caused by the Civil War. During the 1870s and 1880s, the farm attracted a great deal of attention for its progressive and innovative agricultural practices.  It was so successful that North Carolina Governor Jonathan Worth proclaimed the farm as the “only green spot” in the Carolinas. The two-acre tract of land was listed on the National Register of Historic Places in 2010.

What to watch for: The property was donated to the Preservation Greensboro Development Fund in 2011 by former owners Ruth and Bruce Whitten of Manteca, California.  The gift ensures that the house and its charming details are refurbished and remain intact for future generations to enjoy. A buyer must be identified with a plan for restoration and extended use for the property in a manner that is considerate of the historic fabric of the property. Considering the current real estate market, that buyer might take some time to step forward.

War Memorial Stadium World War Memorial Stadium on Yanceyville Street was dedicated in 1926 as the first major monument in North Carolina dedicated to those who made the supreme sacrifice in World War I, and it has remained central to the civic and athletic life of the city to the present. In the words of Mayor Edwin Jeffress, “The soldier boys … wanted something that would be useful; that would help develop mind and body; that would in this way be a perpetual memorial to those who have passed.” The stadium lost its Minor League anchor in 2004, but it remains a popular venue for youth- and college-level baseball. Its structural integrity is questioned by some, and studies made into the soundness of the poured concrete structure are contradictory.

What to watch for: War Memorial Stadium continues to suffer from long deferred maintenance that has resulted in crumbling masonry, antiquated facilities, and an increasing number of safety issues. A comprehensive refurbishment is necessary to address these issues, and perhaps repurpose the facility for its next 100 years of service. This could be funded using a combination of public and private resources to assure that this landmark remain preserved as a functional memorial to those who gave the ultimate sacrifice for the enjoyment of future generations.

What to watch for: Preservation Greensboro and the National Trust pooled their resources to facilitate this project that will leverage the expertise of Dr. Benjamin F. Speller, Jr of Durham and Edenton. Dr. Speller served as Dean of the NCCU School of Library and Information Sciences between 1983 and 2003 and he is a recognized authority on college and university planning, specializing in institutional research, strategic planning, assessment, and budgeting. Over the next few weeks, Dr. Speller will examine challenges and opportunities related to the preservation of the First Baptist Church (image, right) and the Kilby Hotel, and outline one or more paths that would result in the preservation of both structures. Preservation is important to the east High Point neighborhood, as research has documented that preservation has a multiplier effect with construction jobs, infrastructure improvement, heritage tourism, and enriching the tax base. The alternative – demolition – will result in the creation of empty lots in a section of the city riddled with vacant lots.