An Old Place, A New Look 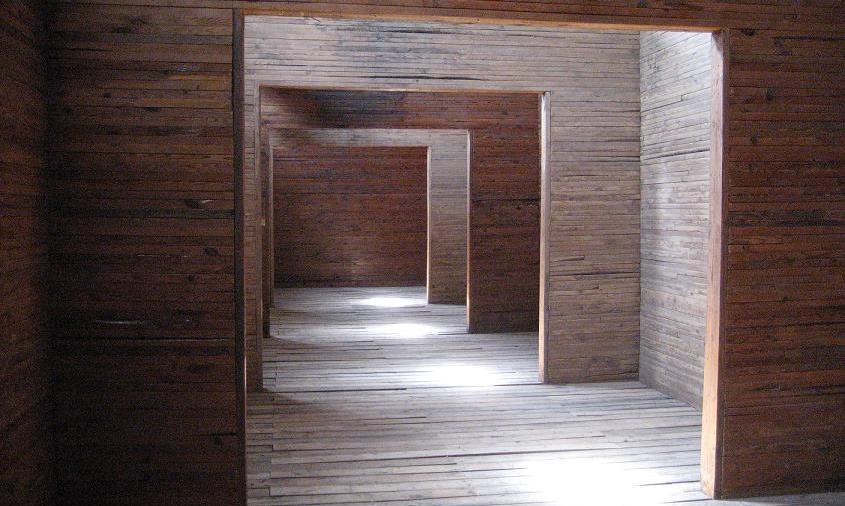 The North State Milling Company at 816 South Elm Street is an excellent example of an early twentieth-century industrial site.  The company was founded in 1912 and manufactured plain and self-rising corn meal and flour, hen scratch, bran, and feed for livestock. Grain was brought to the site by truck and by rail where it was processed and held for distribution across the region. The original three-level building features a handsome corbelled brick cornice and exterior painted sign advertising Daily Bread Flour, but the interior of the building holds exceptional detailing as well.

Processed grain was initially stored in vertical silos located within the building. Unlike the tall metal silos that were added with later expansions and lend their trademark silhouettes to the South Elm Street corridor today, these interior silos were constructed of hefty wood planks laid one atop the other. This substantial construction method provided support for the massive weight of tons of stored grain. The grain was accessed by use of a hopper at the base of the silo that dispensed material as needed.

Remarkably well-preserved, these silos remain an integral part of the Mill. Recent renovations by building owner Eric Robert have exposed these silos in a way that is both historic, yet dramatically contemporary. Robert divided the tall vertical space by floor level, reusing the planks once part of the wall, as flooring. Each roughly 10 foot silo space was connected by a broad passage to the adjoining space and opened to daylight from above. Although spaces are constructed of 100-year old wood, and conform to the dimensions of the original silos, the beautifully austere space is a minimalist setting that feels oddly futuristic.

Old buildings often feature universal truths that are manifested in the use of time-tested materials, organic spaces, and off-beat recycled spaces. The adapted silo spaces of the North State Mill feature many of these features, including heart of pine lumber, comfortably proportioned rooms, and repurposed grain storage volumes. Here is a great example of the beauty of art as an integral part of our architectural landscape.

Other interesting portions of the building are available for commercial adaptive re-uses. The site is located just a block south of the bustling South Elm Street historic district. Inquiries may be directed to Fred Preyer at 336.294.8900 or by email.