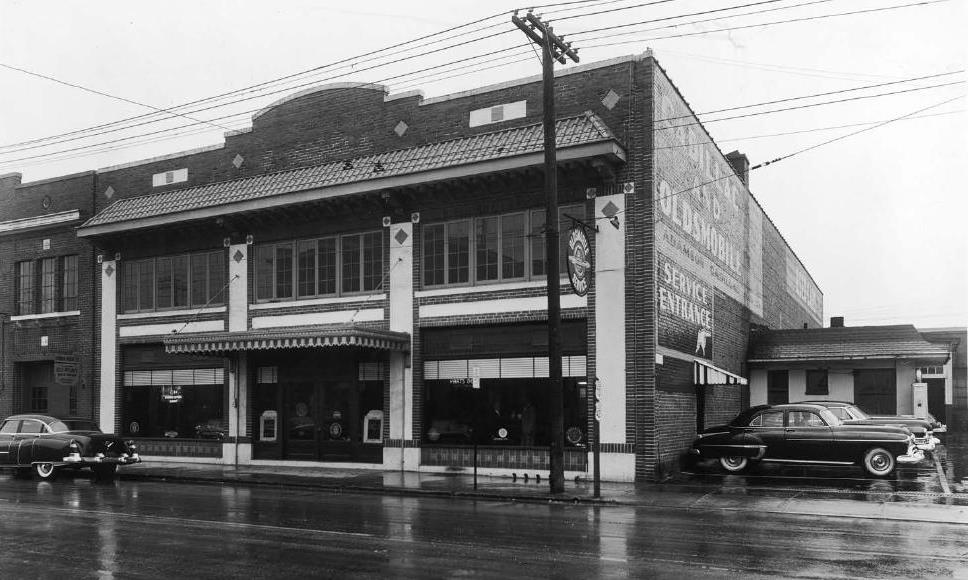 Often undervalued, an East Market Street building that reminds us of the early auto era is a step closer to listing on the National Register.

The Carolina Cadillac Company building is a two-story brick building overlooking East Market Street, Greensboro’s major east-west artery through downtown. It was built by Greensboro developer J. E. Latham using plans by architect Harry Simmonds. According to recent research completed by historian Beth Keane the building was constructed in 1923 as one of a cluster of auto-related establishments along the East Market Street corridor. The building is an example of Mediterranean Revival architecture, including stuccoed pilasters topped by diamond tiles and a central, arched pediment. The original small-paned and pressed-glass transoms are intact over the central entry and plate-glass display windows. A decorative, metal awning suspended over the entrance is an original feature.

Interior appointments are appropriately rich (as a Cadillac dealership), including two-story –high showroom, original black-and-white, diamond-patterned tile floor, and paneled wainscoting and doors. A wide central staircase rises to the rear of the showroom that splits to provide access to a second-level loft overlooking the room below.

The Greensboro showroom was a branch of the Winston-Salem Carolina Cadillac Company. In fact, the manager of the Greensboro franchise was Eugene Boyd (E. B.) Adamson, who came to the city from the position of the assistant bookkeeper in the Winston-Salem office. The Greensboro branch first operated with just one salesman, two mechanics, a janitor, and only four cars. Though the company declared bankruptcy in the Great Depression, it was reorganized under the name Adamson Cadillac and Olds Company. In 1955 dealership was sold to William H. Black, who renamed the company Black Cadillac and Olds, Inc. The Cadillac dealership moved from the East Market Street location around 1965.

The green light by the state is important for downtown Greensboro, where preservation projects have long focused on South Elm Street. Consideration for National Register designation is at the request of the building’s four owners: Chester Brown IV, Daniel Craft, Jay Jung and John Lomax. The consortium purchased the building in September, and has been awaiting a decision from the Advisory Committee. Rehabilitation plans for the building could include restoration of the 85-year old building’s façade to its original appearance. Listing to the National Register is contingent on the reconstruction of the decorative tile pent roofline of the façade, a key feature of the building. All rehabilitation work will need approval from the Restoration Branch of the State Historic Preservation Office in order to qualify for tax credits. Work can now begin on the formal request for National Register listing for the auto dealership.