Not Old Enough To Be Historic 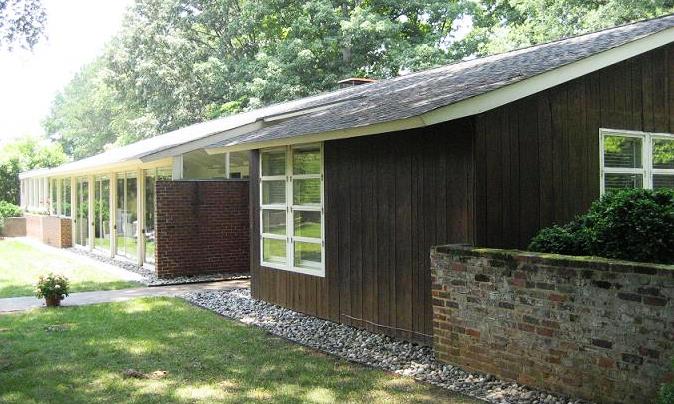 The easy ones are the old ones, the grand ones, and the famous ones.

The historic preservation movement has rarely been challenged in protecting superlative places. If it’s the oldest building in town, the grandest edifice, or if George Washington slept there, the preservation community receives the equivalent of a public opinion green light in preserving it. The challenge, however, lies in preserving the recent past.

Good contemporary architecture, always a precious resource, is often a victim of the rush to replace. Too new to benefit from the power of nostalgia but already old enough to look dated and shabby, buildings today become especially vulnerable when they reach 25 years old.

This is not a new cycle. Dozens of spectacular Victorian homes were destroyed in Greensboro during the 1950s and 60s as part of a campaign to modernize the downtown of North Carolina’s then second largest city. Not even Blandwood, the stalwart poster child of Gate City architecture was spared. When solicited for advice, Greensboro industrialist Ceasar Cone questioned efforts to preserve the mansion in 1964 by asking “Isn’t [Morehead’s] old homeplace an architectural monstrosity?”

The preservation movement has become savvier since those days, and in heading off egregious architectural losses, it has worked to embrace the recent past. Here in Greensboro, guided by institutions such as Preservation Greensboro, the University of North Carolina at Greensboro’s Department of Interior Architecture, and the Weatherspoon Museum of Art, appreciation of modern architecture has begun to grow. These efforts are not a moment too soon.

In May 2005, the Odell and Associates designed Burlington Industries Corporate Headquarters was imploded for replacement with the Shops at Friendly Shopping Center. The corporate campus had been recognized in 1974 by the South Atlantic Regional Council of the American Institute of Architects for its unique and distinctive design featuring massive crossed steel beams that symbolized the woven threads of textiles. A similar fate befell Odell’s 1966 Wachovia Tower in downtown Greensboro (image, right), on track to become North Carolina’s second Modernist skyscraper to be inscribed on the National Register of Historic Places in 2006. It was pulled from the designation process midstream when the developer decided to forfeit lucrative federal and state tax credits by recladding the innovative steel façade with balconies and mirrored glass. Neither project suffered from public outcry.

Recent events in Greensboro have begun to turn the corner in cultivating appreciation of the recent past. In 2004, the Downtown Greensboro Historic District was expanded to include modern resources, such as the Ellis Stone Department Store, a modernist architectural gem designed in 1949 by the New York firm Voorhees, Walker, Foley, and Smith. In October 2005, a symposium entitled “The Loewenstein Legacy” highlighted eight properties designed by hometown Modernist architect Edward Loewenstein (image, right). The event drew hundreds of Gate City residents to lectures and tours related to Modernism in North Carolina. In 2006, the Elon University School of Law opened its doors in a refurbished Loewenstein-designed facility in downtown Greensboro from 1960.

Within the past year, momentum has increased with UNCG’s city-wide “Closer to Home” exhibit highlighting the Modernist movement in Greensboro. Earlier this month, the North Carolina National Register Advisory Committee recommended designation of the Loewenstein-designed Wilber and Martha Carter House to the National Register of Historic Places (image, top). The 1951 Modernist residence was cited as the earliest identified Modernist house in Greensboro as well as Loewenstein’s first Modernist residential commission in the city; it will be the first Modernist house listed in the city if approved.

Additional work will likely cultivate additional appreciation for Greensboro’s recent past. Investigation is in progress to understand the Container Corporation of America building located on East Market Street (image, right). This remarkable industrial structure, designed by internationally acclaimed architect Walter Gropius in 1944, features trademark banded windows, multi-colored brick, and clean, plain walls. Another initiative includes a city-wide survey of architectural resources that includes Modernist designs for residences, churches, and commercial buildings. The survey will likely uncover themes and designs that will broaden understanding of the Modernist movement in Greensboro.

In most cases, no legal barriers prevent property owners from destroying landmarks of the recent past, though Preservation Greensboro has sought to persuade owners to preserve their sites. Though several Modernist buildings in Greensboro would likely be eligible for local Guilford County Landmark designation or National Register listing, only the owners of the Carter House have sought any recognition to-date.

In the meantime, owners of these important future landmarks can be encouraged to do the right thing by respecting the original design of their buildings. Protection of the recent past is an investment that will be enjoyed by future generations who will have no first-hand knowledge of the twentieth century. What currently is out of vogue will one day be precious. The future of historic preservation is in the recent past.