Life in the Fast Lane: Exotic Architecture Mirrors Notorious Past 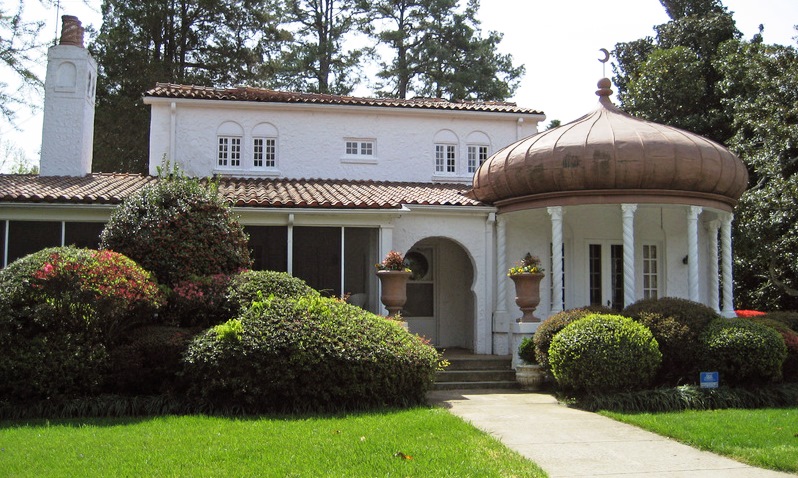 On the Greensboro Road in eastern High Point, there stands two exotic houses like no others in the Furniture City. Newcomers, if they catch a glimpse of the homes through the trees, marvel at their wonderfully unusual architecture. Old timers, however, remember one the homes as the site of one of North Carolina’s most sensational murders. Here at the Terry and Peggy Harper House, the unique architecture is matched by its intense and dramatic history.

Rewind to the early 1920s, when two High Point men, Terry Harper and J C Welch, met a pair of attractive showgirls in Chicago. The beautiful women fell in love with their newfound suitors and soon were engaged to be married. The future Peggy Calligan Harper was from Chicago; the future Wilna Welch hailed from New Orleans.

After marriage, both couples settled in High Point and commenced construction of two well-designed and eccentric houses in 1926. The homes were built side by side and designed by Glendale, California architect Clarence D. Tedford. They were the talk of the town not only because of their exiting out-of-town inhabitants but their dramatic architecture as well.

The Terry and Peggy Harper House was designed with an Arabian theme, featuring a keyhole entry, barrel-tile roof, and a turban domed front porch roof supported by spiral colonettes. The J. C. and Wilna Welch House was a bit more subdued, but featured a Spanish theme. Spanish style homes were popular in California at the time with movie stars as it was both luxurious and exotic. The two houses were stuccoed and originally painted pink, which only accentuated their stage presence on the Greensboro Road.

Both homes were opened for numerous and some say, quite memorable parties. They quickly gained a reputation as a place to see and be seen.

Tragedy struck at the Harper Home in 1931, however, that tarnished the exuberant spirit of the house. A Jamestown man, Charles Holton, had made the acquaintance of Peggy Harper. Mrs. Harper, by later newspaper accounts, decided to leave her husband and marry Mr. Holton. Two days before Christmas, Charles Holton was found by Mr. Harper in the Harper Home, and shot four times in the living room of the house.

Mrs. Harper’s account of the murder follows: “Mrs. Harper and Mr. Holton entered the living room together…Mr. Harper came in excitedly through a side door. She, fearing trouble, grabbed him as he passed the room door, but he knocked her down and rushed into the living room where there were a few brief words and then several shots rang out. Mrs. Harper got to her feet as quickly as possible and ran into the room and attempted to wrest the pistol from Mr. Harper, suffering a powder burn on one hand in the scuffle which started before Mr. Harper had fired the final shot from the pistol.”

Mr. Holton, in a statement before his death, stated that he had been set up. He claimed that Mrs. Harper asked him to the Harper residence where Mr. Harper awaited to discuss arrangements for a divorce with his wife. Upon entering the home, he said, he was ambushed by Mr. Harper and shot.

The trial captured the attention of newspapers for days, resulting in numerous “Extra” publications. Despite accusations that she was known as ‘Chicago Peggy’ (and all a nickname like that would imply) during her vaudeville days, Mrs. Harper was acquitted when the judge allowed a motion for non-suit in the murder charge against her. She remained a participant in the case, taking the witness stand in defense of her husband.

Mr. Harper had his own version of the evening, insisting that he found Holton sitting on his living room settee. When Mr. Holton sprang up and made for an end table with a pistol on it, he shot to protect himself.

After the Judge completed his one hour charge, the all male jury rendered a “not guilty” verdict after 27 minutes of debate. According to newspaper reports, the Judge “rapped for order in the courtroom suddenly gone wild in a demonstration of its approval of the verdict.” Mr Harper collapsed under the stress of the trial and was helped into the judge’s chambers while Mrs. Harper was carried into an adjacent jury room to recuperate.

Once the sensational trial had ended, attention centered on the future plans of the Harpers. Much to everyone’s surprise, the couple reconciled and remained in their home. In 1945 they moved to south Florida. Happy times did not remain at the adjacent Welch Home either. The Welches divorced in the mid 1940s and Wilna moved back to New Orleans.

Certainly, the fast lane did not lead to High Point in the 1920s. However, a few of the big city’s bright lights did shine in High Point during the Roaring Twenties in the form of exotic houses, big parties and ended in a scandalous trial. Today, the parties are over, the trial is forgotten, and the participants long gone, but High Point still has two fantastic houses as a reminder of faster times.