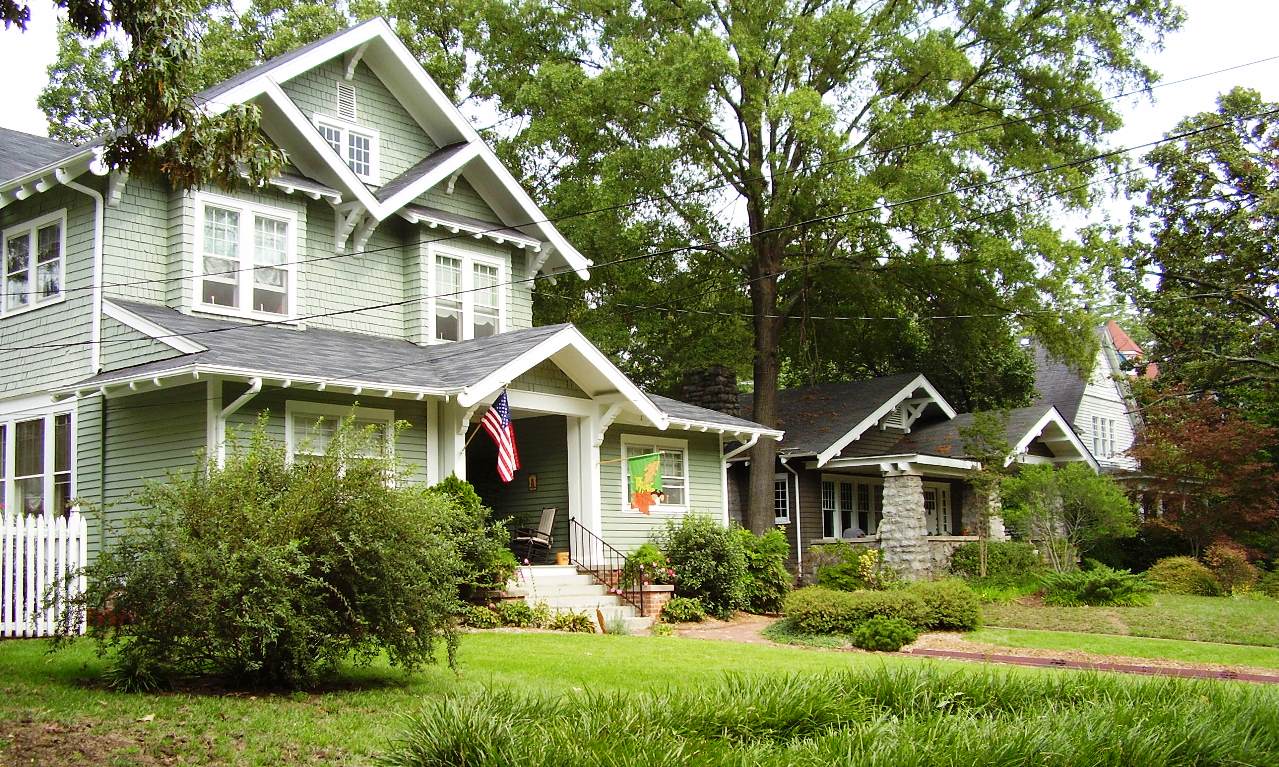 Fisher Park is one of North Carolina’s treasured places. Catherine Bishir, one of the state’s preeminent architectural historians, referred the neighborhood as “one of the state’s premiere streetcar suburbs” with “remarkably varied houses” as well as what she termed a “masterpiece”, the First Presbyterian Church. Bishir
integrated her laudatory comments on the Fisher Park neighborhood (right) to carefully include the richness of its houses and its institutions. As components of the whole, its residences and religious buildings create one of our states richest built environments, that stands as a testament to the accomplishments achieved by Greensboro residents by the 1930s.

Today, however, we are looking at the unfortunate predicament of having two of our great resources at odds with each other. The masterpiece First Presbyterian Church, designed by Hobart Upjohn in 1928-29, and recipient of an award by the North Carolina Chapter of the American Institute of Architect in 1930, is at odds with the
Historic District Program Manual and Design Guidelines enforced by the Greensboro Historic Preservation Commission, itself a role model in the state and steward of Greensboro’s second oldest historic district, designated in 1982.

Both entities have made positive contributions to Greensboro’s historic preservation movement. The First Presbyterian Church has kept its sanctuary (right) in an excellent state of preservation throughout its 80-year history at this site. It has remained a steward of its sanctuary while other congregations fled the center city for the suburbs. Additionally, the church has been a steward of its original nineteenth century burial ground, of which efforts have been heightened for this year’s Bicentennial celebrations. The Historic Preservation Commission has worked tirelessly for 30 years to preserve Greensboro’s historic center-city neighborhoods by fostering an environment that encourages reinvestment by homeowners and families.

With such superlative credits to both institutions, it would seem possible to arrive at a superlative compromise in terms of the preservation of the S. A. Holleman House at 701 North Greene Street. This is an important property to the nearby church because of its adjacency to the congregation’s campus. It is also of

great importance to the Fisher Park Historic District. The Holleman House (right) was erected between 1905 and 1910, making it one of the oldest homes in Fisher Park. Its paired Ionic columns, balcony and unusual 45 degree-angled entryway aligned to the street corner is a gateway to the historic district from downtown Greensboro. This house would be a handsome landmark in any neighborhood in the city, but it is part of the fabric of Fisher Park – and a defining feature of the district.

Compromises could include solutions that allow for expanded parking for church attendees in the lot’s side yard – along with rehabilitation of the historic house for new uses. It may be possible to develop a plan that would allow the church to remain the owner of the property, and invite a private investor to partner with the church to enjoy available federal and state tax credits of up to 40% of the value of the restoration. Such a partnership could be constructed to provide a positive cash flow that could be diverted back to the church for outreach initiates. If the Holleman House could be restored in this way – at little of no cost to the congregation while creating a cash flow – it would present a smart alternative to the nibbling away of the historic fabric of one of North Carolina’s treasured places. The property was placed on Preservation Greensboro’s Treasured Places Watch List in 2007.

One Wednesday, the Historic Preservation Commission delayed demolition of the Holleman House for one year in order to allow for constructive dialog between members of First Presbyterian Church and the city’s preservation community – including Preservation Greensboro. The leadership at First Presbyterian Church has shown interest in discussing financing opportunities, and that is a positive step. I hope that by working together in the spirit of our city’s Bicentennial celebration, we can assure that future generations will admire Fisher Park the same way we do today: as a whole.