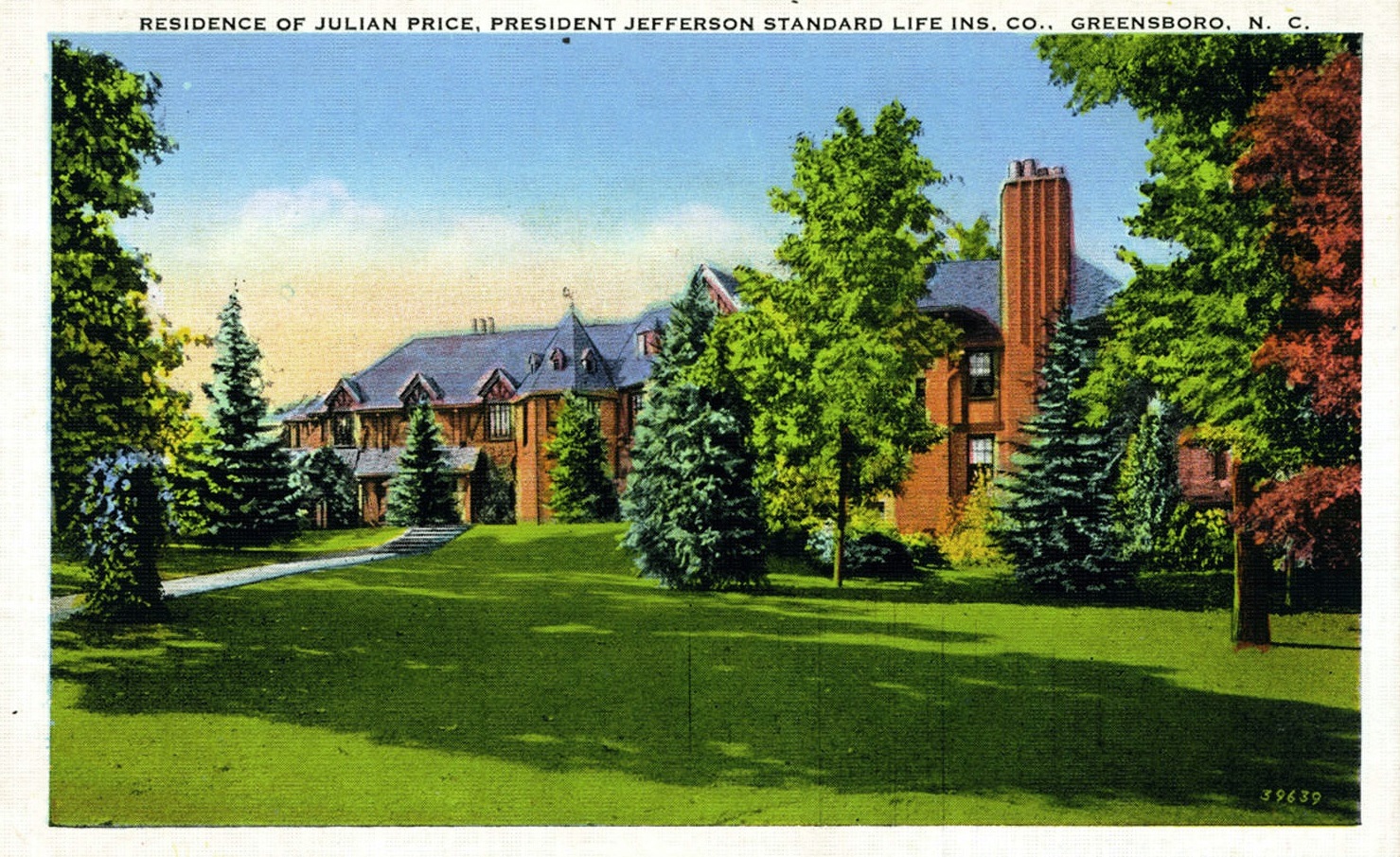 Hillside is a grand home in Fisher Park built by Julian Price that has been recognized by the North Carolina State Historic Preservation Officer to be of statewide significance.

The significance stems from the home’s builder Julian Price, a nationally known insurance executive, business and civic leader, and philanthropist who had a leadership role in many business enterprises and philanthropic causes across North Carolina and who developed one of the largest life insurance companies in the American South.

Julian Price (25 Nov 1867 – 25 Oct 1946) is most remembered as chairman of the board of the Jefferson Standard Life Insurance Company and philanthropist.  He was born in Meherrin, Lunenburg County, Virginia near Richmond, the son of Margaret Greene Hill and Joseph Jones Price. He was educated in a one-room schoolhouse in the rail-road stop village of Meherrin. It was with the railroad in which he found his first employment in cutting firewood for use by wood-burning locomotives. He learned Morse code and found employment as a telegraph operator and dispatcher for the Southern Railway. This position took him to North Carolina in 1895, moving first to Durham and shortly thereafter to Greensboro.

In Greensboro, Price took a position in 1903 a representative of the American Tobacco Company, though he was more intrigued by the insurance business where he found a position by 1905. In that year, he began working for the Greensboro Life Insurance Company. When Greensboro Life joined with Jefferson Standard in 1912, Price was elected vice-president and agency manager. He was promoted to president of the company in 1919 and served in that capacity for twenty seven years until 28 January 1946. When he took the position of president of Jefferson Standard in 1919, the company held assets of $9.7 million and insurance in force of $81.6 million. When he stepped down as president, the company held assets of $179.2 million and the insurance in force exceeded $672 million. At that time, Jefferson Standard ranked thirteenth in the nation among insurance companies.

Price held additional accomplishments outside of his presidency of Jefferson Standard. Governor Angus W. McLean (1924-1928) selected Price to head the North Carolina Salary and Wage Commission, which was instrumental in developing a fair system of employment and pay for state employees. He grew to become one of McLean’s most trusted advisors, and Price was mentioned as a successor to McLean as the nominee for the Democratic Gubernatorial ticket in 1928, but he refused to have his name placed in nomination.

Other business interests included a majority stake in the Greensboro Record, one of the city’s two leading newspapers. He held a role as president of the Atlantic and Yadkin Railway, a short line railroad within North Carolina from 1899 to 1950. It ran from Mount Airy southeast through Greensboro to Sanford, primarily serving the central Piedmont region.

Price also held civic memberships. He was a thirty-third degree Mason, an honorary member of the Patriotic Order Sons of America, and a life member of the Elks and the Sons of Confederate Knights. He was a commander of the Knights Templar and a member of the Southern Society of New York – a charitable and social organization. He was awarded an honorary doctorate of laws degree at the sesquicentennial of the University of North Carolina in 1946, just months before his death. During the ceremony, Frank Porter Graham, president of the university characterized Price as an “insurance executive and community builder who had a creative part in many business enterprises and philanthropic causes and who developed one of the largest life insurance companies in the southern states.”

Price had a statewide influence on business activities. He was one of the charter members of the Business Foundation at the University of North Carolina. The Foundation worked through the university to aid and promote research and education related to business interests across the Old North State.

Julian Price was a patron of architecture.  In 1919, New York architect Charles Hartmann came to Greensboro to design a Foor and Robinson chain hotel named the O.Henry Hotel on North Elm Street.  Price offered Hartmann the job of designing a major project, the corporate tower for Jefferson Standard Insurance if he’d move to Greensboro and open a practice. Hartmann accepted the offer and spent the rest of his life in Greensboro designing notable buildings throughout North Carolina.

Price sought to build the corporate tower for Jefferson Standard (image, right) as the highest building between Washington and Atlanta because he recognized the manner in which the public sought “to identify their financial institutions with impressive buildings that inspire confidence.” Pragmatically, he wanted all employees of his growing company in one building instead of being scattered in a half a dozen buildings all over Greensboro. The skyscraper cost $2.5 million, plus $177,000 for the land, both paid in cash. The insurance company occupied only five floors in the tower the rest was leased to doctors, dentists, lawyers, insurance agents, various clubs, and contractors. The eclectic architectural theme of the tower leans on Romanesque Revival design with rounded arches and Solomonic columns.

In addition to his company’s headquarters, Price selected Hartmann to design the Price family home,

Price was recognized as a prominent member of the Catholic faith in North Carolina at a time that Catholicism was modest in relation to protestant worshippers. He was introduced to Catholicism through marriage to Ethel Clay (1874-1943). Their forty-six year marriage ended when she died in October 1943. In memory of her life and faith, Price honored her with a $500,000 gift to construct Our Lady of Grace Catholic Church at 2205 W Market Street in the Sunset Hills neighborhood of Greensboro. The grand pink granite edifice was designed by Brooklyn, New York architect Henry V. Murphy, personally selected by Price for the project.

Mrs. Kathleen Price Bryan Edwards, a granddaughter of Julian Price, remembers an incident that reveals the personality of her grandfather. During World War II, Guilford County did not allow use of alcoholic beverages, and this was disappointing to local Air Force base personnel. One officer inquired of the name of the local bootlegger and was told it was a man named “Price.” The officer called Julian Price one Sunday afternoon and asked if he were the local source of liquor. Price asked what kind the captain wanted and when told, Johnny Walker, he asked the young officer, “Black or Red?”  “Black,” replied the stunned officer, who was then told to drive up to the back of the Price home on Fisher Park Circle. The captain could hardly believe his luck when he tried to pay, for Price said, “No, no, young man, nothing is too good for our boys in the service.” That afternoon the Air Force base was enthralled with the captain’s awed description of how well he had been received by Greensboro’s leading citizen, Julian Price, whose profession and community standing was so much different from the local bootlegger with which he shared his surname!

Price died as a result of injuries sustained in an automobile accident while travelling to his mountain retreat near Blowing Rock. In memory of their father, his children established a professorship in life insurance at The University of North Carolina; funded with an original endowment of $80,000, it was increased in value to $500,000 in the 1970s. Also, together with Jefferson Standard Life Insurance Company, they gave their father’s estate in near Blowing Rock to the US Government as part of the Blue Ridge Parkway, a site which is today known as the Julian Price Memorial Park.

The determination of the site as having statewide significance is an important one. As stated in the North Carolina General Assembly General Statutes, properties of this level of importance may be denied demolition or destruction. Other properties in Greensboro with statewide significance include the A North Carolina Agricultural & Technical State University Historic District, the Revolution Cotton Mill, and the First Presbyterian Church, Smith Memorial Building, and First Presbyterian Church Cemetery (Greensboro Historical Museum).