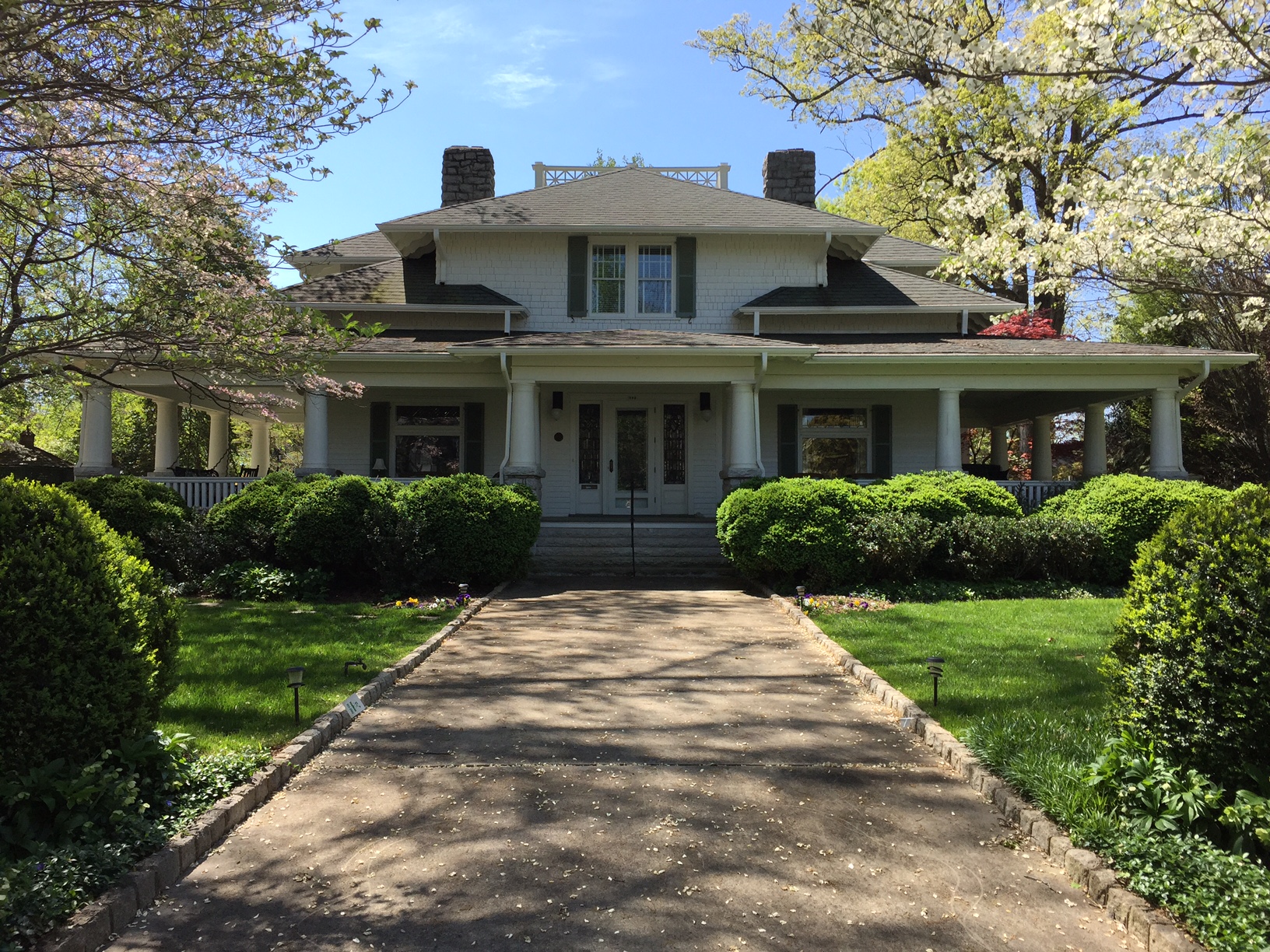 An air of mystery surrounds to McAdoo-Sanders-Tatum House at 303 Wentworth Drive. More than any other house in the neighborhood, it has a long and rich past, but the depth of its history is not completely understood. It is a house without a known date of construction!

Architectural historians have invesigated the history of the house for decades. Noted researchers including Ruth Little-Stokes and Marvin Brown noticed how different the house looked from others in the neighborhood in terms of design, materials, and its unusual floorplan. It has captured attention for its welcoming wrap-around porch, handsome granite stonework, and glittering lead-glass windows. The details, historians declare, might indicate it to be the oldest home in Irving Park!

The history of the house is recorded through oral history and in legal documents, but this narrative only adds to the mystery. The land on which the house stands was established before the earliest development of Irving Park. Colonel Walter D. McAdoo purchased 140 acres of land in March 1890. McAdoo was a prominent hotelier in the Gate City, and his his hotel, the McAdoo, was a primary fixture on South Elm Street from its construction in 1870 until he left its management in 1895. Neighbors along Wentworth recall a visit from a lady named “Ms. McAdoo” who visited around 1990. She stated that her father built the house around 1895. A previous occupant of the house, Walker Rucker, also believed it was built around that time as the McAdoos’ farmhouse.

Residents of Greensboro were fond of rural retreats in the late 19th Century. By maintaining separate urban and rural homes, residents could enjoy weekends in the countryside and enjoying wholesome living with cool nights. Perhaps Walter McAdoo had a modest retreat constructed in the 1890s at the time of his retirement from the hotel. The location of the house at the crest of a broad hill supports this premise, as early builders pragmatically selected the highest (and driest) sites for construction.

Any earlier house that stood on the site was heavily remodeled by McAdoo’s son William by 1912. William was a real estate developer, having constructed an office tower on South Elm Street. City directories indicate that William was living along North Elm Street by 1913. With no other streets yet laid out, North Elm Street was the nearest reference point. By 1916, a plat map of the “Country Club Development” including Country Club Drive and areas north references the existance of the “W.D. McAdoo Home”.

The earliest sections of Irving Park were platted in 1911, and these first lots were centered south and west of the McAdoo tract. The second phase of development, with associations to the noted landscape architect John Nolen, were laid out in the mid-1910s. It includes land north of the McAdoo tract, but not the land directly around the house. Wentworth Drive was likely an intermediate phase, which might explain why the blocks around the house are arranged in a grid form.

Architecturally, the residence blends Classical Revival themes of symmetry with horizontal lines of the Prairie style. Specifically, the half column front porch supports blend Craftsman and Neoclassical styles. The wide overhanging eaves and low hipped roofline is linked to the low and horizontal lines of the Prairie style. The symmetrical façade with a main entry flanked by sidelights is a reference to traditional forms of Noclassical Revival architecture. Interior appointments include a spacious living room with a grand mantel, a dining room with high wainscoting and a beamed ceiling, and a generous central hallway. The Mt. Airy Granite used in the foundation and landscaping were likely laid by legendary Greensboro stonemason Andrew Schlosser.

Historic documentation of the McAdoo-Sanders-Tatum House favors a construction date in the 1890s. In constrast, existing architectural evidence points to a completion date of 1912. Material evidence might one day be discovered in the bones of the house to reveal an earlier farmhouse that was absorbed into the early 20th Century structure. Regardless of its construction date, the house is recognized as an important structure and was inscribed to the National Register in 1994 as a contributing structure in the Irving Park National Register Historic District. It was purchased by Katie and Brian Bode in 2013, and its restoration in 2014 was recognized by Preservation Greensboro through a Preservation Award. Guilford County designated the house as a Landmark Property in 2015.

The house was open for tours in 2016 as part of Preservation Greensboro’s 6th Annual Tour of Historic Homes & Gardens.