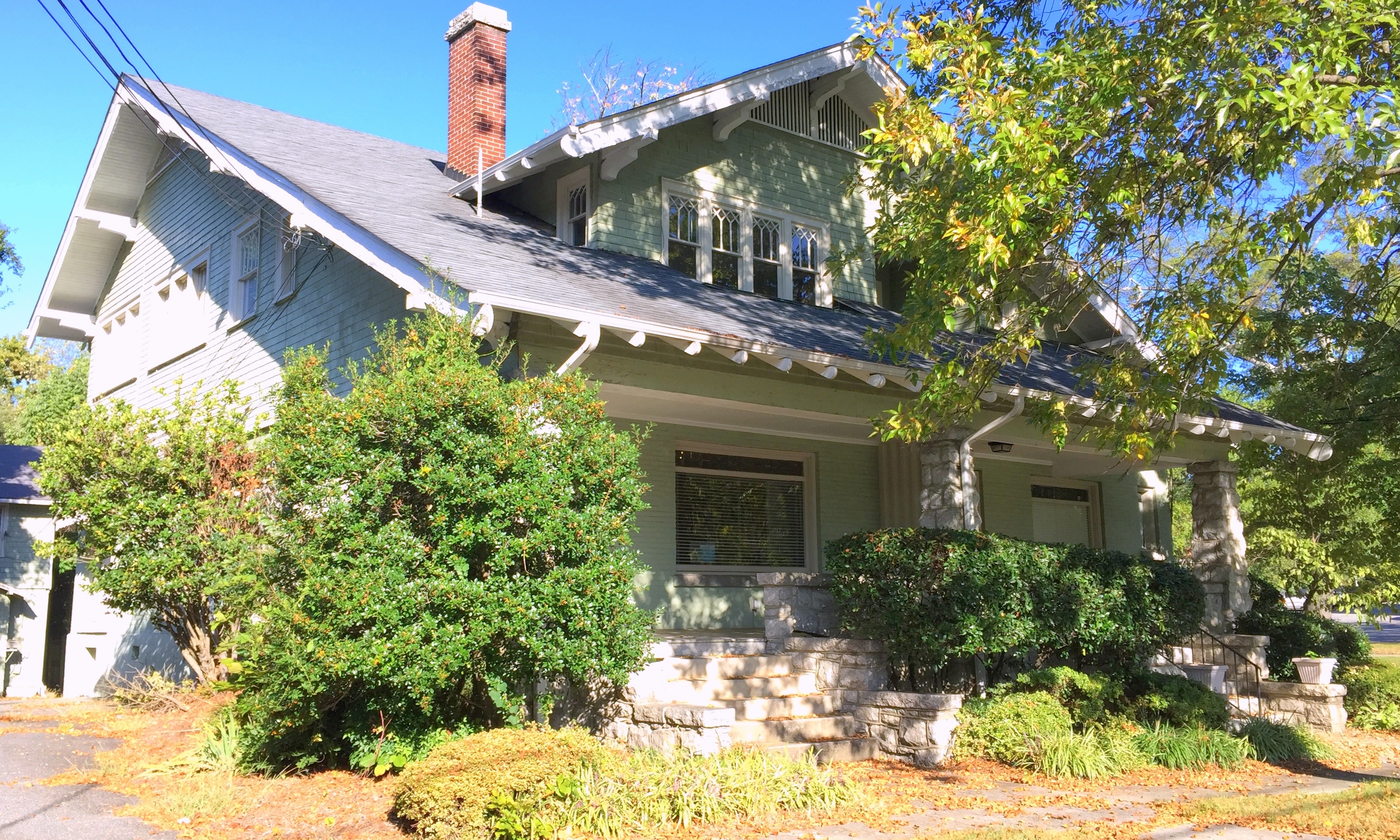 The Sellars House at 917 North Elm Street in the Fisher Park neighborhood is among Greensboro’s best examples of Craftsman architecture. It stands along a section of North Elm Street once reckoned to be Greensboro’s Gold Coast, and also features an interesting link to African American heritage.

The house was built in 1913-14 for Carl Dewitt Sellars and his wife Viola Fitzpatrick. C. D. Sellars was born on April 4, 1873, in Alamance County to Emma Virginia Murray, age 26, and William Baxter Sellars, age 22. Upon attending college, he was one of the nineteen students that comprised the first graduating class at North Carolina College of Agriculture and Mechanic Arts (today North Carolina State University). He graduated with a Bachelor of Engineering degree on June 14, 1893. He was employed in the sales department of the Cone Export and Commission Company and on December 15, 1913, he married Viola Fitzpatrick.

The Greensboro Daily Record reported on December 26, 1913, that “Mr. Carl D. Sellars and his bride, who was Miss Viola Fitzpatrick, have returned from their wedding journey to Northern cities and will be at home temporarily with Mr. and Mrs. J. F. Fonville, at 126 South Mendenhall street, until Mr. Sellars’ handsome residence on North Elm street is completed.”

North Elm Street from Fisher Avenue north to Wendover was a choice location for high income residences in the 1910s because the road hosted a trolley line and was convenient to the city center a mile south as well as the Greensboro Country Club a mile north. Prosperity in cotton, tobacco, and insurance fueled a race to build ever larger and more elaborate homes. In 1913 Frank Leak announced plans to erect a $6,500 home designed by architect J.H. Hopkins at 909 North Elm Street. W.L. Carter, secretary-treasurer of Gate City Life Insurance, commissioned a $15,000 Prairie-style home at 811 North Elm in October 1915. The following spring, Charles W. Gold, treasurer of Jefferson Standard Life Insurance Company, announced that he would build a $15,759 home at 817 North Elm Street designed by Harry Barton. Outdoing them all, tobacco magnate J.M. Galloway announced his intention to build a $30,000 house at 1007 North Elm Street, also designed by Harry Barton. Galloway later corrected himself to reveal a $60,000 price tag, and rumors floated that the actual cost was $100,000! These grand homes spurred locals to call this stretch of North Elm Street Greensboro’s “Gold Coast.”

Tragically, Carl died in 1919 during gallstone surgery in Greensboro when he was 46 years old. Ownership of the residence was transferred to his younger brother, Lacy, who lived there with his wife Evelyn until 1944. Lacy has acquired the corner lot just north of 917 North Elm in 1915 – perhaps to erect a home, but appears to have lived with his brother Carl and sister-in-law just before taking ownership upon Carl’s death.

The Murray family was prominent in Alamance County history. The Murray and Lea families lived in a community north of Graham and Mebane known as “Cross Roads.” There, they operated several family plantations and grew involved with county politics. Their role in Alamance historyturned a new chapter in 1976 when Pulitzer-Prize winning author Alex Haley published a novel entitled “Roots” that documented his family lineage through ancestors such as George (Chicken) Lea, his daughter Matilda McGregor Lea Murray, and her son Tom (Lea) Murray. Tom Murray was Haley’s great-grandfather. As a skilled blacksmith, he was tied the Andrew Murray planation in Cross Roads. Like many enslaved workers at the time, he took his enslaver’s surname. After emancipation and the defeat of the Confederacy, Tom Murray and his extended family trekked west to Henning, Tennessee, the town in which Alex Haley was raised.

This was the Murray family in which Emma Virginia Murray was born. Her father was James Eli(sh) Murray of the Cross Roads Community, and her mother was Nancy Shulta Oliver Lea. Eli’s brother was Andrew Murray.

Though the Sellars house has a notable history, it is also an important example of Craftsman architecture.

Two other homes in Fisher Park were built around the same time and in the same style as the Sellars House. The Charles D. Benbow house at 104 Fisher Park Circle was completed in 1913. The house was described as “a 12-room bungalow, modern and beautiful, and is a lovely ornament to the Fisher Park section of the city.” The E. Colwell House was begun in 1913 and completed the next year. It, too, features shingle siding, a low roofline, and diagonal knee braces that support wide overhanging eaves. The attractive trio of stylish homes may have helped spur a large number of Craftsman houses to be erected across Greensboro in the following 20 years.

The Sellars House is part of the Fisher Park National Register Historic District, and is under consideration for purchase by “Youth for Christ,” an organization that works with young people to develop lifelong followers of Christ and commitment to social involvement. The organization currently has offices at 824 S. Aycock Street in the Glenwood neighborhood.