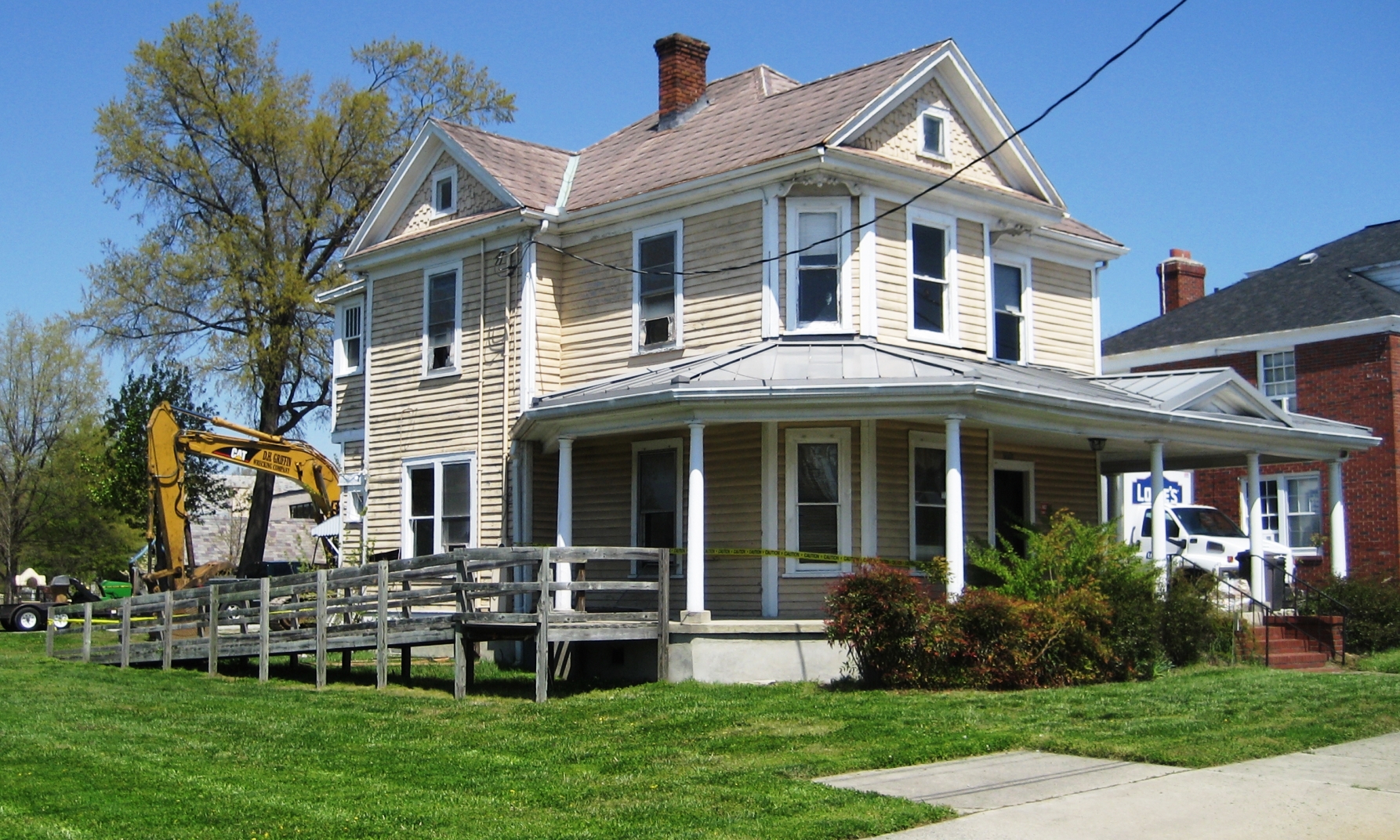 The bulldozer emblazoned with the demolition contractor D. H. Griffin and parked behind the house at 210 West Smith Street (image, below) says it all. Another one bites the dust in the Fisher Park neighborhood…all for an parking empty lot.

For those who value the built environment, the historic neighborhood, and Greensboro history, this scene is a painful routine that has continued for decades. An historic house – in this case a residence that was constructed approximately 110 years ago – is being sent to an area landfill … to be replaced by a surface parking an empty lot.

It seems there should be a solution to this practice by now. It’s 2009. Citizens across the city understand that tearing down such old houses has been cliché since Joni Mitchell popularized the song “Big Yellow Taxi” in 1970. Hasn’t Greensboro found a better solution over the past 40 years?

Fisher Park was established at the turn-of-the-twentieth-century, and features some of Greensboro’s most historic homes. For protection from parking lots (and other intrusions), it was recognized by City Council as an historic district in 1982, but the district’s lines were drawn in a way to protect the core of the community, not its fringes. This home stands, literally, on the edge. No permission nor approval is needed to remove it from the cityscape.

Holy Trinity Episcopal Church has been a neighbor in Fisher Park for over 80 years. The landmark sanctuary was designed by Hobart Upjohn, a prominent New York City architect. As members of the congregation have relocated far from downtown Greensboro, demand for land has increased dramatically. Historic houses along Simpson, Fisher, and Smith streets have fallen to bulldozers clearing space for Holy Trinity expansions over the past few years. The congregation has completed splendid restorations along Fisher Avenue within the district, but the fate of this house has not been so lucky. It might be a pile of rubble by next week.

Help could be on the way, if dialog is still possible. Preservation Greensboro is planning a strategic partnership with a national organization from Philadelphia known as Partners for Sacred Places. The group is well-known for bringing preservation and religious organizations to the same page through discussion, planning, and programming…to avoid the head-on conflicts that seem to occur annually in heritage neighborhoods such as Fisher Park. Greensboro needs a new model for dealing with the needs of congregations within historic districts. Sacred Places might be able to provide valuable insights from a national theater to our city.

In the meantime, enjoy this morsel of history while you still can. As Mitchell sang “Don’t it always seem to go that you don’t know what you’ve got till its gone.”

The duplex at 206-208 Smith and 210 W. Smith Street were owned by a man named Turk. He bought the Queen Anne from Cora Love, age 102. Turk reportedly moved to Rome, Italy and may now be deceased. His name “Turk 1988” is carved in stone at the Queen Anne beside the back door. Turk worked hard to preserve these buildings and his name is also carved in stone on the inside base of the columns of the duplex at 206-208 W Smith Street.

UPDATE 4/21/09: The house was destroyed, as predicted, over Easter weekend. I appreciate the dialog I had with a citizen who is invested in this project, who has explained to me that Holy Trinity “is not putting a parking lot on the site. A community garden is going in the place. Depending upon which plan is ultimately adopted there will likely be a building on the spot. Our development plans generally have parking at the core of the block.” As a result, I have ammended my entry (a first) to reflect the fact that the usage of the lot would not be for parking. In the meantime, it will remain empty.