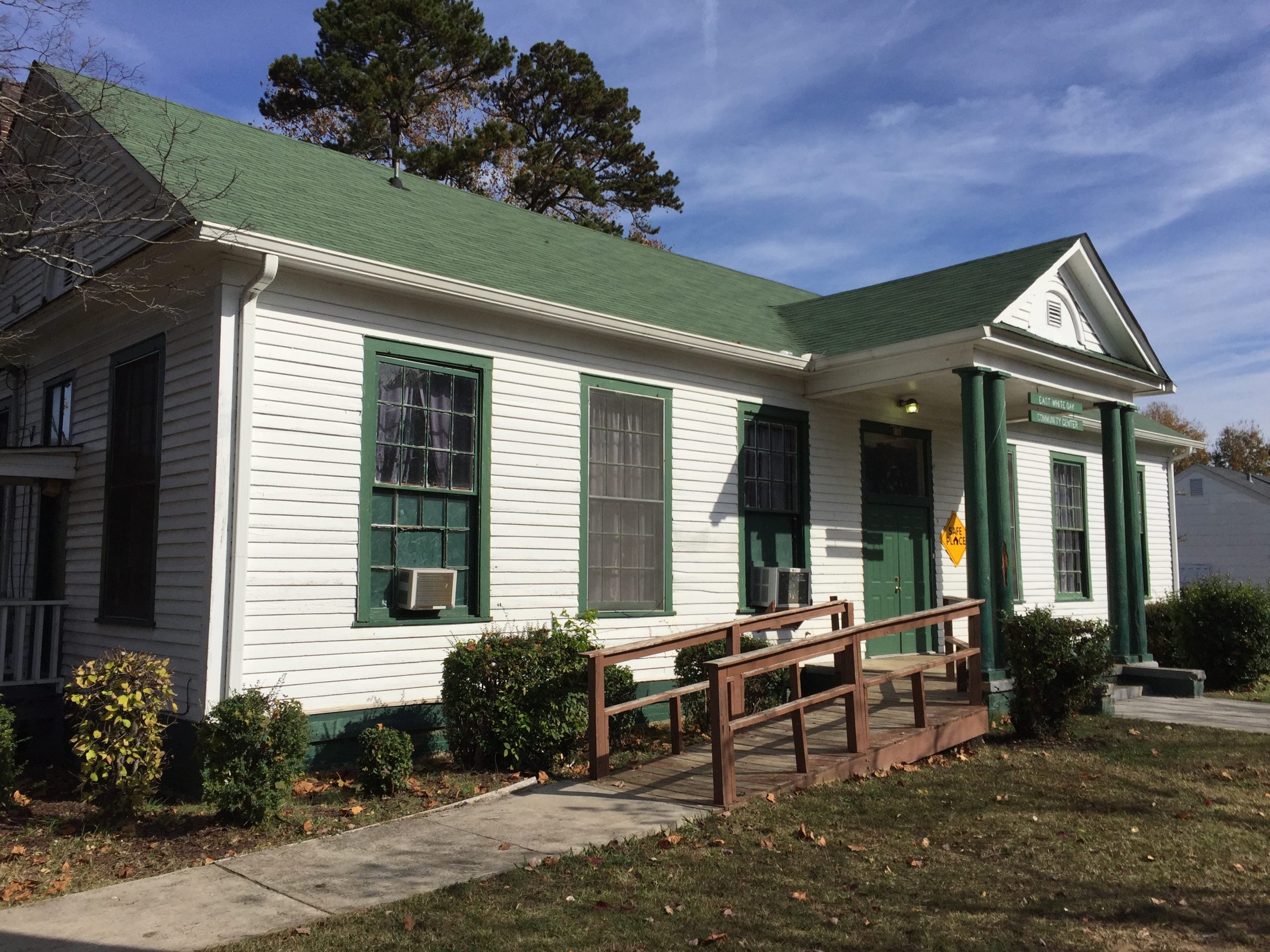 The East White Oak School was constructed by the Cone company in 1916 to serve grades 1-5 for children of African American workers who resided in the surrounding community as employees of the Cone mills. It has been on the National Register since 1991 based on Criteria A – through associations with events that have made a significant contribution to the broad patterns of our history – specifically Black history. Interestingly, the building is owned by a small nonprofit established in 1956 to preserve the structure and today it serves low-income community surrounding the site as the East White Oak Community Center. The fact that the building was preserved by community action as early as 1956 is an important note in Greensboro’s history – the holding organization pre-dates the formation of Preservation Greensboro by a full decade.

The East White community was recognized as early as 1907 as “Mucktown” or “Mukden,” “a [N]egro settlement just east of White Oak” with informal associations with the Cone company. By 1916, the Cone company embarked on the creation of a segregated mill village “east of White Oak which is devoted to homes for negro laborers employed in the villages…” A newspaper article in the Greensboro Daily News of October 27, 1916 announced “during the past month 33 new homes have been constructed there.” The article continues “There are few mill settlements anywhere in the country where more careful attention is given to making good homes for the employees than the mills adjacent to Greensboro, a fact which has attracted nationwide attention. No portion of Greensboro is cleaner than the mill villages and few people live under better conditions of sanitation and comfort than the villagers.”

Days later, an article in the Greensboro Daily News on November 3, 1916 was headlined “Another Precedent For The Cone Mills: In Model Settlement School House Has Been Built and Is in Operation Now.” The article described the as having an enrollment of 70, clarifying “The Cone mills, northeast of Greensboro, have established another southern precedent, in adding to their excellent school system for their villagers a model school for the children of the [N]egroes employed in the mills. This is, as far as known, the first time a cotton mill management in the [cotton] belt where [N]egroes are segregated in the public schools, taken the step to give the [N]egro race advantages similar to those which many mill owners have given their white villagers’ children.”

The arrangements between mill (company) and employees was complicated in the South. Not only were Black generally excluded from jobs in the mill with the exception of unskilled positions, but all mill employees were often paid through company credit that could be expended on housing and for purchases in the company-owned store. As a benefit to attract employees, mill companies could offer special conveniences or benefits such as gardens, churches, recreation spaces, and schools for use by company employees.

The description of the East White Oak community touches on boosterism as a demonstration of civic pride in Greensboro and to support for the largest employer in the city, the Cone interests. The article described East White Oak as “on a delightfully high ground, and it is here that the [N]egroes who are employed in the mills live. They live in contentment because they have the best sort of homes, better that their own race enjoys in the city proper for the most part, and equal in comfort and conveniences to those provided for the village white people in the model mill villages nearby.”

The school is described as a centerpiece of the community. “The Cone interests have constructed 60 tenements in this locality and it is in the midst of the homes that the school house, a model of its class, was erected. The school has two teachers and it has been open since October 1, sufficiently long for the promoters of the educational enterprise to judge of how it was received by the people for whom it was built. The test has been met satisfactorily. There are now 70 pupils enrolled and the attendance and progress of the students are highly satisfactory.”

The reference to the school as “a model of its class” might be a reference to Rosenwald initiatives across the South. Julius Rosenwald, a philanthropist of the Jewish faith, was inspired by Booker T. Washington to believe that education was the key to the success of Black people. Accordingly, he contributed heavily to that cause. He began funding the construction of schoolhouses in 1912 and his support grew in scope and scale in the years that followed. His expanded efforts led to the established the Julius Rosenwald Fund in 1917 and by 1919, the fund had grown to $30 million. The Fund focused on assisting the construction of schools for blacks in states across the South, and North Carolina had more Rosenwald Schools than any other state.

The comparison between the Jewish Cone family of Greensboro and the Julius Rosenwald is a curious footnote in Greensboro history. Were the Cones inspired by Rosenwald to erect a school for the betterment of the Black employees’ children?

The school was a point of pride for East White Oak as its school population soared to 123 in 1925 and a new teacher were hired.

The building is remarkably well-preserved and serves as a touchstone to early Guilford County educational structures. The one-story, frame building features a simple and symmetrical seven-bay façade of large 12 over 12 windows to admit daylight to interior spaces. The building was originally T-shaped, and in the late 1920s or 1930s one-story additions were added at either side of the rear wing, changing the plan of the building from a T to a rectangle. Generally, finish details were continued in the new additions. The interior of the school initially held two classrooms within the main block that were separated by a narrow hallway that led to the rear ell. The partitions of the hallway have been removed and some smaller rooms have been partitioned to provide offices in the westernmost portion of the building. By the 1930s an auditorium that sometimes doubled as classrooms occupied the rear ell and a classroom was located in the western addition. By the 1990s, the auditorium was divided into smaller rooms, including a kitchen, a cloakroom, and bathrooms. Beadboard sheathed walls have been covered by plasterboard.

The school was decommissioned around 1946 because it was a smaller and privately owned (by Cone). East White Oak community students were transported to the Jonesboro Elementary School on Raleigh Street just north of East Market Street because it was a public school and contained only Black students within Greensboro’s segregated school system. The East White Oak School was converted by Cone to a YMCA for Black members in the years just after World War II. In 1955, Cone Mills Corporation sold their real estate around the school to Hillside Homes, Inc., which continued to rent to occupants. Without necessary maintenance, the wood-frame houses quickly deteriorated and nearly all of the original houses were destroyed by the early 1980s. Today, the house sites are occupied by pre-manufactured housing.

Today the East White Oak School remains under the ownership of the nonprofit organization East White Oak Community Center, Inc, established in 1956 to provide programming that is relevant and meaningful to the families of the surrounding community. Staff and community supporters continue to stabilize and preserve the structure for extended use. To aid in their efforts, in 2017 Director Alice Drake called on support from Preservation Greensboro Incorporated (PGI) staff and PGI board member Sunny Gravely, and Sunny’s father architect Clinton Gravely (a former PGI board member), to orchestrate a plan to provide for much needed preservation of the building. To that end, in 2018 PGI coordinated efforts to have a service project completed at the school by the National Window Alliance (image, right). The group was able to reconstruct and re-glaze the historic windows.

That early initiative worked to leverage additional support from the Covington Foundation and the Cemela Foundation to help with painting, air conditioning, and rehabilitation efforts. It is hoped additional partners will emerge, such as the City of Greensboro, and other private community foundations. The historic East White Oak School reveals an important story related to Black history, Jewish history, children’s history, and textile history. The site continues to serve as a touchstone for historical equity and as a beacon of history for its surrounding community.