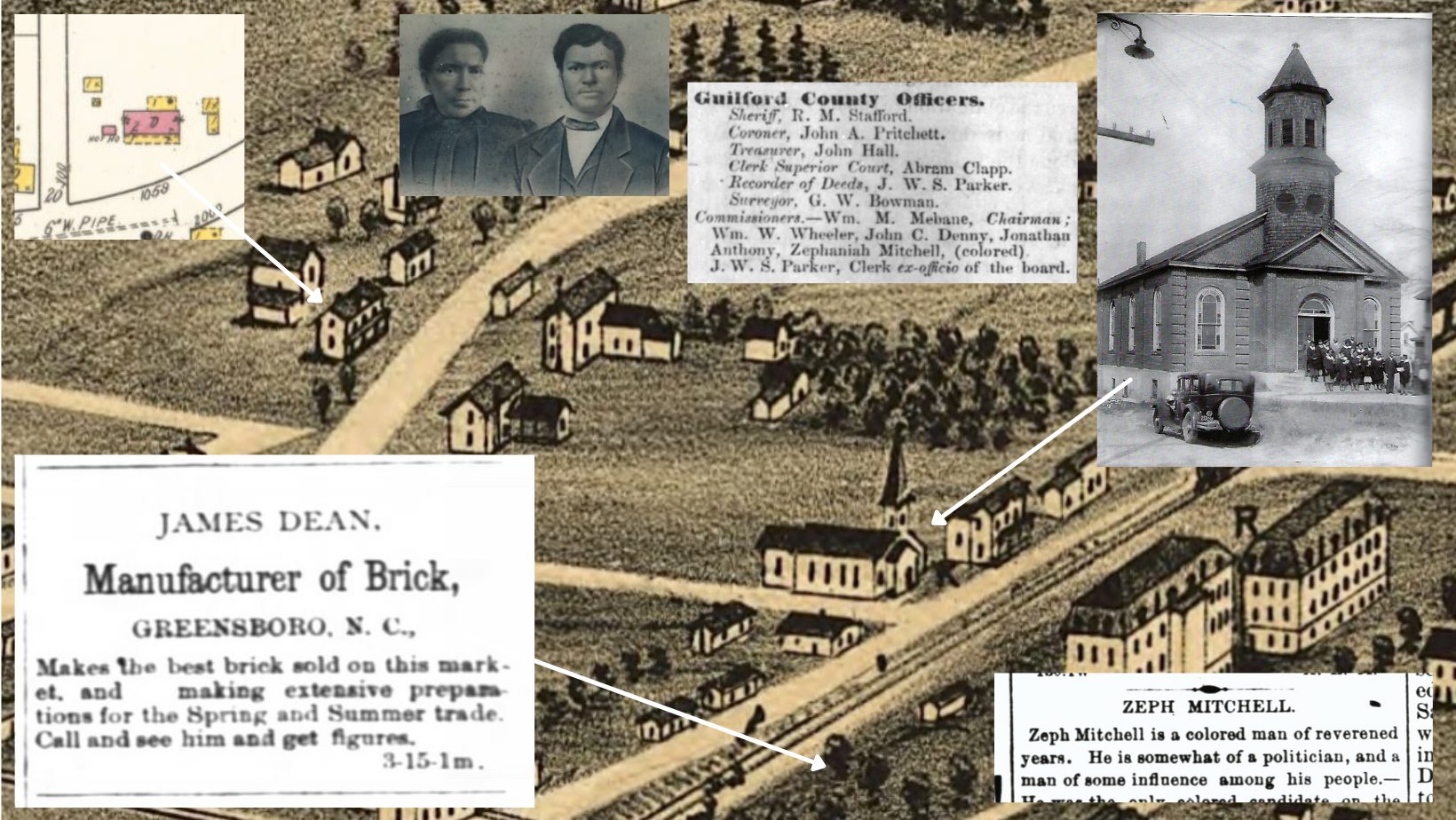 In Greensboro and Guilford County during the nineteenth century, the Mitchell and Dean families contributed themes of influence and agency as free people of color within the context of legalized slavery and disenfranchisement. Working from their positions within the building industry – specifically brick making and masonry — male family members found their voice through artisanry, politics, and religion that exceeded traditional abilities of many Black and mixed-race citizens in the community at the time. The first part of this two-part series reviewed the life of Zephaniah L. Mitchell. Part two is a review of Mitchell’s son-in-law, James M. Dean.

Wilson was a notable white minister who lived in a grand house that remains standing at 102 South Mendenhall Street in Greensboro’s College Hill neighborhood. The Reverend was the Presiding Elder of the Raleigh District of the North Carolina Methodist Conference and a leader of the General Conference of the Methodist Episcopal Church, South. He was also a member of the board of trustees of the University of North Carolina as well as Greensboro College, where he served as president from 1873-1882. The prominence of the Dean’s minister might indicate a level of status held by the Mitchells or the Deans in Greensboro.

James M. Dean was born July 27, 1834 in Randolph County. His descendant Sylvia Stanback documented her family history on a website entitled Archival Seedlings in which she explains “James Monroe Dean, Sr. is my great grandfather. Mr. Dean [Senior] had a son by a white woman while he was enslaved. Mr. Dean’s son [Junior] was born in Asheboro, North Carolina, but his son later relocated to Greensboro, NC. The white mother of James Monroe Dean, Junior gave his father land so that he would be considered a ‘freedman.'”

Census data for Lucinda and James in the 1860 Federal Census indicates the couple lived in Greensboro next door to her parents. Both were 26 years of age and by that time had two children, Margaret (age 5), and John (age 2). The family’s personal estate was valued at $50. James had no profession listed.

By 1868, Dean was 34 years old, and his father-in-law, Zeph Mitchell, was the first Black man to be elected to a position on the Guilford County Board of Commissioners. As his father-in-law found agency as an elected politician, Dean found influence through political appointments. Governor Holden appointed Dean as a magistrate in 1868-1869. In July 1868 he was qualified as a Justice of the Peace for Gilmer Township (East Greensboro) in Guilford County. In July 1869 he ran on the Republican ticket for Gilmer Township School Committee and was defeated in November 1869. However, two conservative Democrats who won the vote refused to serve, and Dean was appointed by the Guilford County Board of Commissioners to fill a vacated seat on the School Committee. As such, Dean may be the first Black member of a public school governing committee in Guilford County.

The 1870 Federal Census reveals that James Dean was a professional shoemaker. He and Lucinda’s family had grown to include five children: Margaret (age 15), John (age 12), Geneva (age 7), Mary (age 5), Sarah (age 3), and Horace [Harrison in error] (age six months). The Dean’s personal estate had increased to $300. Dean’s shoe making business was vibrant, with a capital investment of $100 and two employees. His specialty was leather boots and shoes.

During the 1870s, James Dean was named in several property transactions. He acquired 25 acres of land from Joseph Shields (in Shieldstown) in 1873 and purchased seven acres north of the North Carolina Railroad from Jeduthan H. Lindsay of in 1875. This later purchase could have been land on, or adjacent to, the site of the Dean and Mitchell residences. The 1879 city directory indicated the extended families lived on East Market Street.

The Dean’s house, likely erected in the 1860s or 1870s, remained standing in 1919 when it was included on a map made by the Sanborn Insurance Company in the first year the area beyond 1000 East Market Street was surveyed. The two-story brick house was addressed at 1059 East Market Street and stood on the north side of the street aligned with Dean’s Alley, which extended south across the North Carolina Railroad tracks to Bennett College. Several wood frame outbuildings stood on the property in addition to a brick “hot ho[use].”

Nearby, on land formerly owned by Zephaniah Mitchell, the Providence Baptist Church was likely erected by Mitchell or Dean, as both were accomplished builders within the congregation. Church tradition states that the Reverend Abe Cowan directed construction a one-room frame building in 1871. Four years later, the congregation of Providence Baptist Church erected on the same site a substantial brick structure that faced south overlooking the North Carolina Railroad tracks and was topped by a 50-foot-tall wooden tower. Congregants state that the sanctuary was the first brick and mortar structure for Blacks built in the state. The building was demolished by government-funded urban renewal in 1964, according to a 1992 article on the church published in the Greensboro News and Record.

An illustrated “Bird’s Eye View of the City of Greensboro,” created in 1891, depicts the neighborhood in which the Deans lived, including the location of their brickyard, the Providence Baptist Church, and Bennett College.

With the death of Zephaniah Mitchell in 1881, his will conveys “to my beloved daughter, Lucinda Dean, wife of James Dean…” a parcel of land east of Greensboro on the stage road to Hillsborough, today known as East Market Street. The Deans sold this property shortly after Mitchell’s death.

As early as 1879, Dean’s Brickyard is referenced in the City Directory at East Washington and Gilmer streets. The 1880 Federal Census for Non Population recorded James Dean’s brick yard as the largest in the county, valued at $500 and employing 18. As a point of comparison, the brick yard owned by D. M. Kirkpatrick was valued at $100 and employed 10.

By 1899 the brick yard was given the address of 115 South Maple Street. An advertisement placed in the Greensboro Daily Bugle in May 1883 promoted “James Dean. Manufacturer of Brick, Greensboro, N.C., Makes the best brick sold on this market and making extensive preparations for the Spring and Summer trade. Call and see him and get figures.”

In addition to brick making and masonry, Dean was also a real estate developer. In 1891 he acquired land east of Bennett College and developed it as a 67-lot subdivision. The primary north-south street, then known as College Street, is now known as Bennett Street. The second north-south road, named High Street, and the primary east-west street Gorrell Street, remain under the same names today.

Though no longer in politics, Dean remained active with social issues and education. In the 1880s, Dean is referenced many times as a Gilmer Township representative of the Central Campaign Committee of the Guilford County Prohibition Association. And in 1889, Dean won a bid to construct an addition to the one-story brick graded schoolhouse for Black students on Percy Street.

As a respected individual, Dean was selected as a juror at least twice and served as a “poll holder” in the 1890 elections. Curiously, a partisan political document printed in Greensboro ahead of the 1888 or 1890 election included the name of James Dean as one of 600 “COLORED VOTERS registered at Greensboro, — Gilmer and Morehead Townships” to “challenge” ahead of election day. The partisan flyer is thought to document African American influencers in Guilford County who were to be intimidated from voting.

As an active builder in Greensboro, Dean sometimes had to deal with realities of client liquidity. In 1896, Dean filed a claim with the county Superior Court against the A.M.E. Zion Church, which was erecting a building on a 50’ by 100’ lot on East Washington Street at Gilmer Street. The claim forced the sale of the land and an “unfinished building” by public auction to “satisfy the said execution and costs.” Apparently, the church ran out of funds before completion of the structure. A Sanborn Insurance Map of January 1902 indicates A. M. E. Zion’s brick church standing at the northwestern corner of East Washington and Gilmer Street, presumably the project found funding needed to see completion.

In the 1900 census, the last to include James Dean before his death in 1902, he and Lucinda are listed at their family residence at 1059 East Market Street and both 65 years of age. James remained a brick mason, owner of his residence, and able to read and write. By this time, their household included their son Horace (age 28) and his wife Alice and their son Edward; their daughter Sarah L. Logan, her husband William and their children Irene and Dean; and one additional grandson named William James.

James Dean is interred at Union Cemetery on South Elm Street. Union Cemetery is Greensboro’s earliest known black cemetery. It is adjacent to the Warnersville neighborhood and was named in the 1880s for practical union of St. Matthew’s Methodist Church, St. James Presbyterian Church, and Providence Baptist Church for a common burial ground. The cemetery, estimated to contain 1200 graves, was added to the National Register of Historic Places in 1993. Dean’s gravestone is impressive—an obelisk—with his date of birth as July 27, 1834 and his date of death August 24, 1902. Lucinda died in January 1911 in their home of “old age.” She was 76 years old.

James Monroe Dean and his father-in-law Zephaniah L. Mitchell, who is profiled in part one, are representative of broader themes in Black history. As free citizens, they made their living in highly skilled trades such as making brick, masonry, and hand crafting shoes. Leveraging their roles in the community during Reconstruction, they aligned with the Republican party to make early gains in broader representation and social equity before being pushed out of power by Democrats with the resurgence of white conservatives the 1870s. Both Mitchell and Dean held influential roles in the rise of Black-centered religion and Dean held an important – though temporary – role in education. Both men maintained a degree of agency in their lives and worked to extend that empowerment to others in Greensboro’s Black community.

Though no known structures exist in which to honor their lives, institutions and places remain as echoes of their influence and contributions to the community.

Part One reviews the life of Zephaniah Mitchell.