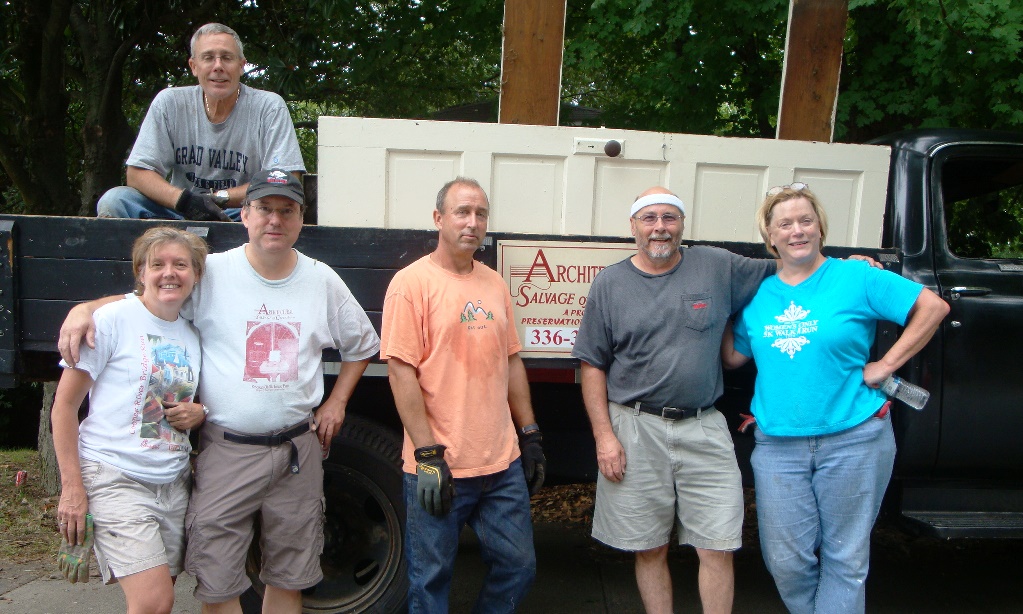 Preservation Greensboro has a national reputation among preservation organizations through several initiatives, including America’s earliest Tuscan Villa, Blandwood Mansion, and the Blandwood Ball. However, a great deal of attention is centered upon a grassroots initiative to save elements of Greensboro’s historic homes slated for the wrecking ball. Architectural Salvage of Greensboro has grown into a role model for recycling nationwide, and helps to raise the profile of Greensboro as a cutting edge city in the Green movement.

Architectural Salvage of Greensboro (ASG) was started in 1993 as a project of Preservation Greensboro. The purpose of the venture was to rescue and recycle materials from historic structures when they are remodeled or demolished. The idea for a salvage program came to Greensboro in the early 1980s, but affordable warehouse space could not be located at that time.

ASG came about in the early 1990s as a suggestion by the Friends of the Depot, Inc, an organization charged with utilizing the vacated Southern Railway Depot on East Washington Street. The upstairs baggage claim area was vacant at the time, and unheated. The Friends agreed to rent the space for $150 per month. The City of Greensboro invested $10,000 through a Community Development Block Grant to upfit the space to meet code. A steering committee was composed of members from PGI, the City of Greensboro, Greensboro’s historic districts as well as other older neighborhoods, and other preservationists.

The warehouse opened in 1994. A “Saving Worn Architectural Treasures” (S.W.A.T.) team was formed to collect material from pre-demolition sites, and remove items such as bathtubs, mantles, doors, windows, and occasional antiques. Buildings have been donated by the City of Greensboro, UNCG, local churches, and private homeowners throughout the city and as far away as Winston-Salem and Sanford.

Benefits to the community were immediate. Donors received a tax-deduction for building elements donated to ASG, which is a recognized non profit organization under PGI’s federal tax identification number. Historic homeowners and contractors found ASG’s showroom to be a resource for quality restoration projects. Historic building components have been reused in new construction as well. In 1996, ASG reported more than $9,000 in retail sales, with $1,000 of profits directed to the PGI Restoration Fund, as well as purchase of the 1955 Ford F500 flat bed truck, named “Bessie.”

In 1997, the City announced plans to return the railway depot to its original use. This included relocation of all tenants of the depot, including ASG. ASG volunteers commenced negotiations with the city to assist them in finding a suitable and affordable location in which to relocate. The old Packard dealership at 300 Bellemeade was identified in 1998 as suitable for the new home of ASG’s operations. Expenses were costlier than the rental rates at the old Depot. Since that time the city of Greensboro has allocated financial support to help cover the operation costs of the organization.

In recent years, ASG has contributed to the dialog of historic preservation throughout Guilford County in meaningful and measurable ways. In salvaging dozens of houses around the city, ASG has motivated hundreds of volunteer hours and saved more than 20 tons of house parts from going in to city landfills. This saves the city in terms of disposal costs, and extends the lifespan of existing landfills by reducing the volume of deposited materials.

ASG continues to bring positive press to Preservation Greensboro, including a feature in the July|August 2006 issue of Preservation, the official magazine of the National Trust for Historic Preservation in Washington, DC. Additional coverage in The Chronicle of Philanthropy, a publication of the Chronicle of Higher Education also in Washington, DC, profiled ASG as one of a handful of models nationwide that have achieved their charitable purpose through innovative programming.

Article edited 2015 to reflect new location. Since 2014 the ASG Showroom has been located at 1028-B Huffman Street in East Greensboro.