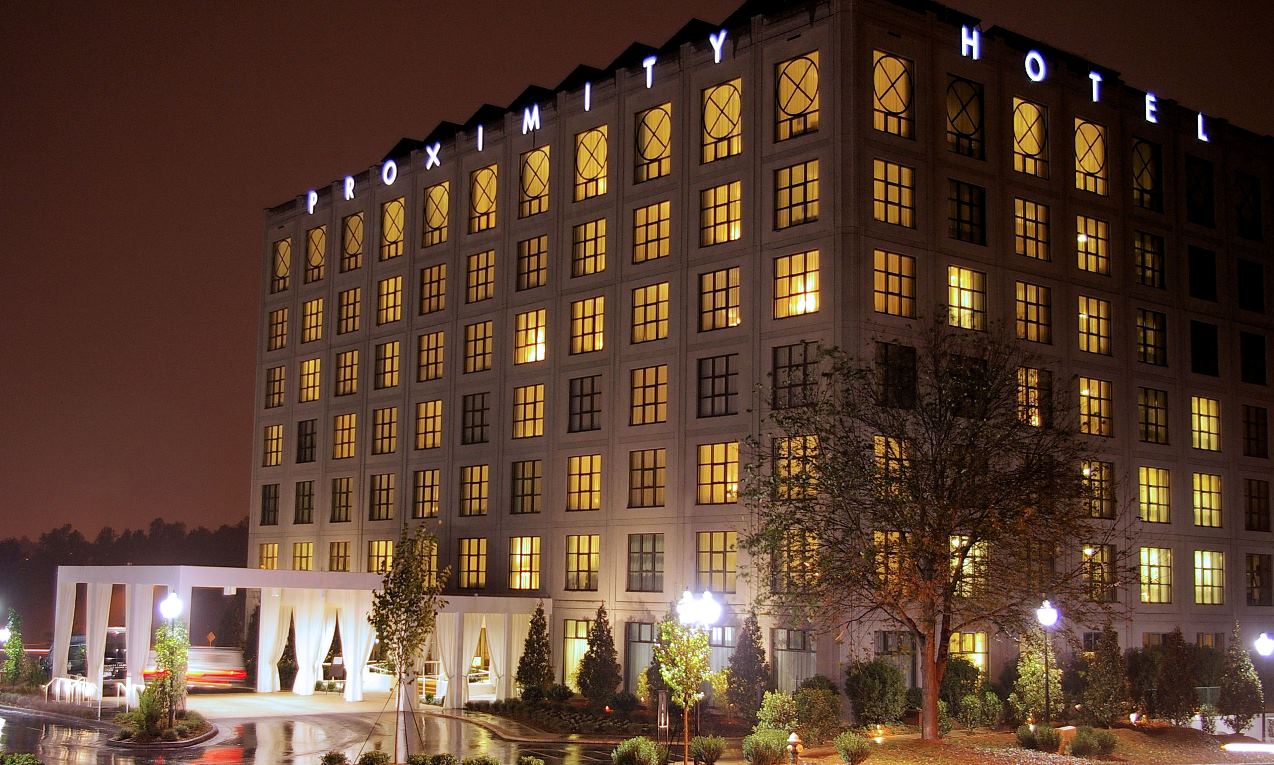 Architecture enthusiasts have observed for some time that Greensboro’s progressive design prowess reveals itself in fits and starts. Periodically the avant-garde of North Carolina architecture (exemplified by A. J. Davis’s Blandwood 1844, Walter Gropius’s East Market Street Factory of 1944, and Odell Associates Burlington Industries Headquarters 1972 [destroyed]), some would opine that Greensboro has fallen into a slumber of boring design lately. While the rest of the world is experiencing a resurgence of exciting and dynamic architecture, they taunt, Greensboro has barely maintained the status quo in contemporary design.

However, if you know where to look, progress can be found in corners of the city to illustrate that Greensboro has not truly become Greensboring. The statistics look dim: the city did not win any of this year’s 5 Merit Awards or 5 Honor Awards issued by the American Institute of Architects North Carolina chapter, recognition that instead went to places such as Fayetteville, Charlotte, Elizabeth City, Mount Pleasant (SC), and Atlanta (GA). Raleigh received recognition for four of the ten awards in 2007. In spite of this record, progressive architecture (though often unrecognized professionally) can be found in the Gate City.

Proximity Hotel
This project at 704 Green Valley Road by the Quaintance-Weaver company is Greensboro’s most high-profile representation the global trend towards “green” design in architecture (image, top). The hotel’s design is evocative of mid-twentieth century textile mills, however this inspiration has been abstracted beyond “cut-and-paste” historicism to incorporate solar panels along the roofline and utilitarian elements including the main porte-cochere and a courtyard garden. The deeper significance of this project has been its adherence to guidelines of the Leadership in Energy and Environmental Design (LEED) Green Building Rating System. ™ LEED is a standard for the design, construction, and operation of buildings that have a low impact on our natural resources. For example, some of the ways in which energy is conserved through building construction include utilization of solar energy to heat water, the use of large windows to utilize natural light, use of recycled building material, and use of high-efficiency Kohler plumbing fixtures. It is expected that the hotel will become a demonstration site for sustainable practices including tours and outreach programs for students of all ages.

While Center City Park at 200 North Elm Street incorporates themes and details inherent to Greensboro’s ecology and culture, it has also been designed to represent the city as a progressive and open place of diverse citizens. With local guidance through J. Hyatt Hammond Associates, Halvorson Design Partnership, Inc. of Boston was selected as lead park designer. The firm is known worldwide for innovative designs that are “place-making” and unique to their settings. This was accomplished by using native materials such as brick and granite, native trees and shrubs such as white oaks and pines, deigning a watercourse evocative of the Piedmont’s streams, and by incorporating works created by local and national artists in the park’s features. For example, Jim Cooper designed an urn fountain, Judy McKie created “bronze bird” benches, and Fred Johnston contributed works of pottery that represent the Piedmont’s folk pottery tradition. Center City Park is at once an authentic expression of early twenty-first century design that incorporates elements of Greensboro’s unique character and aspirations.

North Carolina A & T State University School of Education
The most notably progressive project in Greensboro in decades, the School of Education is currently rising in the 100 block of North Benbow Road on the eastern side of the A&T campus.

Scheduled for occupancy in spring of 2008, the 64,000 square foot building was designed by Freelon Architects of Durham, and has already won recognition from the AIA Charlotte and the AIA North Carolina as a work in progress. The Education Building is organized into two parallel masses flanking a central atrium. The western mass primarily contains faculty offices, while the eastern wing contains classrooms. The classroom mass cantilevers over an adjacent plaza to define a gateway to the campus green. The central atrium is conceptually at the heart of the scheme and serves as the social hub of the building. This energetic building focuses to the future, not to the past, and is appropriately set within the context of a university campus that has long embraced architectural modernism.

New York Times architecture critic Nicolai Ouroussoff recently commented on New York’s once-faltering architectural prowess by saying “For decades I’ve been whining about how far New York has slipped behind other world cities in the support of serious architecture. While Abu Dhabi, Shanghai, Beijing and even Paris have been pushing the boundaries, churning out one adventurous building after another, our city was wallowing in a swamp of pseudohistoricism and corporate mediocrity that — to skeptics like me, at least — threatened to transform it into a dull theme park for the superrich.” Today, New York seems to have turned a corner, at least in Ouroussoff’s opinion, with numerous projects announced across the city that will redefine the city’s streetscapes and skyline.

Greensboro seems to be making the same movement towards an architectural reawakening exemplified by projects such as the Proximity Hotel, Center City Park and A&T’s School of Education. Take a quick trip outside of Greensboro, and you can see where we this momentum could lead. New York, Chicago, and Charlotte sport recently constructed wonders that change color, defy gravity, and take forms never before seen. Check out New York’s Time Warner Center

on Columbus Circle at night (image, right) incorporating illuminated LED color-changing panels into its facade. Or, take a look at Aqua, an 83-story condo being constructed in Chicago – its watery façade evocative of ripples on a pond. Even nearby High Point has entered into the world’s dialog on design with the Natuzzi Building on West Commerce Avenue. It’s the only American work of Italian architect Mario Bellini, who gave the building the form of a ship’s bow.

Comments made here recently by Chicago Tribune critic Blair Kamin summed up the state of Greensboro’s architecture succinctly. “If your city’s buildings are third-rate, then the image of your city will be third-rate.” If our city’s image is third rate, how will we compete with Charlotte and Raleigh, let alone Atlanta, New York, and Shanghai? The three projects revealed here certainly boost efforts in reclaiming the Gate City as a creative, dynamic, and progressive place. All three are first-rate buildings worthy of any first-rate city. The challenge is to make sure these projects do not fade into the landscape as part of the “fits-and-starts” that have characterized our city’s architectural past, but that the quality of these projects initiates become a standard of a mature and confident city that expects nothing less than best for itself.